Once heard, the exotically-named Linnaeus Tripe is difficult to forget. Yet even in his own lifetime and certainly in the century and more since his death in 1902, appreciation of one of the most accomplished photographers in 19th-century India has been restricted to a limited circle of photographic and architectural historians. A comprehensive survey exhibition of his work, to which the British Library was a major lender, has been on show at the National Gallery of Art in Washington and the Metropolitan Museum of Art in New York over the past nine months. The third venue of this exhibition, opening at the Victoria and Albert Museum on 24 June, will give British audiences the opportunity to see some 70 examples of his work from Burma and South India.

Tripe entered the Madras Army in 1839, and probably learned photography during his first furlough to England in 1851–53. A small number of photographs taken in England during this period survive and in early 1853 he also became one of the founding members of the Photographic Society of London. But it was his return to India that saw the creation of his first extensive body of work. In late 1854 he travelled across country from Bangalore in the company of another early amateur photographer Dr Andrew Neill to make a detailed photographic survey of the extravagantly sculptured Hoysala temples at Halebid and Belur. These photographs received glowing reviews when they were exhibited in Madras in 1855 and paved the way for a major photographic commission from the authorities in Calcutta.

In the course of three wars of encroachment between 1824 and 1885, the expanding imperial domain of British India swallowed up the Burmese empire. After the conclusion of the second of these conflicts in 1853, it was decided that a mission should be sent to the Burmese capital, high up the Irrawaddy at Amarapura, to attempt to persuade the new Burmese king Mindon Min to ratify a treaty transferring the conquered territory of Pegu to British rule. While no great hopes were entertained for the success of this objective, it was seen as a rare opportunity to gather information about a country hitherto largely closed to western penetration. The Governor-General Lord Dalhousie considered that a visual record of the journey ‘would convey to the Government a better idea of the natural features of the neighbouring Kingdom of Burmah than any written report’ and that ‘sketches of the people and of cities and palaces … would give a life and interest to the future report of the Mission.’ To this end the artist Colesworthy Grant was chosen to accompany the mission (the resulting watercolours are held in the Library’s collections, shelfmark WD540). Photography had also recently begun to be encouraged and sponsored by the East India Company for the documentation of Indian architecture and Tripe, considered ‘very highly qualified in his field’, was also selected for the mission.

The party with its military escort steamed upriver on the Irrawaddy in August 1855, bearing as well as personnel and supplies, 59 crates of gifts designed to impress and gratify an eastern potentate. These included textiles, jewels, candelabra and swords, as well as more diverting amusements such as musical birds, a pianola and a polyrama (a popular optical toy presenting, in this case, dissolving views of Paris by day and night). Scientific instruments, including telescopes and sextants, were selected with the queen in mind, since she was known to be of a ‘scientific turn’ with a particular interest in astronomy. News of photography had by this time also reached the Burmese court and to satisfy the king’s interest in ‘sun pictures’ a complete set of daguerreotype equipment was also to be presented to him. Whether this last give was ever used seems doubtful, however, since Tripe’s attempts at teaching photography to one of the king’s servants were abandoned through lack of time and the man’s ‘desultory’ attendance at the lessons.

In the course of the mission’s journey, and over the six weeks it remained in residence at the capital, Tripe produced over 200 paper negatives of Burmese scenes, which represent photography’s first extensive encounter with Burma. While senior officials negotiated politely but ineffectively with their Burmese counterparts, Tripe produced around 50 photographs of the Burmese capital and the surrounding country. Within a few years Amarapura was to be abandoned in favour of a new capital a few miles upriver at Mandalay and Tripe’s prints constitute a unique documentation of the city and its environs before nature reclaimed its stupas, walls and palaces. 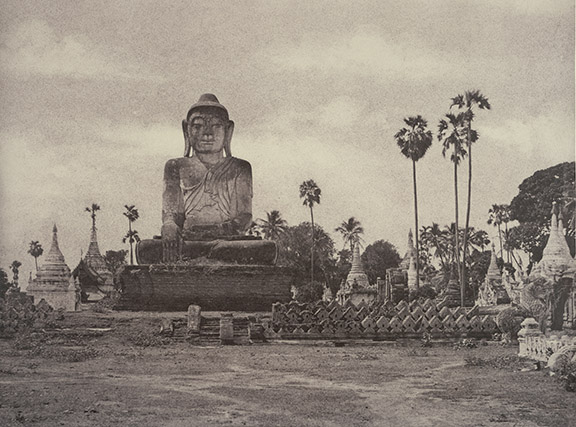 Tripe also explored as far upriver as Mingun, photographing King Bodawpaya’s grandiose and crumbling stupa (never completed and severely damaged by the earthquake of 1839). On both the outward and return journey the mission also stopped to survey the great plain of temples at Bagan—monuments of a previous ruling dynasty—and here Tripe made the first photographs of the principal landmarks of the site. As the mission’s secretary Henry Yule later wrote: ‘Pagan surprised us all. None of the previous travellers to Ava had prepared us for remains of such importance and interest.’ Their hurried tour also found time to note the elaborately carved wooden architecture of the monasteries, ‘rich and effective beyond description; photography only could do it justice.’ 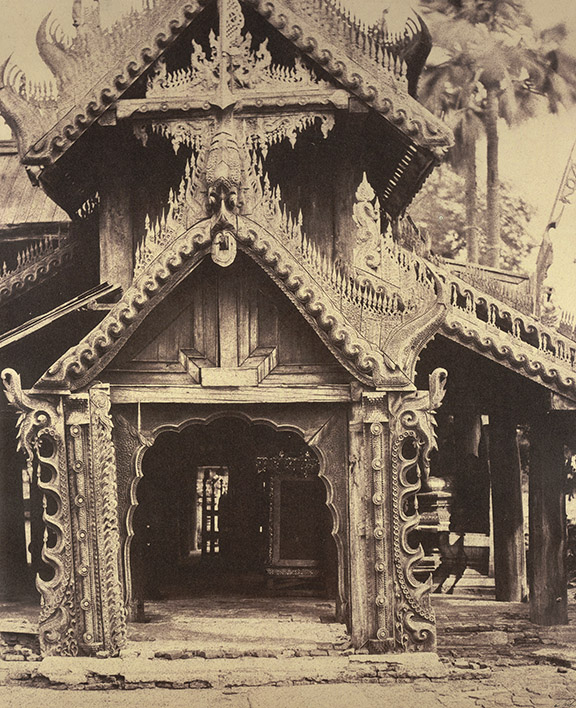 On the mission’s return to India, Tripe set about printing 50 sets of a portfolio of 120 selected Burmese views, a massive labour that was not to be completed until early 1857. Each paper negative had to be individually exposed in a frame in sunlight before developing, fixing and mounting the resulting print on card. To add to his labours, Tripe (or his Indian assistants) meticulously retouched many of the images, improving the appearance of foliage and the skies. The photographic chemistry of the period—predominantly sensitive to the blue end of the spectrum—tended to produce over-exposed and starkly blank skies. To remedy this, Tripe skilfully added skies and clouds by painting directly onto the surface of the negative, a remarkably effective technique that adds character and interest to these subtly toned studies of Burmese architecture. The demands of such work—involving the manual production of more than 6,500 mounted prints—are a striking demonstration of Tripe’s adherence to an aesthetic vision far beyond the requirements of pure documentation. In March 1857 Tripe’s dedication was rewarded by his appointment as Government Photographer of Madras, his principal task being to service the growing demand for reliable visual evidence of India’s architectural heritage—in his own words, to ‘secure before they disappear the objects in the Presidency that are interesting to the Antiquary, Sculptor, Mythologist, and historian.’ In succeeding decades photography was to become a standard tool of record for the work of the Archaeological Survey of India, but Tripe was to be the most distinguished of a small band of photographers who spearheaded these first—often faltering—initiatives. In mid-December 1857 Tripe left Bangalore with four bullock-loads of supplies and equipment on a demanding four-and-a-half month tour through rough country that would take him as far south as the great temple city of Madurai, before heading north-east to reach Madras at the end of April 1858. During this great loop through the modern state of Tamil Nadu, he visited and photographed major temple sites (among them Srirangam and Thanjavur), as well as hill forts, palaces and the occasional striking landscape. Among the most remarkable of the 290 negatives from this journey—not least in terms of technical ingenuity—is the 19-foot long panorama, composed from 21 joined prints, recording the inscription running around the base of the Brihadeshvara Temple at Thanjavur.

By August 1858 he was once more at Bangalore, setting up his establishment to print up the results of his travels. With the government’s agreement and subsidy, these were made available in a published series of nine slime folio volumes devoted to specific locations, the pasted-in prints accompanied by descriptive letterpress by several different authors.

Tripe had envisaged a wider and more ambitious photographic project, which as well as architecture would encompass ‘customs, dress, occupations … arms, implements, and musical instruments’ and, where appropriate, ‘picturesque’ subjects. But his employment as Presidency Photographer coincided with the economies imposed in the aftermath of the Uprising of 1857–58. In mid-1859 Sir Charles Trevelyan, recently appointed Governor of Madras, shocked by the expense of such large-scale photographic production, ordered an immediate end to Tripe’s activities, declaring them ‘an article of high luxury which is unsuited to the present state of our finances.’ By the spring of his 1860 his establishment had been wound up and his staff and equipment dispersed. 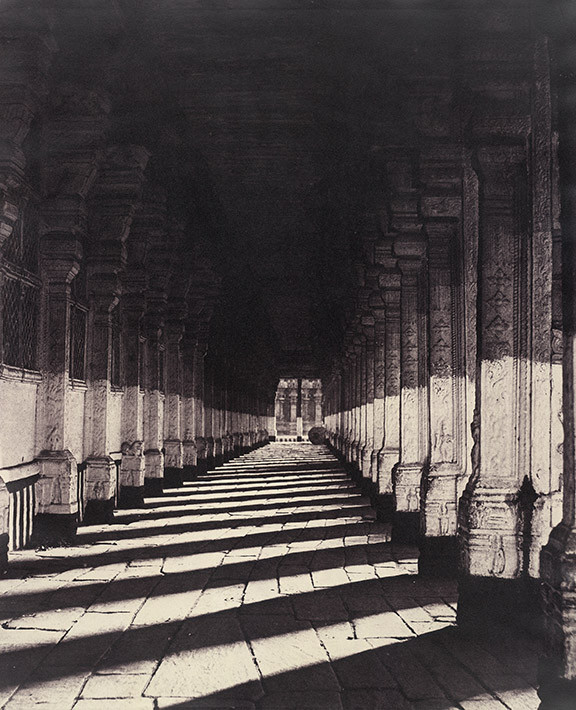 The abrupt termination of his appointment, coming at a moment he considered merely the start of his photographic ambitions in India, must have been a bitter blow to Tripe. In response he appears to have abandoned photography entirely, apart from a minor series of views taken in Burma in the early 1870s. But in a photographic career effectively lasting little more than five years, Tripe had created a body of photographs that is now recognised as among the finest architectural work produced in the course of the 19th century. His interpretation of architectural form, revealed in a characteristic use of long receding perspectives and a sometimes near-abstract balancing of light and shade, was accompanied by a rare mastery of the paper negative process. His care in printing has meant that many of his images survive in near pristine condition and allow the modern viewer to appreciate the full beauty of 19th-century photography. Tripe’s original negatives also survive at the National Media Museum in Bradford (two examples are shown in the present exhibition) and detailed accounts of Tripe’s activities in India can be found in the Madras Proceedings of the India Office Records at the British Library. All these sources have been assiduously mined in the production of the exhibition and in Roger Taylor and Crispin Branfoot’s handsomely printed catalogue, which together give full if belated recognition to the sophisticated artistry of a major figure in photographic history.

Henry Yule, A narrative of the mission sent by the Governor-General of India to the Court of Ava in 1855; with notices of the country, government and people (London: 1858)

The majority of Colesworthy Grant’s watercolours of Burma and Tripe’s photographs of Burma and India can be seen online at http://www.bl.uk/onlinegallery/onlineex/apac/index.html.