In the Thai manuscript painting tradition, Gautama Buddha was widely represented in scenes of the events of his previous lives, known as the Jatakas. Special importance was often given to his last ten existences before he was re-born as Siddharta Gautama. This Thai manuscript (IO Pali 207) dates from the 18th century and is a fine example of how small collections of Buddhist texts were combined with illustrations from the last Ten Birth Tales of the Buddha in folding book form.

Given to the India Office in 1825, this is perhaps the earliest acquired Thai manuscript in a British collection. A note at the end of the manuscript states that it was “Presented by Ltt Coll Clifford by the hands of W Wigram Esqe, 9th Dec 1825”. Lt. Col. Miller Clifford served in the British Army during a long career beginning in the West Indies in 1794. In 1824 he was with the 89th Regiment of Foot in the first Burma war, which was where he must have acquired this fine Thai manuscript. Wigram was a director of the East India Company.

Scenes from the Suvannasama Jataka, symbolising the virtue of loving kindness. It tells the story of Suvannasama who looked after his parents after a poisonous snake caused them to lose their sight. While fetching water for his parents, the king of Benares was hunting nearby and accidentally killed Suvannasama. His parents pleaded with the gods to restore his life, and due to his extraordinary merit he came indeed back to life and the king was forgiven. The parents also regained their eyesight. British Library, IO Pali 207, f. 6

The illustrations in this manuscript are related to the main part of its text, the Mahabuddhaguna, which explains the ten Great Perfections of a Buddha. The Ten Birth Tales are symbolic representations of these Great Perfections. In addition to this text, which covers 37 folios, the book contains other selected short extracts from the Tipitaka.

Scenes from the Candakumara birth tale, which stands for the perfection of forbearance, show a ritual plotted by evil court Brahmins to sacrifice Candakumara by burning him on a pyre, but Sakka (Indra) descends from heaven to interrupt the ritual and to destroy the evil Brahmins. British Library, IO Pali 207, f. 14

The Ten Birth Tales of the Buddha are well-known as Thotsachat or Sipchat  in Thailand. The last of them, called the Great Birth Tale (Mahachat) is the most important and best known. Its proper name, Vessantara Jataka, is after the name of its hero, Prince Vessantara. Its narrative embodies the greatest of all Buddhist virtues, that of giving or charity. Re-telling and paying attention to recitations of the Great Birth Tale are regarded as acts of  merit-making, and its recitation by monks is usually the occasion for a great celebration that lasts a full day and night, or even several days. 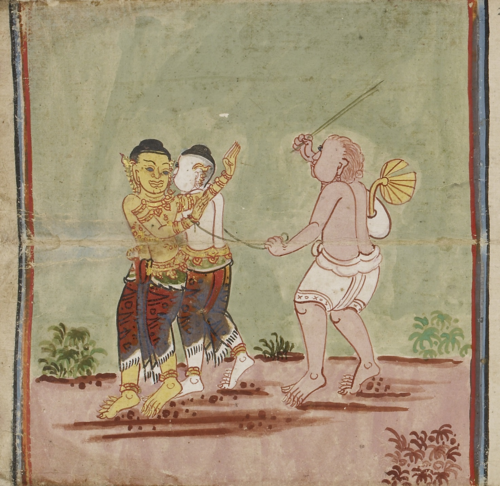 Detail from the Vessantara Jataka, which symbolises the great virtue of charity. The Brahmin Jujaka, who asked Prince Vessantara to give him his children as servants for his wife, drives the two children away violently. Remarkable in this painting is the defensive gesture of the child who is trying to protect the other sibling from being hit. In the end, through the intervention of the gods, the children are re-united with their parents and grandparents. British Library, IO Pali 207, f. 20

The text in this book was written in Khom (Khmer) script, but in the Pali language. Altogether there are thirty paired illustrations in the late Ayutthaya painting style, which make this book a rare treasure of Thai manuscript painting. The paintings are simply composed, but the artist’s command of line and form, and composition and colour, are all exemplary. The first twenty pairs of paintings illustrate the last Ten Birth Tales, and the remaining ten paired paintings depict gods and heavenly beings, including Sakka (Indra) and Brahma, as well as scenes from a Buddhist funeral.

Depictions of Brahma (left) and Sakka (right), both kneeling down in a respectful position. The gods repeatedly helped Gautama Buddha in his former incarnations that are retold in the Jatakas. British Library, IO Pali 207, f. 27

The paper of this book was made from the bark of the Khoi tree (Streblus asper), a plant in the family of mulberry trees. It is of a dull cream colour, and the writing was done with black and red China ink and a bamboo pen. Thai manuscript painters at that time had only a limited range of colours made from locally available natural materials. Red and yellow ochre, as well as white were obtained from plants and minerals (gamboges, huntite, vermilion, red lead). Black was produced from carbon (soot) or crushed charcoal. Greens and blues were mostly produced from vegetable matter (for example Indigofera) or minerals (copper, emerald, kaolin). Malachite and ultramarine were imported to produce brighter green and blue shades. Gold paint, usually a mixture of gold with lead, mercury, copper, and other minerals, was used in this manuscript to enhance the appearance of the human and heavenly figures.

This manuscript, IO Pali 207, has been fully digitised and can be viewed on the Library’s Digitised Manuscripts page by clicking here.

Posted by Annabel Gallop at 1:29 AM