Women and the Vietnam War

Surprisingly, a large number of women were directly engaged in the Vietnam War. On the American side, there is no precise figure for how many women were involved but it is estimated that between 5,000 and 11,000 took part in the war. The majority worked as nurses, whilst the rest had mostly clerical roles, or were involved in war journalism. However Vietnamese women took a much more active role in the war than their American counterparts and a good number were members of armed units and engaged in direct action against their enemy. All the images shown below are photographs of paintings which were reproduced in the journal Việt Nam, published in Hanoi in the 1960s, which is held in the British Library as SU216 (English version) and SU216(2) (Vietnamese version).

Traditionally, Vietnamese women were supposed to follow Confucian teachings. They were expected to observe chastity, to practise three submissions and obey three masters, namely their father, their husband and their eldest son. These obligations were followed by a long list of feminine ‘do’s and don’ts’. In work, they were expected to master cookery, sewing and embroidery but would not normally engage in reading and writing. In their physical appearance they were expected to dress in such a way that made them attractive to their husbands but not enticing to others ( Marr 1984: 192) – not an easy balance to strike. 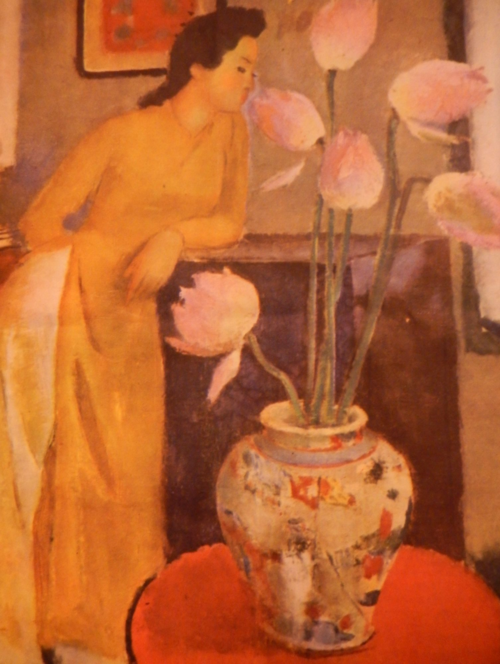 The Girl and the Lotus Flower, 1943, oil painting by Tô Ngọc Văn (1906-1954).  The artist, who trained during the French colonial period, was the director of the School of Fine Arts in Hanoi under the Vietnamese Communist Party’s regime after 1945. He subsequently trained artists during the war against the French before he was killed by the French bombing in 1954. Việt Nam, 4(43), 1961, p.[12]. British Library, SU216 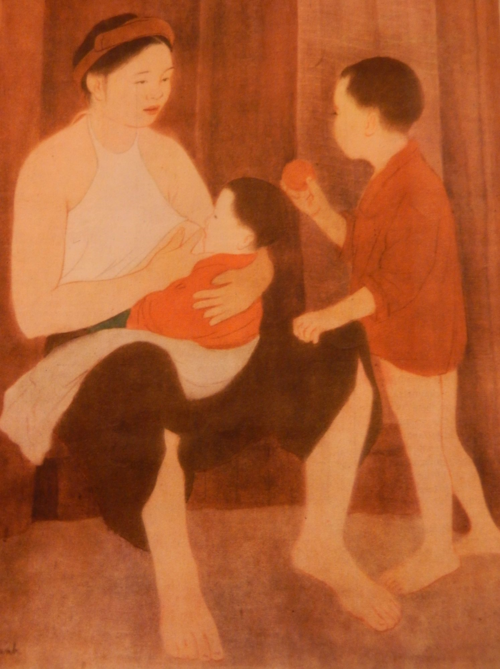 However, these traditional dogmas for women were challenged from the beginning of the twentieth century. During this period women were recognised as part of the national polity, at least in theory, and concrete proposals were made for expanding their educational opportunities (Marr 1984: 200). From the 1920s women’s organisations were formed, and debates on women’s roles - both traditional and modern aspects - were discussed in the media and in literature. While the Vietnamese struggle against French colonialism increased in the 1930s, Nhat Linh, one of the leading intelligentsia and progressives, gave a new definition of filial piety. It no longer needed to signify blind obedience to one’s elders or the self-pursuit of family interests; it was more reasoned and noble and could serve as the wellspring of patriotism. (Ho Tai 1992: 254). On the other hand, non-Marxist attitudes toward women moved even further towards the right, and they glorified the ‘Heaven-determined function’ of women within the family (Marr 1984: 233).

Caught between these controversial arguments, the efforts of the Vietnamese Communist Party to reach out to women and recruit them into its auxiliary groups continued to be hampered by women’s dual burden at home and in society (Ho Tai 1992: 253). Nevertheless, they were successful in recruiting women to join the Party. As Mary Ann Tétreault (1996: 39) points out, ‘… Vietnamese revolutionaries did more than use gender as a code through which to discuss the penetration of their society by the French. They appealed directly to women to participate in the struggle to liberate their country, promising them in return equal political, social, and economic rights and status under a new regime. These appeals attracted women who felt oppressed by the old regime….  Vietnamese women seeking equality found revolutionaries to be the only group in their society willing to commit themselves to achieving it. It is not surprising that so many responded by joining the movement.’

During the Vietnam War years, Vietnamese women had to perform both traditional and new wartime roles as required by the Party. Hô Chí Minh himself encouraged Vietnamese women to extend their roles during wartime. He encouraged and praised women in the South who fought  against the US-supported regime and the US. Meanwhile, he urged women in the North to take part in fighting against the US  in order to save the country and to build socialism (Dương Thoa 1982: 38). 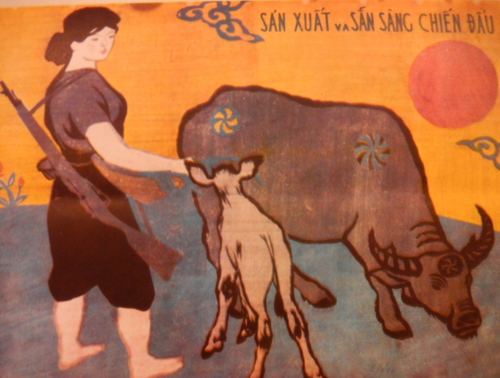 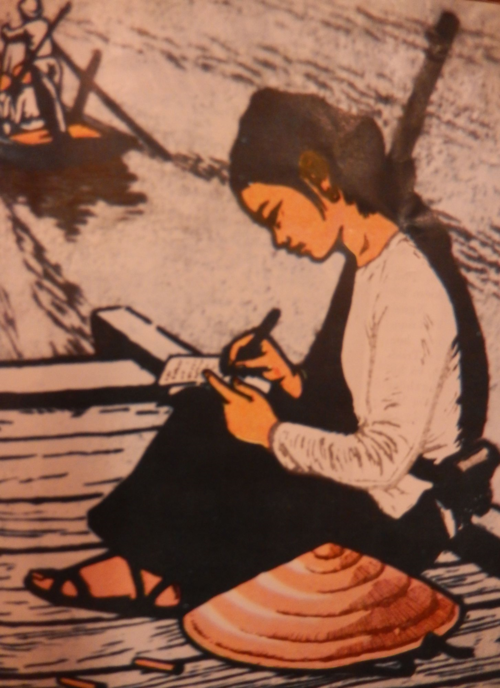 When the war was intensified after direct American involvement in the 1960s, Hanoi adopted the “three readies” policy  (ba  sẵn sàng) and asked the entire population to be ready to fight, to join the army and to go anywhere required by the Fatherland (60 years 2005: 149). Women actively took part in this policy and the “three undertakings movement” (Ba đảm đang). According to official figures, by the end of May, 1965, over 1.7 million women had signed up for the title of “Three Undertakings Woman” (60 years 2005: 151). They took up a wide range of tasks, from domestic roles to working in production in farming and in factories, in order to allow men to go to fight at the front line. They also took part in fighting as armed guerrillas or in the self-defence militia. Hô Chí Minh personally sent commendations to mothers who lost their sons in the war or made awards to women who fought the enemies. 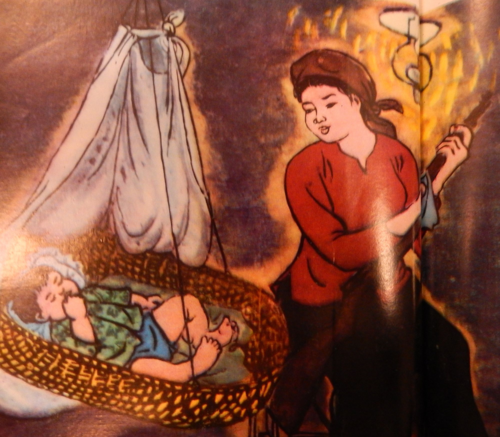 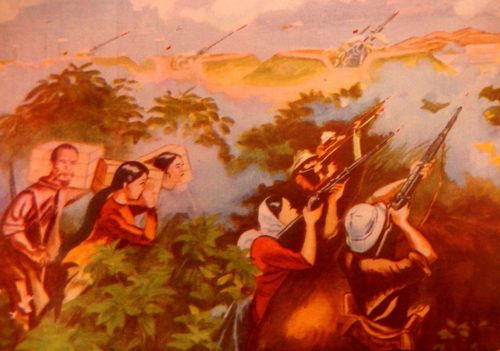 By the 1960s, Vietnamese women were shouldering a dual burden, at home and for the fatherland. They were commended by Hô Chí Minh on 20 October 1966 on the occasion of the anniversary of Women’s Association: “Vietnamese women bravely fight against the US ... from past to present, from the South to the North, from young to old, Vietnamese women are genuine heroes” (Dương Thoa 1982: 38). 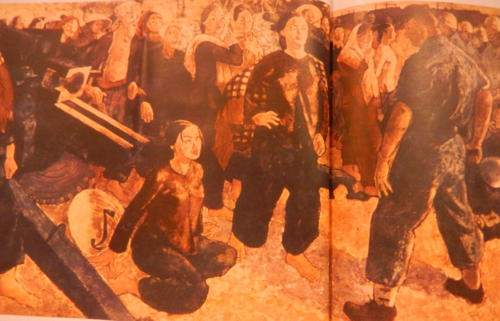 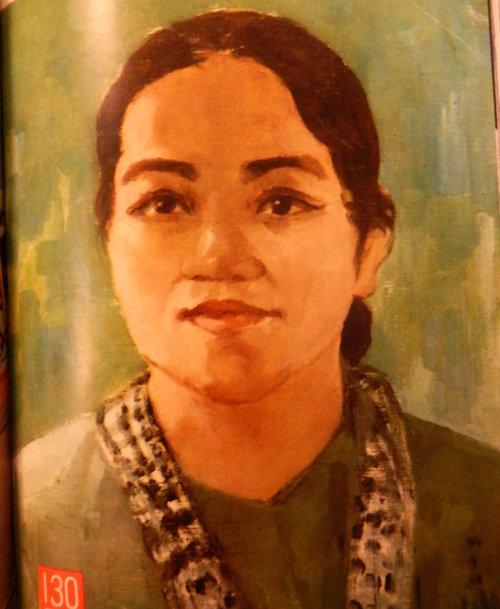 Comrade Nguyễn Thị Định (Đồng chĩ Nguyễn Thị Định) by Huỳnh Phương Đông. Nguyễn Thị Định (15 March 1920-26 August 1992) arguably epitomised Vietnamese women during the Vietnam War. She was born into a peasant family in southern Vietnam. She joined the Viet Minh and was involved in the revolutionary movement and the fight against French colonialism in the 1940s. She was a founder member of the National Liberation Front, the first female major general to serve in the Vietnam’s People Army and one of the Deputy Chairmen of the Council of State from 1987 until her death. Việt Nam, 130 (7), 1968, front cover. British Library, SU216(2)

Posted by Annabel Gallop at 7:09 AM