4,000 Arabic manuscripts by the River Niger 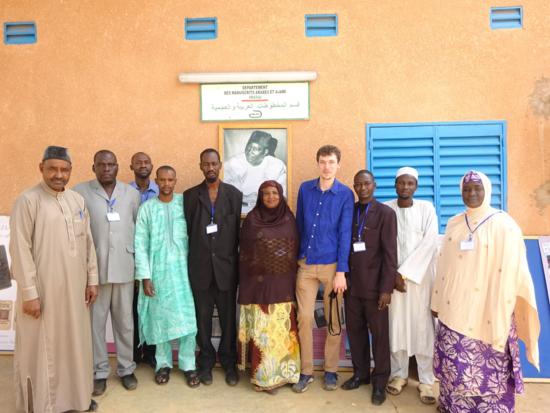 From West Africa
I am writing this piece from Niamey, Niger, where I am staying for a five-week research trip to investigate the country’s largest manuscript collection held at the Département des Manuscrits Arabes et Ajami (MARA), a department of the city’s Université Abdou Moumouni. This renowned collection contains mainly works in Arabic, but also many regional languages such as Hausa, Fulfulde, Zarma and Kanuri written in Arabic script (we call this ajami). The range of subjects covered in the collection is vast, but mainly concern works of history and religion, but I have come across works on dream interpretation, the benefits of eating kola nut and a book discussing the relative benefits and drawbacks of “associating with the French”.

At the British Library, my work is to catalogue the BL’s collection of Arabic manuscripts from West Africa as part of an AHRC Collaborative Doctoral Project with the University of Birmingham. My thesis concerns the theocratic state founded in this region in 1804 by Sheikh Uthman dan Fodio (popularly called the Sokoto Caliphate). I am especially interested how Uthman’s successors, Abdullahi dan Fodio and Muhammad Bello, set about maintaining and governing the state entity they had helped to create, as well as the legacy of the Caliphate today. 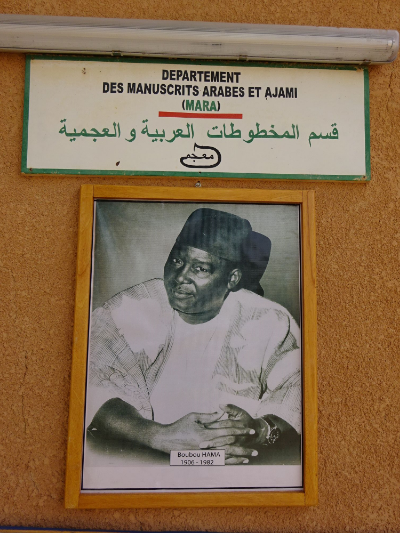 History of  MARA
The founding of MARA occurred under unusual circumstances. The story starts with Boubou Hama, one-time President of the National Assembly and also a passionate historian of the Niger region. Using his political clout to garner funds, throughout the 1960s and 70s he had been purchasing manuscripts that concerned the history of Niger from both within the country and in the wider West African region. When he could not purchase the manuscripts themselves, he paid scribes (notably in Agadez) to copy them out for him, housing his growing collection in a room in the National Assembly.

In 1974, there was an army coup in Niamey and the National Assembly was flooded with soldiers. The young rebels who discovered Boubou Hama’s manuscript collection could read neither Arabic nor their regional languages in Arabic script. They decided that these were works praising the government, which Boubou Hama had commissioned from marabouts. In their revolutionary fervour, they set about destroying the collection. It was only after an unknown quantity of these manuscripts had been destroyed that the collection was found to contain mainly historical and religious works, most of them pre-dating the Hamani government. The four hundred remaining manuscripts were transferred to the Institut de Recherche en Sciences Humaines (IRSH). The IRSH subsequently merged with the newly founded Université Abdou Moumouni and MARA was created as an official university department that same year.

Under MARA’s first directors and with help from UNESCO, the department continued to purchase and copy regional manuscripts until they possessed more than 3,000 items, for which a new storeroom was built. However, there was little effort to catalogue or preserve this rapidly expanding collection. When current director of MARA Dr. Moulaye Hassane took up his position in 1995, his priorities were to catalogue, preserve and expand the collection further. For this task, he increased the department staff to seven, including Dr. Salao Alassan, a graduate of Al-Azhar University. 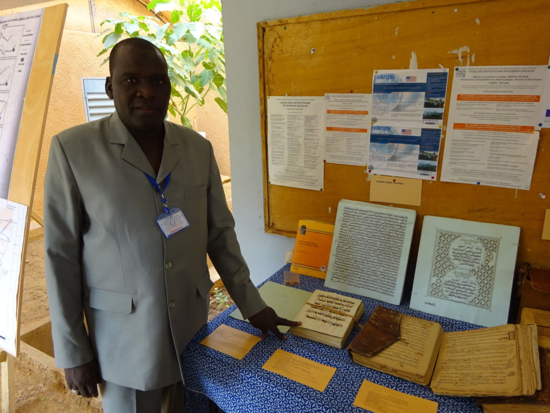 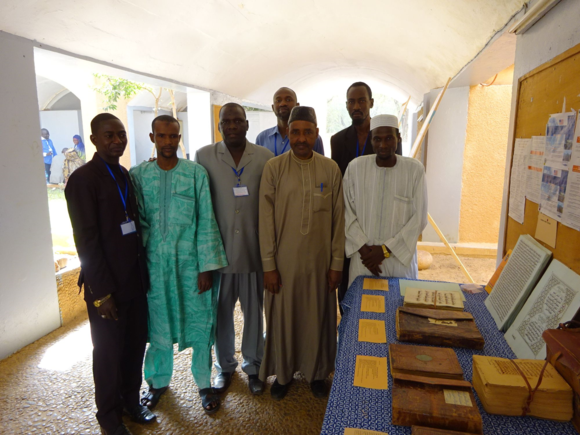 Between 2004 and 2008, they created an eight-volume catalogue containing entries for 4,000 manuscripts, an operation funded and published by the Al-Furqan Foundation. During the cataloguing process, it became apparent that there was an urgent need to undertake measures to preserve the manuscripts from damage. In 2005, the MARA acquired funding from Libya’s World Islamic Call Society to construct a new, specialised storeroom for the manuscripts. To prevent the appearance of termites –the greatest enemy of manuscripts in this part of the world- builders used traditional methods such as salting the earth and adding a saline mixture to the concrete used for the foundations. USAID also provided several dehumidifiers to control the climate of the storeroom as well as scanners, colour printers and training in digitisation techniques with the aim of safeguarding the collection permanently.

However, like many curators, Dr. Hassane is wary of digitising the entire collection, especially in Niamey where laws concerning the use of digital images are not as stringent or comprehensive as in Europe or North America. As Dr. Hassane said himself, “When I started to digitise the manuscripts, it was to safeguard them. But at the same time, I saw that it would be dangerous to digitise them because once a digital copy is made, it can be taken away. If this material becomes available, then who will come to use the archives?” 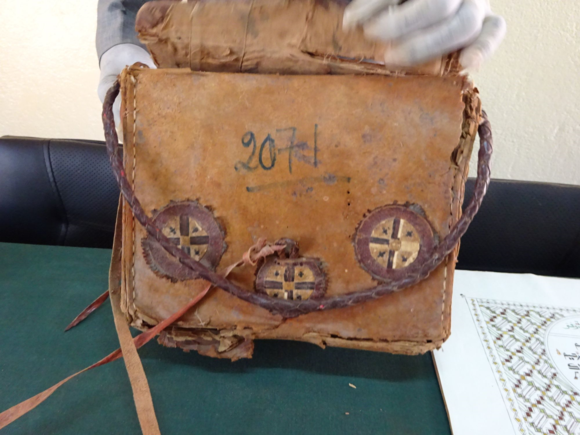 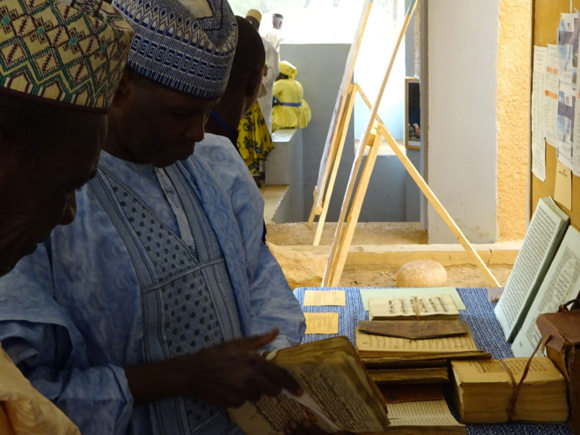 A selection of  manuscripts on display at a Colloquium held at IRSH (© IRSH, Université Abdou Moumouni)

Threats to the collection
Even after the rescuing of the initial collection from destruction in 1974, MARA’s archives have faced several threats over the years. The World Islamic Call Society has not always been so helpful to MARA. Throughout the 1980s and 90s its directors sent representatives to Niamey offering extortionate amounts of money to purchase the entire collection and move it to Tripoli. Dr. Hassane said no. “What they don’t understand”, he says, “is that if I give away the manuscript collection of MARA, what is left for me to do here?” The same could not be said for the large number of manuscripts held by private individuals all over Niger. For many of their owners, the huge financial gain was too great an opportunity and they sold their manuscripts –until that point regarded as family heirlooms- to the foundation. In 2007, during a tour of a manuscript preservation centre in Libya, Dr. Hassane saw quite a few manuscripts of Nigerien provenance. Although the manuscripts are stored safely in underground vaults, they are not likely to be studied in the near future.

MARA also recently lost its UNESCO funding. As such, MARA can no longer afford to purchase manuscripts held privately in Niger. As well as many of these private holdings being purchased by World Islamic Call Society, they are also under threat from the Izala Society, a reactionary Islamic movement that started in Nigeria. The movement’s branch in Niger has been known to purchase or demand manuscripts in order to destroy them. This is because many of these manuscripts contain the writings of Qadiri and Tijani Sufi orders, whom the movement believe to be heretical.

But maybe the biggest threat to the MARA archives is de-centralisation. Each region now envisages its own museum and archive collection. While an admirable idea, this risks the collection of MARA being split up. Already, the university-funded initiative started in 2005 by Dr. Hassane to collect and catalogue regional manuscripts held by marabouts is failing to produce results because marabouts no longer want to part with their manuscripts. In fact, many are demanding the manuscripts they sold to MARA in previous years back again. As a result, a large proportion of the manuscripts included in the projected ninth volume of the al-Furqan catalogue series will not actually be held at the MARA but will stay with their owners. Should a scholar wish to consult these items in the future, the catalogue will give the name and address of the marabout and they will have to ask for a viewing. 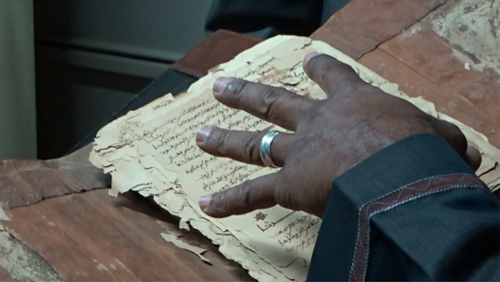 A manuscript in need of conservation (© IRSH, Université Abdou Moumouni)

Future aims, and worries
Over the coming years, Dr. Hassane and his team will continue their project to map and evaluate Niger’s private manuscript collections, which has four regions still to survey. While the project may not result in many new acquisitions, they are still creating a fantastic resource. The team will collect the name of each marabout, their religious affiliation, education and current teaching activity, as well as a photograph of them with their prized manuscripts. There is also an initiative to translate and publish critical editions of as many as the manuscripts as possible. For this task, Dr. Hassane wants to involve post-graduate students from Université Abdou Moumouni writing theses in history or Islamic studies. 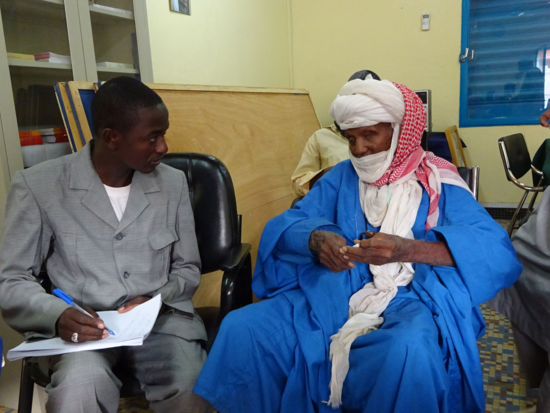 My time here with the manuscripts has so far been fruitful and rewarding. My temporary colleagues have become more like my friends, and after a day’s work with the manuscripts we indulge in fried fish caught in the River Niger, some 100 metres down the road -although this may make some BL staff rather nervous, as the manuscripts are still lying around as we eat! Plus, as the initiative to survey and evaluate Niger’s privately-held manuscripts continues, there is a regular stream of wise old marabouts turning up at MARA offices to share their knowledge and donate copies of their works.

It is often difficult for Nigerien academics to get their work published in mainstream academic journals (not least because they are restricted to the Francophone world) and Dr. Hassane’s fears about the collection being digitised and distributed amongst Western academics and the trickle of foreign visitors to the collection drying out is completely understandable. MARA is neither short of human resources, nor short of material to work on. However, it does not have the financial resources or the international presence of –say- the Timbuktu manuscripts, mainly because the threats to this collection are not as visible (and media-friendly) as an Islamist insurgency. Often held up as an achievement for global cultural heritage, Dr. Hassane in fact wants to avoid the Timbuktu model, where private archive collections lobby for sponsorship by powerful external donors and monetise access to the manuscripts, making collaborations almost impossible. “I am an academic,” says Dr. Hassane, “I don’t do business with manuscripts.” 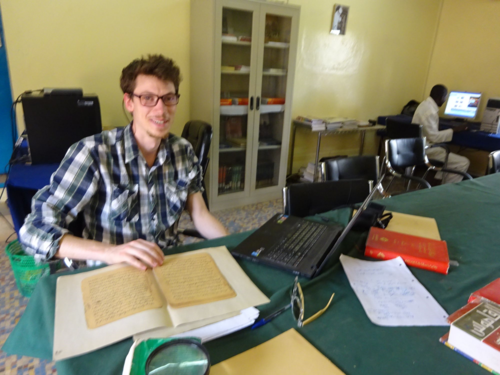