From Samarkand to Batavia: a popular Islamic catechism in Malay

On a recent visit to Indonesia, I was informed by Professor Oman Fathurahman of the State Islamic University of Syarif Hidayatullah, Jakarta, of plans to set up a ‘Museum Islam Betawi’, which would explore aspects of the practice of Islam in Batavia, the old Dutch name for Jakarta. We discussed what might be exhibited in such a museum, and the first thing that came to mind was Islamic manuscripts written in Batavia, representative of the texts that were taught and studied in the locality, and which shaped beliefs and daily life. 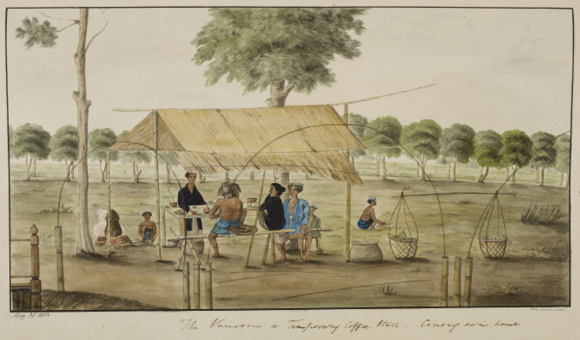 A warung, or small coffee-stall, in Gunung Sari, Batavia, very close to Salemba, where the manuscript discussed below was copied. Watercolour by John Newman, 1813. British Library, WD 953, f.82 (93).

Among the Malay manuscripts in the British Library which have recently been digitised there is only one which was definitely written in Batavia, but it is probably an excellent example of the type of work used for Islamic instruction in the city. It is a copy of Bayān ‘Aqīdah al-Uṣūl, ‘Elucidation of the fundamentals of faith’, also known as Masa‘il, ‘Questions’, a simple catechism written in question-and-answer form by Abū al-Layth Muḥammad b. Abī Naṣr b. Ibrāhīm al-Samarqandī (d. 983), a jurist of the Hanafi school of law from the ancient city of Samarkand, located in present-day Uzbekistan. What was originally a single manuscript has now been separated into two parts, one consisting of the Arabic catechism of al-Samarqandī with interlinear translation into Malay (IO Islamic 2906), and a second volume (MSS Malay C.7) containing texts wholly in Malay.  The Malay volume starts with a catechism on prayer (sembahyang) also in question-and-answer form, and is followed by instructions on prayers for the dead (Ini niat sembahyangkan mayat laki-laki) and a text on marriage (Inilah kitab pada menyatakan hukum nikah), which is left incomplete as the manuscript ends abruptly. 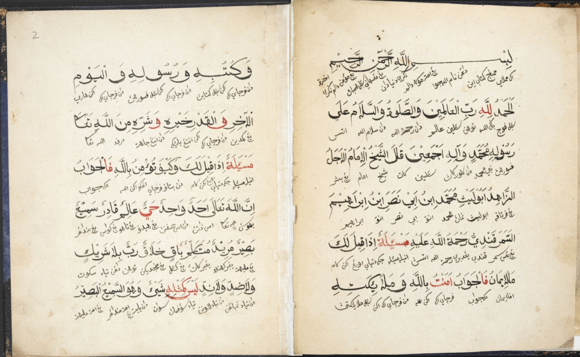 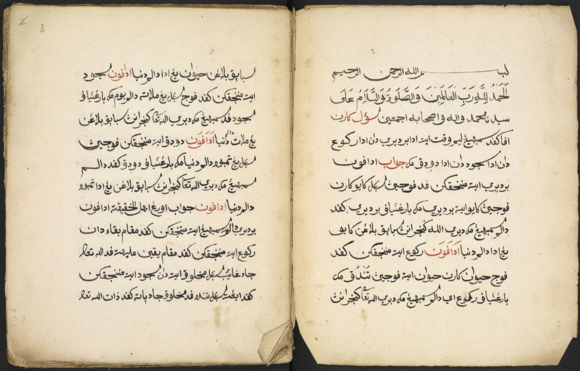 Both parts are written in the same hand, and a note on the cover, now housed with the Malay volume, identifies the scribe. The owner of the manuscript is named as Mister Alperes of Kampung Salemba in Batavia, and the scribe introduces himself as Duljabar, who had come to Batavia from Cirebon. With conventional modesty he apologises for his poor handwriting “like chickens’ scratchings” (cakar hayam); in fact, as can be seen, his hand is quite stylish, with sophisticated layerings of certain letters, such as in the initial word alamat. Although the manuscript is undated it was most likely acquired during the British administration of Java (1811-1816) and therefore probably dates from the early 19th century.

Note by the scribe of the manuscript: ‘This is the book of Samarqandi, belonging to Mister Alperes, who lives in Kampung Salembah. This book was written by Master Duljabar, from Cirebon, who came to Batavia when he was very young, and who learnt to write from Mister Alperes. I was set to write all sorts of things and I wrote them to the very best of my ability, fearful of being accused of refusing or being lazy; and so this is the result, but my humble apologies are offered to those gentlemen who will read it, because the writing looks like it was scratched by chickens’, Alamat surat kitab Samarqandi Tuan Alperes yang empunya dia yang telah duduk dalam daerah Kampung Salembah adanya. Dan yang menyurat kitab ini Enci' Du al-Jabar anak Cerebon, kecil ia datang di Betawi baharu belajar menyurat daripada Tuan Alperes menyurat apakan dia dengan seboleh2 hamba suratkan takut hamba dikatakan tiada mau serta malas inilah akan rupanya melainkan maaf jua perbanyak2 kepada tuan2 yang membaca dia karena suratannya bagai dicakar hayam demikian adanya. British Library, MSS Malay C.7, f.1r

Michael Laffan (2011: 33) has noted that by the mid-19th century the catechism of al-Samarqandī was one of the two most popular Islamic texts throughout Indonesia, the other being Sifat Dua Puluh, ‘Twenty Attributes’ of God, derived from the ‘Umm al-Barāhīn of al-Sanūsī (d.1490), which also featured in a recent blog. Al-Samarqandī ’s work seems to have been particularly well-regarded in Java, and the British Library holds three copies of parts of the text with Javanese translations (MSS Jav 43, MSS Jav 77 and Or. 16678). Another manuscript in Arabic with Javanese translation is found in Cambridge University Library (Or. 194) while the Royal Asiatic Society holds a full translation into Javanese (Raffles Java 22). In Leiden University Library, of the 14 Arabic manuscripts of Bayān ‘Aqīdah al-Uṣūl, 13 have an interlinear translation in Javanese, while one has a Makassarese translation (Voorhoeve 1980: 45). The Endangered Archives Programme has also documented four manuscripts of the work with Javanese translations, two held at an Islamic boarding school in East Java, the Pondok Pesantren Tegalsari in Jetis, Ponorogo, and two in Cirebon on the north coast of west Java: one in the royal collection of Sultan Abdul Gani Natadiningrat  and another held by Muhammad Hilman. It is thus interesting to note that Duljabar's manuscript copied in Batavia is relatively rare in presenting al-Samarqandī's Bayān ‘Aqīdah al-Uṣūl with a Malay translation. 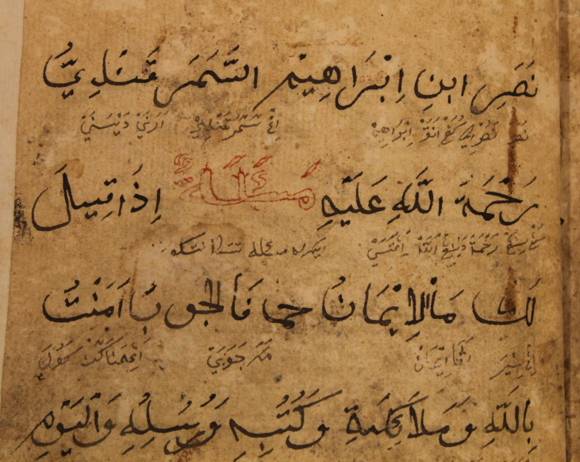 The start of al-Samarqandī's catechism, in Arabic with small interlinear Javanese translation, and with the beginning of each question highlighted in red, late 18th century, from the collection of Colin Mackenzie. British Library, MSS Jav 43, f.89v 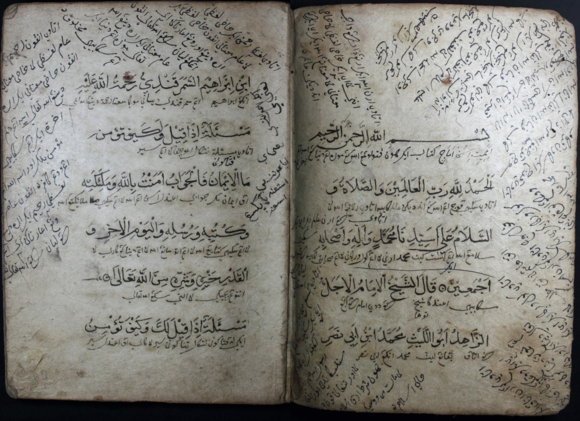 Posted by Annabel Gallop at 1:44 AM