One of our most important Mughal manuscripts is Or.12076, the Razmnāmah (ʻBook of Warʼ), copied in AH 1007 (1598/99) and containing the concluding part, sections 14-18, of the Persian translation of the Sanskrit epic the Mahābhārata. It is currently on display at the Asian Art Museum, San Francisco, in the exhibition Pearls on a String: Artists, Patrons, and Poets at the Great Islamic Courts curated by Amy S. Landau of the Walters Art Museum Baltimore where it was originally exhibited. As a result of the Library's participation in the exhibition the whole volume has now been digitised and is available online for everyone to look at — whether they are lucky enough to be able to visit the exhibition or not! 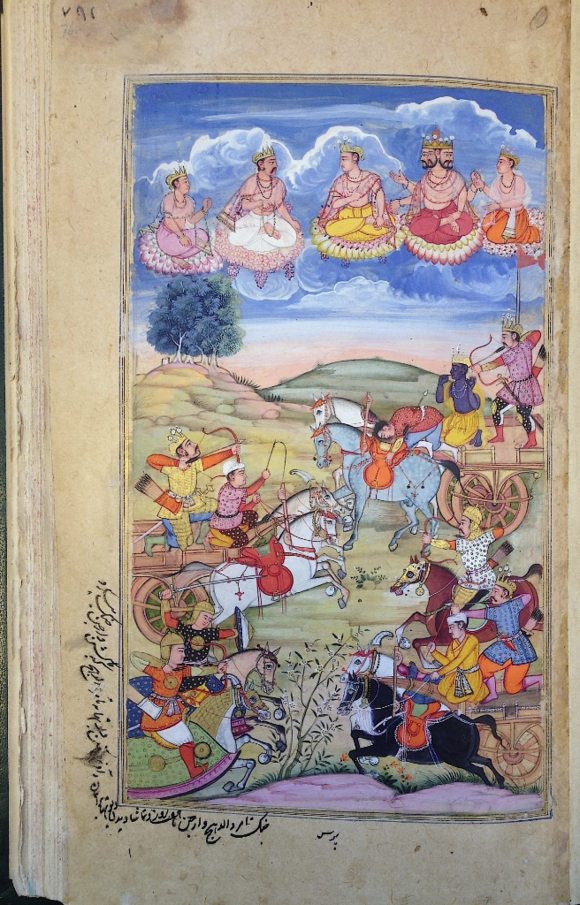 While Arjuna and Tāmradhvaja fight against each other for seven days, the gods enjoy the spectacle (tamāshā), watching safely from the sky. Episode from the 14th book, the Aśvamedhikaparva (ʻhorse sacrificeʼ). Painting attributed to Paras (Or.12076, f.76r)

Commissioned in 1582 by the Emperor Akbar, the Persian Razmnāmah is a prose translation of all 18 books of the Sanskrit Mahābhārata in addition to the Harivaṃśa appendix. It is not a literal translation though the content is relatively unchanged. For those interested in the storyline, a detailed summary of the Persian version is given by T.H. Henley in his preface to Memorials of the Jeypore Exhibition, 1883. vol. 4: The Razm Námah (London, 1885).

The reasons for its composition, as outlined in Abū ʼl-Faz̤l's preface of 1587, were primarily to make the stories and ideologies of the Mahābhārata more accessible. At the same time it invited both Muslims and Hindus to question some of their traditional beliefs while, of course, simultaneously glorifying Akbar's role as the perfect ruler (Cosmopolitan encounters, pp. 227-238). 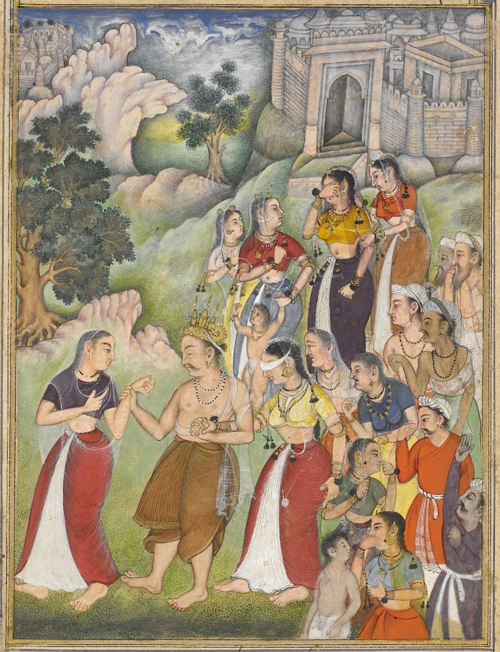 The blind king Dhṛtarāṣṭra, led by Kuntī, leaves the city of Hastinapur and retires to the forest. His wife Gāndhārī, blindfolded, supports him following behind. From the 15th book, the Aśramavāsikaparva (ʻRetirement to the Hermitageʼ). Painting attributed to Dhanū (Or.12076, f.110v)

The logistics of how the Mahabhārata was translated are described in the contemporary author Badāʼūnī's Muntakhab al-tavārīkh who writes somewhat disparagingly (M. Athar Ali's translation, p. 40):

Collecting together the learned men of India, His Majesty directed that the book Mahabharat should be translated. For some nights His Majesty personally (had it) explained to Naqib Khan, who wrote out the resultant text in Persian. On the third night His Majesty summoned me and ordered me to translate it in collaboration with Naqib Khan. In three or four months out of the eighteen chapters (fan) of that stock of useless fables... I wrote out two chapters. ... Thereafter Mulla Shiri and Naqib Khan completed that section, and one section Sultan Haji Thanesari ʻMunfaridʼ brought to completion. Shaikh Faizi was then appointed to write it in verse and prose, but he too did not complete more than two Chapters (fan). Again, the said Haji wrote out two sections and rectified the errors which were committed in the first round, and fitting one part with another, compiled a hundred fasciculi. The direction was to establish exactitude in a minute manner so that nothing of the original should be lost. In the end upon some fault, His Majesty ordered him (Haji Thanesari) to be dismissed and sent away to Bhakkar, his native city, where he still is. Most of the interpreters and translators are in hell along with Korus and Pandavs, and as for the remaining ones, may God save them, and mercifully destine them to repent.... His Majesty named the work Razmnaama (Epic), and had it illustrated and transcribed in many copies, and the nobles too were ordered to have it transcribed by way of obtaining blessings. Shaikh Abul Fazl... wrote a preface of the length of two quires (juzv) for that work.[1]

Equally important are details preserved at the end of the translation itself. As can be seen below, our manuscript, Or.12076, is partially damaged but fortunately the crucial passage is preserved in several other copies (Truschke’s translation, Cosmopolitan encounters, p.187 - the names have been Sanskritised):

Naqīb Khān, son of ʻAbd al-Laṭīf Ḥusaynī, translated [this work] from Sanskrit into Persian in one and a half years. Several of the learned Brahmans, such as Deva Miśra, Śatāvadhāna, Madhusūdana Miśra, Caturbhuja and Shaykh Bhāvan…read this book and explained it in hindī  to me, a poor wretched man, who wrote it in Persian. 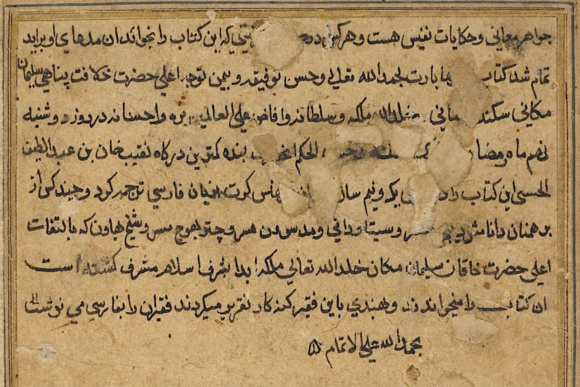 This process is also confirmed in an illustration (Lewis M18) preserved in the Free Library of Philadelphia (one of 25 leaves from the now dispersed earlier part of the same manuscript) which shows the two groups of linguists, Muslim and Hindu, translating and discussing together (Pearls on a String, p. 146).

Or.12076 consists of 138 leaves which are numbered continuously in an earlier foliation which begins at 715. There are several leaves missing, but the last numbered leaf is folio 131 which is numbered 846 suggesting that our volume represents the last of a possible six volumes altogether. It was purchased by the British Museum on 11 December 1954 from the dealer A. Garabed who had himself bought it at Sotheby's a few weeks earlier (Lot 230, Sotheby's sale 8 Nov. 1954). It is not known who owned it immediately before that but we do know that it had previously been sold anonymously at Sotheby’s in London in 1921. The Library's annotated copy of the 1921 Sotheby sale catalogue (S.C.Sotheby(1), 24-25 Oct. 1921, lot 203) has not to my knowledge been studied before, but shows that it was purchased for £76 by the British collector and art historian Gerald Reitlinger (1900-1978). 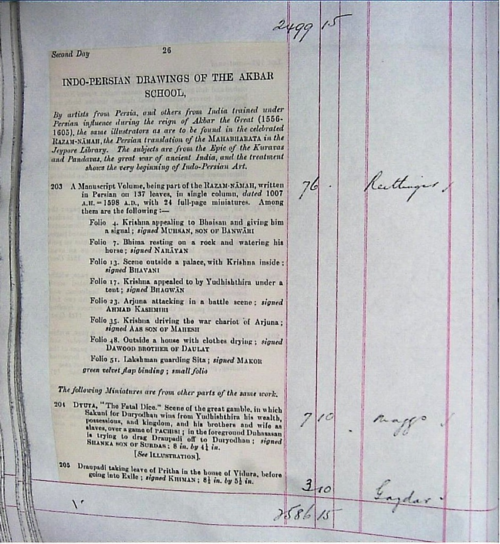 The original manuscript had already been divided up when it was sold in 1921. In addition to our volume, lots 204 to 278 included 125 separate paintings from the same work. These are now in museums and libraries all over the world. In an appendix to his article on three illustrated copies of the Razmnāmah (Model and Copy, pp. 56-62), John Seyller lists the locations of 161 identified illustrations. The attached descriptions with the buyers' names in our annotated copy may provide further details on some of them. Sadly, we'll probably never know what happened to lot 279  “the remaining portions of the work, loose leave, incomplete,” sold to Gazdar (presumably the art dealer  J. Gazdar) for £1. Several leaves were purchased by the Persian scholar C.A. Storey. These are now in the library of the Royal Asiatic Society, London. A further 8 individual leaves were acquired subsequently by the India Office Library from Maggs (British Library Add.Or. 2776-2783).

The artists of the 1598 Razmnāmah 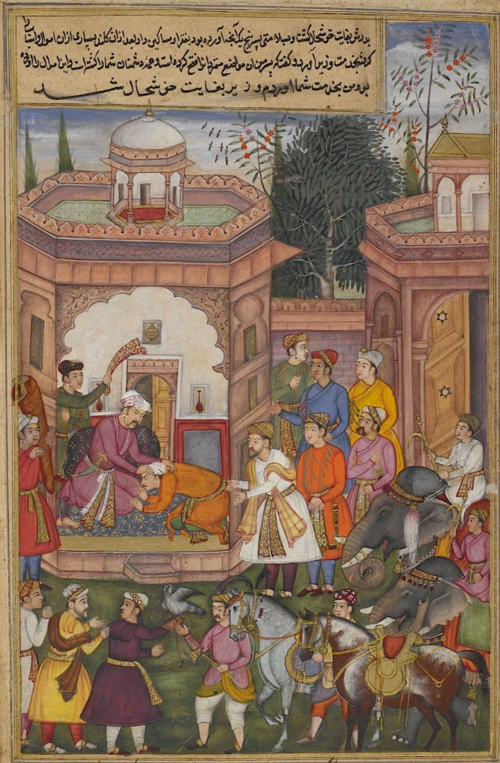 Candrahāsa kneeling before the Raja of Kuntala on being presented to him by the minister Dhṛṣṭabuddhi after Candrahāsa’s victory over the king’s enemies. The elephants, horses and hawk are booty from the enemy. Episode from the 14th book, the Aśvamedhikaparva (ʻhorse sacrificeʼ). Painting attributed to Kanhar (Or.12076, f.83v)

Our manuscript contains 24 illustrations which are all attributed beneath the paintings to individually named artists. The fact that several of them also contributed to known imperial manuscripts suggests that it was completed at court, no doubt one of the many copies transcribed by order of Akbar which Badāʼūnī mentions in the passage quoted above.

Table based on Meredith-Owens and R. H. Pinder-Wilson (“A Persian translation ...”, p. 65) giving a list of artists of the Razmnāmah showing which ones also worked on the Mughal Bāburnāmah and Dārābnāmah (follow the hyperlinks to go directly to the digitised images) 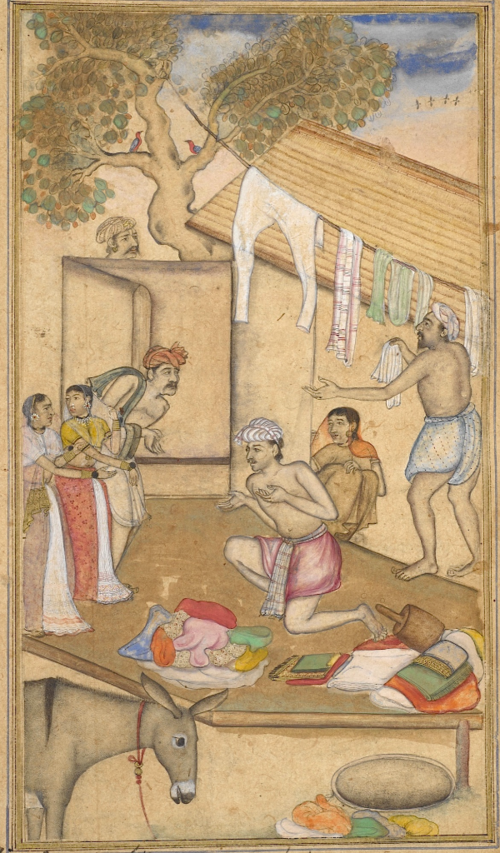 One of  Rama's servants overhears a washerman quarrelling with his wife. Episode from the 14th book, the Aśvamedhikaparva (ʻhorse sacrificeʼ). Painting attributed to Daʼūd, brother of Daulat (Or.12076, f.48r) 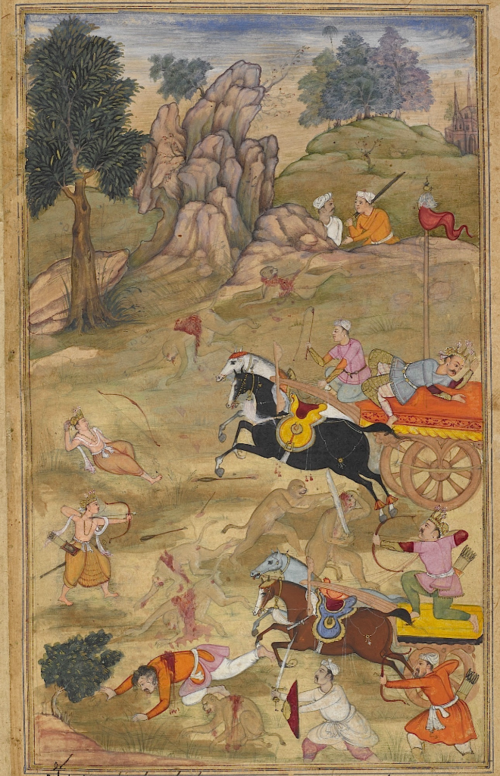 Kusa and Lava defeating Bharata, Lakshmana and the monkey army. European-type Gothic spires are visible on the skyline. Episode from the 14th book, the Aśvamedhikaparva (ʻhorse sacrificeʼ). Painting attributed to Ās, son of Mahesh (Or.12076, f.62v)

Pearls on a String: Artists, Patrons, and Poets at the Great Islamic Courts is on view at the Asian Art Museum, San Francisco until May 8th. A catalogue with the same title is available which includes details of all the exhibits in addition to several lengthy contributions by scholars in the field.

Amy S. Landau,  Pearls on a String: Artists, Patrons, and Poets at the Great Islamic Courts (Baltimore, 2015),  especially Adamjee and Truschke's chapter “Reimagining the ʻIdol Temple of Hindustanʼ,” pp. 141-65
Audrey  Truschke, Culture of Encounters: Sanskrit at the Mughal Court (Columbia University Press, 2016). Unfortunately at the time of writing I haven't yet had access to this newly published work but have referred instead to her PhD thesis: Cosmopolitan Encounters: Sanskrit and Persian at the Mughal Court  (Columbia University Academic Commons, 2012)
Yael Rice, “A Persian Mahabharata: The 1598-1599 Razmnama,” Manoa 22/1 (2010): 125-131
John Seyller, “Model and Copy: The Illustration of Three Razmnāma Manuscripts,” Archives of Asian Art 38 (1985): 37-66
J. P.Losty and Malini Roy, Mughal India: Art, Culture and Empire (British Library, 2012), pp. 55-8
G. Meredith-Owens and R. H. Pinder-Wilson,“A Persian translation of the ‘Mahabharata’, with a Note on the Miniatures,” The British Museum Quarterly, 20/3 (1956): 62-65
M. Athar Ali, “Translations of Sanskrit Works at Akbar's Court,” Social Scientist 20, no 9/10 (1992): 38-45

Posted by Ursula Sims-Williams at 5:33 PM