The British Library’s oldest Qur’ān manuscript, Or.2165, dating from the eighth century, has now been fully digitised and is available on the British Library's Digitised Manuscripts site. Among the most ancient copies of the Qurʼān, it comprises 121 folios containing over two-thirds of the complete text and is one of the largest of known fragments of an early Qurʼān written in the māʼil script. 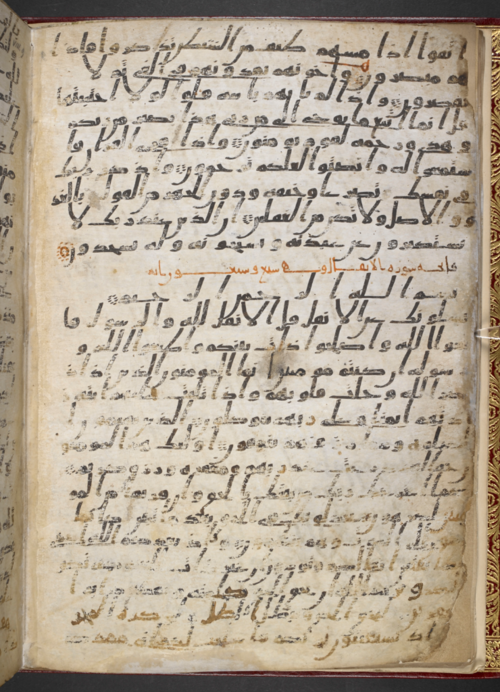 The end of Sūrah 7 (Sūrat al-A‘rāf, ‘The Heights’) and the beginning of Sūrah 8 (Sūrat al-Anfāl, ‘The Spoils of War’). The heading in red ink gives the title of the Sūrah and says that it contains 77 verses (British Library Or.2165, folio 7v)

This manuscript was purchased by the British Museum in 1879 from the Reverend Greville John Chester (1830-1892) as noted on a fly leaf at the back of the manuscript. Chester was an ordained clergyman interested in archaeology, Egyptology and natural history and made numerous trips to Egypt and the Near East, where he acquired objects and manuscripts, which are now in the collections of major UK cultural and library institutions. It is very likely he acquired this Qur’ān when he was in Egypt.

Acquisition details recorded at the end of the manuscript (British Library Or.2165, endpaper)

The earliest Qur’ān manuscripts were produced in the mid-to-late seventh century, and ancient copies from this period have not survived intact and exist only in fragments. Or.2165 contains three series of consecutive leaves (Sūrah 7:40 – Sūrah 9:96; Sūrah 10:9 – Sūrah 39:48; Sūrah 40:63 – Sūrah 43:71) from the so-called mā’il Qur’ān, which is about two-thirds of the Qur’ān text and is one of the oldest Qur’āns in the world. It probably dates from the eighth century, and as far as can be ascertained, was produced in the Hijaz region of the Arabian Peninsula.

The Arabic word mā’il (by which this Qur’ān is known) means ‘sloping’ and refers to the sloping style of the script – one of a number of early Arabic scripts collectively named ‘Hijazi’ after the region in which they were developed. The main characteristic of mā’il is its pronounced slant to the right. It can also be recognised by the distinctive traits of some of its letters, for example, the letter alif does not curve at the bottom but is rigid, and the letter yā’, occurring at the end of a word, turns and extends backwards frequently underlying the preceding words.

In early Qur’āns there are no vowel signs, and this early style of script is also notable for its lack of diacritical marks to distinguish between letters of similar shape. Verse numbering had also not yet been established; the end of each verse was indicated by six small dashes in two stacks of three. The sūrah headings were added much later in red ink in the recognisable space purposely left blank to distinguish between the end and the beginning of chapters. Red circles surrounded by red dots to mark the end of every ten verses were also added later. 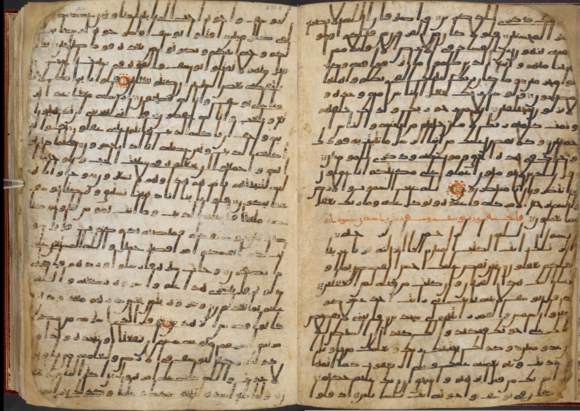 The beginning of Sūrah 12 (Sūrat Yūsuf, ‘Joseph’) showing the verse markers and also the red headings and circles which were added later (British Library Or.2165, folios 23v-24r)

As with all early Qur’āns, the text is written on vellum and would have been bound into a codex or muṣḥaf – originally a collection of sheets of vellum placed between two boards. Each double sheet was folded into two leaves, which were assembled into gatherings then sewn together and bound as quires into a codex.

The importance of Or.2165, in addition to all other known early Qur’ān fragments, cannot be overestimated. They provide the only available evidence for the early development of the written recording of the Qur’ān text and help towards our understanding of how early Qur’ān codices were produced.