The work of our Collection Care team is going to feature on a new major television series airing on BBC Four. King Alfred and the Anglo-Saxons will examine the careers of King Alfred the Great, the Lady Æthelflæd and King Athelstan in a three part series starting on Tuesday, 6 August (21:00-22:00). Some of the archival material consulted for the series is from the burnt Cotton collection and was severely damaged by fire in the 18th century at Ashburnham House. Our conservators, scientists and curators will be featured handling and caring for the vulnerable material in all three episodes, while being interviewed by presenter and historian Michael Woods. The extraordinary tale of King Alfred is almost surpassed by the fascinating history of the ill-fated Cotton manuscripts. 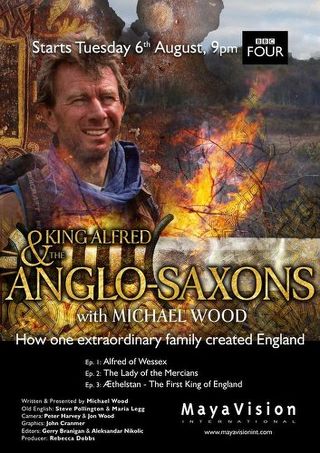 Two of the manuscripts consulted during filming were Cotton MS Otho B. IX, a late 9th- or early 10th-century gospel book which came into the possession of King Athelstan, and Cotton MS Otho A. VI, the only surviving copy of Alfred the Great’s Old English prose and verse translation of Boethius’s Consolation of Philosophy. The Cotton collection refers to the library assembled by Sir Robert Cotton (1571-1631) which was presented to the British nation by his Grandson Sir John Cotton around 1700. It contains some of the most well-known treasures of the British Library including the Lindisfarne Gospels (Cotton MS Nero D. IV), Magna Carta: Exemplification of 1215 (Cotton MS Augustus II. 106) and Beowulf (Cotton MS Vitellius A. XV). Manuscripts were originally housed by Sir Robert Cotton in large presses surmounted by busts of the Twelve Caesars and two Imperial Ladies, and labelled according to their position (for example Cotton Otho A. VI was under the bust of Otho, top shelf (A), and six over). This arrangement has been incorporated into modern shelfmarks at the British Library. It was described as ‘the most important collection of manuscripts ever assembled in Britain by a private individual.’ Suddenly, the unthinkable occurred.

A fire breaks out

On 23 October 1731 a great fire broke out where the Cotton manuscripts were being temporarily held at Ashburnham House, Westminster. About a quarter of the collection was affected. The librarian at Ashburnham House Dr Bentley is recorded to have leapt from a window to escape the fire with the 5th-century Codex Alexandrinus (MS Royal 1. D. V-VIII; one of three of the earliest manuscripts of the Bible) under one arm. Thanks to Bentley’s agility you can today view the manuscript online in its fireproof digitised form. The fire consumed almost the entire printed book collection and some of the manuscripts. Although only 13 entire manuscripts perished, there was significant damage to many which lost important articles or remained only as charred fragments. 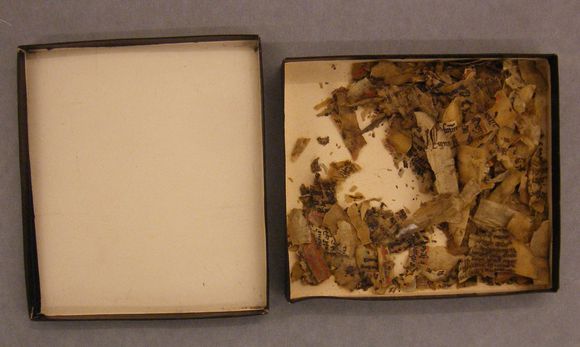 A box of charred fragments collected from the Ashburnham House fire in 1731. The many cinder-like fragments and burnt lumps of parchment were bundled into drawers and flimsy boxes later causing much confusion as to their origin

The damage was utterly devastating. A black edge bead had formed on the manuscript edges, most often consisting of a brownish congealed gelatine and carbon particulates. Gelatine is the end product of the sudden degradation of the parchment collagen and occurs when the long fibres under tension break apart. When cooled the parchment became very brittle and any subsequent handling resulted in serious textual loss. The heat not only damaged the text but left vulnerable wax seals as melted shapeless globules bereft of their intricate design. 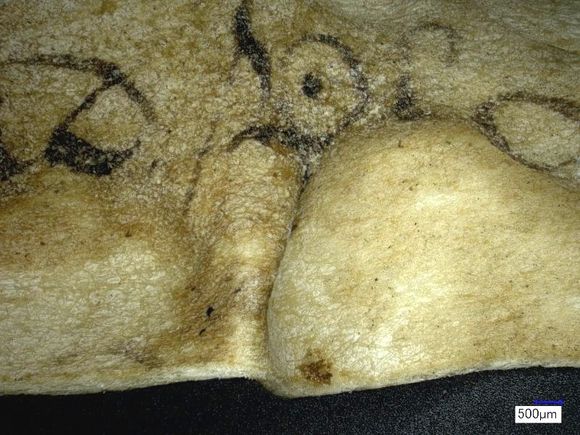 A fragment of warped parchment from the burnt Cotton collection at 20x magnification. The iron gall ink follows the path of the parchment making it difficult to read

As is often the case in fires, much of the damage was caused by the water used to extinguish the flames. Damp parchment and paper manuscripts were at risk of developing mould and urgently required drying.

A renewed effort at restoration

The Cotton collection made its way to the British Museum in 1753, but it wasn’t until 1837 when Sir Frederic Madden was appointed Keeper of Manuscripts that further work was done. The burnt manuscripts were divided into classes depending on the severity of the damage, and a plan was put in place for their restoration. Expertise was sought from Henry Gough who had undertaken repair work of damaged manuscripts in the Bodleian and other College Libraries in Oxford. Solutions of ethanol and water were reported to have been used to soften the manuscripts in order to wash individual leaves. Tiny incisions were made between the columns and the lines of writing to allow room for expansion of the most shrivelled part of parchment contracted by the flames. Many of the Cotton manuscripts thought to have been lost were identified, flattened, inlaid, collated and bound. 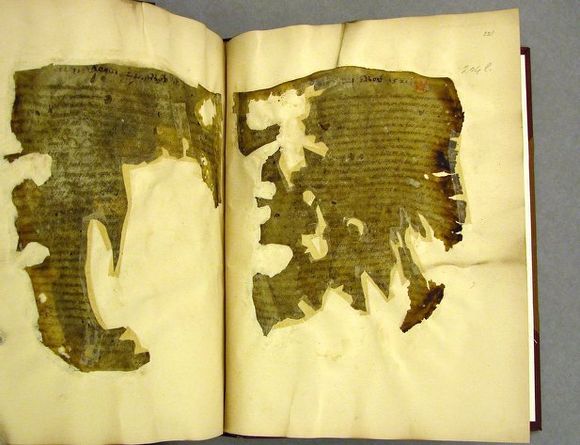 The inlaid leaves of Cotton MS Vitellius B. IV. Since the parchment is sensitive to humidity changes it can pull on the paper frame causing cockling 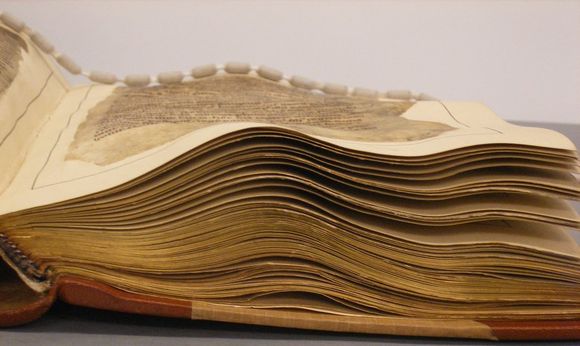 The remaining loose fragments were flattened, some identified and most of those inlaid. Inlays were made by tracing out the shape of the parchment leaves on construction paper. These pencil marks are still visible and you may have noticed them on some of our Digitised Manuscripts. The centre of the construction paper was cut out a few millimetres inside the pencil lines to leave a frame. Paste was applied behind the frame and the loose leaf was then secured in place, sometimes obscuring regions of writing. The paste often left stains that later became brittle. 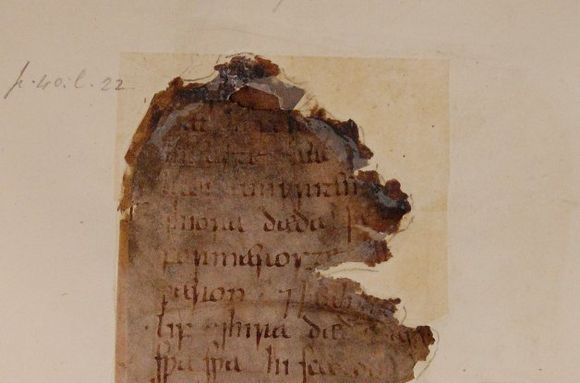 Cotton MS Otho A. VI folio 32r. Incisions between lines of writing are observed on the right hand side of the parchment to allow for expansion. Pencil lines are visible around the edges where the inlay was traced and cut out. The cockled centre and shrunken edges reflect a temperature gradient across the original book block, which remained cooler nearer the centre

The entire process was complete in 1856. Although the inlaying has been much criticised it provided much-needed protection against handling as some of the leaves had a tendency to erode. Many more fragments may have been entirely lost had they not been treated at all.

On 10 July 1865 Madden received some horrifying news: another fire had broken out and the manuscripts were again in jeopardy. He was horrified. A charcoal brazier in the finishing room at the bindery had caused the blaze resulting in severe damage to the manuscripts that had been left out to work on. Fortunately, the majority of the manuscripts were locked away in an iron safe, but it was little consolation for Madden’s tireless efforts. Madden kept a detailed record of his work as Keeper which is today held in the British Library. A late 9th-century copy of King Alfred’s Old English translation of Gregory the Great’s Pastoral Care (Cotton MS Tiberius B. XI) was lost and according to Madden’s records: “…it lay on a board immediately above the bin of charcoal, and a slate slab was placed above it. The slate flew into fragments from the heat, and the MS. (a good thick folio written on vellum, bound in russia) must have fallen into the midst of the burning charcoal.”

Madden retired in 1866 somewhat bitter about the lack of recognition he received for his conservation efforts. Much of the documentation regarding his work was unknown to the public until 1981 when they were incorporated from the Departmental Archives into the Additional Manuscripts. The story of the Cotton manuscripts is a fascinating one and you can read more detail in this essay by Andrew Prescott.

Cared for at the BL

More than 1,400 manuscripts and over 1,500 charters and seals comprise the Cotton collection at the British Library ranging in date from the 4th – 17th centuries. Madden would be pleased to know that we now have low-oxygen storage facilities to prevent any more fires from breaking out! Collection Care is using new imaging technologies such as multispectral imaging to recover lost information and protect these valuable fragments from misuse. Much work has recently been carried out on the burnt Cotton collections by our parchment specialist Mariluz Beltran de Guevara. Even now more fragments are being identified. For more examples of burnt material at the British library read our Conservation Officer Ann Tomalak’s post in the Medieval Manuscript’s blog.

Tune in to BBC Four this month to see the manuscripts in action. Understanding the history of our collections is crucial for understanding the care required to treat them.

Posted by Christina Duffy at 10:27 AM