Did you know that conservators often wash paper?

When paper is badly degraded, and especially when there has been mould damage as with the document below, it often needs to be washed. Washing paper helps to remove acidic degradation products and reforms the hydrogen bonds in the paper structure, making it stronger. 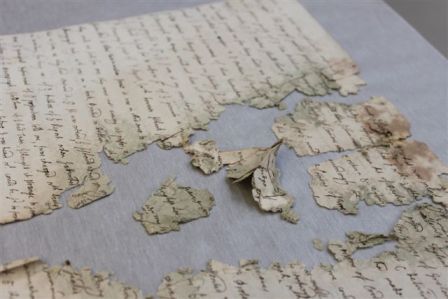 Fig 1: Additional MS 70282. Prior to its acquisition by the British Museum this manuscript was water damaged and became mouldy. Although the mould spores are no longer active, the damage remains. The mould has eaten away at the paper, making the fibres soft and fragile. This manuscript is written using iron gall ink, which presents its own unique problems for the conservator.

Iron gall ink was the primary ink used in Europe from the middle-ages right into the 19th and even 20th centuries. It was often homemade and there is a huge variation in recipe, but its principal ingredients are tannins (usually extracted from oak galls), iron sulphate (also known as vitriol), and water. The different recipes result in inks with different levels of chemical stability, but in most cases there will be an excess of sulphuric acid and free iron (II) ions present, which result in a degradation phenomenon known as ink corrosion. Documents written using iron gall ink are very vulnerable to moisture, which can accelerate the degradation process.

In the case of Additional MS 70282 we have a manuscript which, after treatment to remove the inactive mould spores, needs to be washed in order to remove degradation products and strengthen the paper structure, but it is written using iron gall ink, which should not be exposed to excess moisture as this will accelerate its degradation. So what do we do?

In 1995 a new treatment for iron gall ink was proposed by senior conservation scientist/ chemist J.G. Neevel at the Central Research Laboratory for Objects of Art and Science (CL) in Amsterdam. Known as the Calcium Phytate Treatment, it uses a solution of calcium phytate in partnership with a de-acidification wash in a solution of calcium bicarbonate and is designed to both remove excess sulphuric acid present in the ink and to chemically complex the free iron (II) ions, thus preventing further degradation.

The first step is to wash the folios in a bath of reverse osmosis water until no visible degradation products (which cause the water to discolour as they wash out) remain. It may be necessary to change the water a number of times.

After immersion in the calcium phytate solution, the folios are washed again in a de-acidification bath, which contains calcium bicarbonate. This alkaline-reserve will remain in the paper after the treatment and help to neutralise acidity caused by the natural ageing of the paper and the ink. 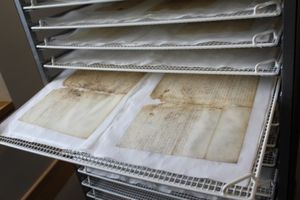 Fig 6: After wet treatment, the sheets are laid out on BondinaÂ®
and blotting paper on a drying rack and allowed to air dry before they are
repaired.

Although washing will reform the hydrogen bonds and make the paper stronger, repairs are still needed to support tears and infill missing areas. The most fragile folios, such as the mould damaged folio shown in Fig 1, will need to be fully lined with thin Japanese tissue. Japanese papers have very long fibres which make them ideal as conservation repair papers.

Wheat starch paste, which has been thinned to the consistency of double cream, is first brushed out onto a sheet of BondinaÂ® using a Japanese brush.

It is then brushed-out through the BondinaÂ® using a Japanese brush to remove any air bubbles and ensure a strong bond. After air-drying, the missing areas are in-filled with a matching Japanese paper, before the other side is lined in the same way.

After all repairs were completed the folios were tipped to guards of archival paper, collated, and given a new binding to protect them.

This manuscript is part of the Portland Papers, which were originally housed at Welbeck Abbey and deposited in the British Museum between 1947-1967 by His Grace, the seventh Duke of Portland as 'The Portland Loan.' They were allocated to the British Library in 1987, having been accepted by the government in lieu of Capital Transfer Tax.

The conserved manuscript can now safely be consulted by readers in the Library's Manuscripts Reading Room.

This manuscript was conserved by Timothy Nason and Gayle Whitby and bound by Douglas Mitchell.

Posted by Francesca Whymark at 5:17 PM

"Although the mould spores are no longer active, the damage remains"&"after treatment to remove the inactive mould spores" - how exactly both of above has been achieved - 1. Proving that spores are not active any more? 2. Removing the spores? (and the control of the efficiency of the process of "removing"?)

Hi Iksu, thank you for your comment. I will try to briefly answer your questions. Firstly, we describe the mould as 'inactive' because it is dry and powdery. In this condition the mould spores are dormant and not actively causing degradation. Active mould would be damp, slimy, and would smear if brushed. Secondly, there are a number of ways to treat mould but the most common method we use is a combination of brushing and vacuuming (using a HEPA filtered conservation vacuum cleaner) while working under extraction in a fume-cupboard. PPE such as gloves, mask, etc. are also worn. Finally, because mould spores are always present in the air in small quantities, our collection storage environment is maintained between 13Â°-20Â°C and 35%-60% RH, with stability over time being the most important thing. See the following booklet published by the Preservation Advisory Centre for more information: www.bl.uk/blpac/pdf/environment.pdf.