Goldfinisher: He’s the man, the man with the Midas touch

An event on gold finishing was held in the British Library Conservation Centre to celebrate a recent antiquarian acquisition of a rare example of an 18th century book cover lavishly decorated with gold. Gold finishing, or gold tooling, is the decorative process of covering the spine and/or covers of a book with gold leaf designs. Visitors including many VIPS such as the Dutch Ambassador got a unique chance to view the acquisition and to watch book conservator and gold finisher Doug Mitchell demonstrate the technique in person. 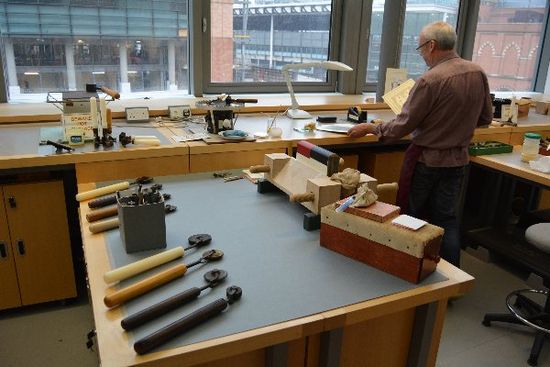 The 18th century acquisition is often referred to as the Binder’s Sample. It is thought that the good condition of the tooling, the high quality leather, and the use of 33 different tools are evidence that the cover was produced to showcase the binder’s skill when seeking new clients. It is a sample book cover (Folio 362 x 249 mm) of limp speckled calf dating to about 1730 and originated in Utrecht or Amsterdam. 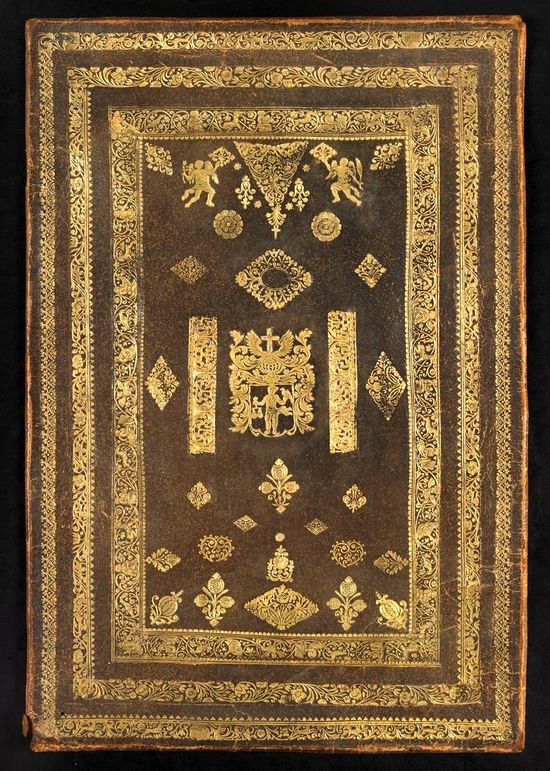 The Binder’s Sample, Utrecht or Amsterdam approximately 1730. 33 different tools were used to create this extravagant cover.

The musician roll used on the Binder’s Sample was a particularly fine roll and was a reverse cutting of a roll belonging to the Amsterdam Double Drawer Handle Bindery. This particular roll was used from the mid-1720s to 1730s on presentation copies of books for the luxury market. Below are some examples of the rolling tools used at the British Library. 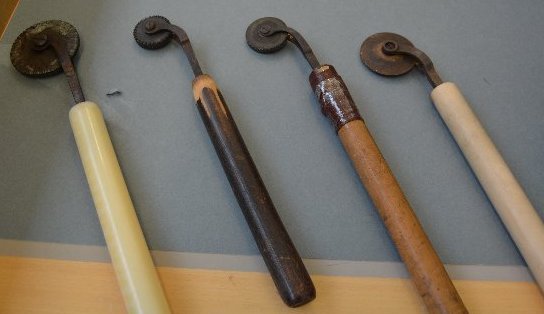 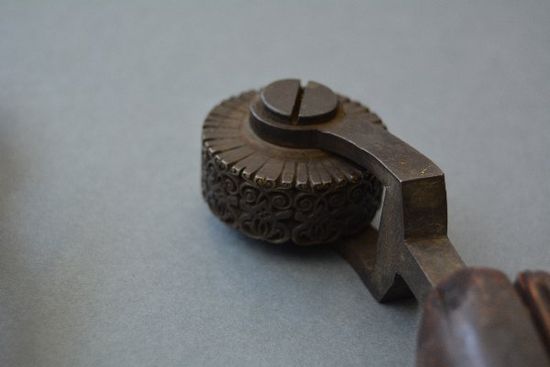 This rolling tool depicts interlacing spirals which create a flowing pattern along the binding when applied.

The central field of the Binder’s Sample showcases 27 different tools. In the centre is a coat of arms depicting a man in a loin cloth with the scales of justice in his right hand and a bird of prey in the left hand. Corner pieces include blooms, angels (one with a quill pen), stars, foliage, scallop shells, pomegranates and vases. 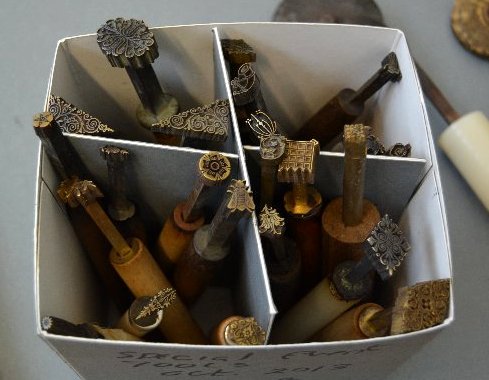 For the demonstration Doug used a goatskin leather dummy book held in a finishing press on the workbench. The leather was size washed with a wheat starch paste and an adhesive made of egg whites, called glair, was applied to the leather where the gold leaf was to be placed. The surface is then smeared with Vaseline. A sheet of 23.5 carat gold leaf was cut into a suitable size for the design and placed onto the glaired area on the spine of the volume. Gold leaf comes in two thicknesses; single and double with the latter used primarily by British Library conservators. 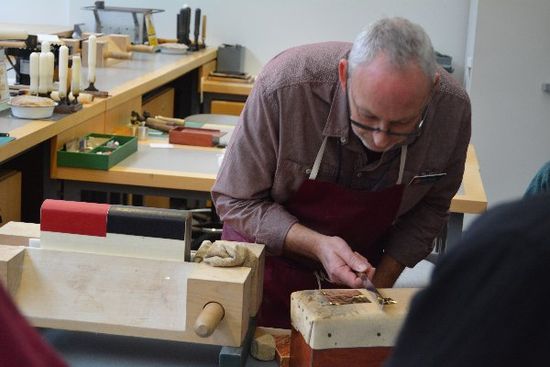 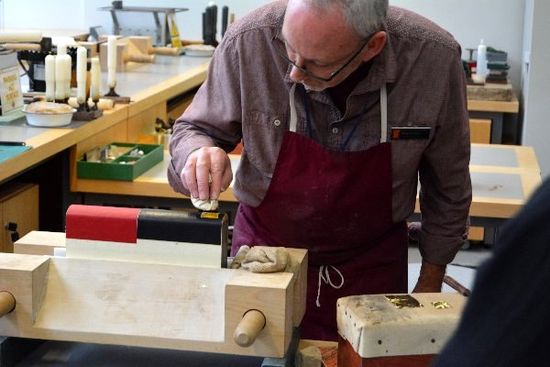 The gold is placed on top of the greased area of the volume.

A heated tool is then used to press the gold leaf permanently into the leather using a combination of heat, dwell and pressure, leaving an impression dictated by the shape of the tool. The remaining gold leaf is rubbed away revealing an intricate design. 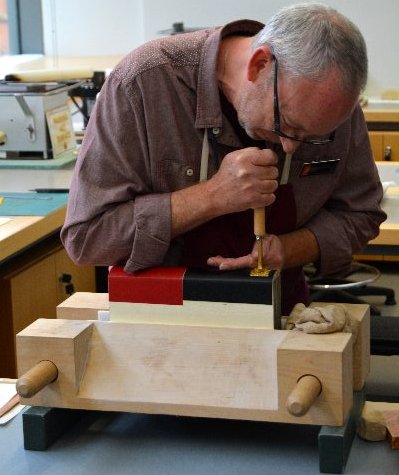 The heated tool is pressed perpendicularly onto the gold leaf which is on the spine of the volume.

Doug also demonstrated tooling onto cloth using a Type holder tool. In this case the word LIBRARY (my favourite word!) was pressed onto real gold foil. Larger tools can be used to apply text to the spine and is applied in the same way as smaller designs.

The gold doesn’t tarnish and has an affinity to the leather such that it is very difficult to remove. 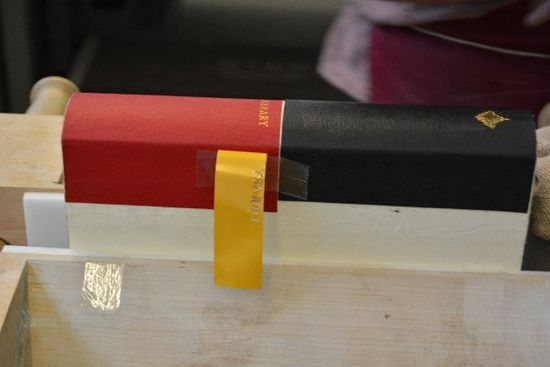 When the excess gold is removed the spine is left beautifully decorated.

Doug had previously prepared a British Library version of the Binder’s Sample, copying the format to display just some of the extensive collection of finishing tools here at the conservation center, shown to the right in the image below, which was on view for visitors to compare to the original. 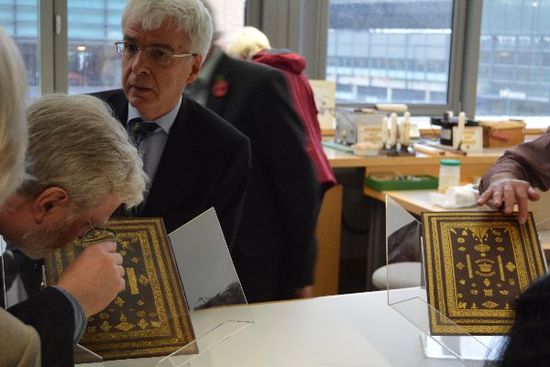 A sheet of Vivak was placed behind the Binder’s Sample by our conservators to allow readers to view the reverse side, which would be obscured if mounted on opaque material. 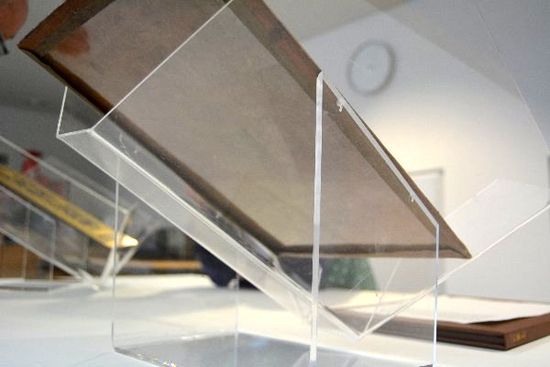 The Binder’s Sample as viewed from behind showing the Vivak reverse mount.

Although the popularity of gold finishing has declined in recent years, tooling is an important part of any conservator’s skillset. An exhibit showing the vast  array of tools available is on display in the Conservation Centre. 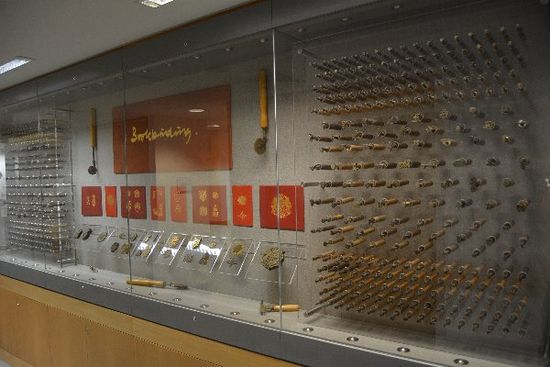 A display of bookbinding tools inside the Conservation Centre showing an example of the huge range of equipment available. Visitors were shown a display and given a demonstration of tools used in conservation.

Gold leaf is nearly always used for this type of decoration due to its lasting qualities. Other varieties include white gold leaf which gives a silver appearance, or pigment foils (red, green blue etc.) which can be used on cloth and paper bindings. The British Library uses gold finishing on all its leather bound books. Generally gold finishing is done to re-produce the design that was on the original, but some of our collections such as Sloane, Egerton, Harley and Cotton manuscripts have an existing format. When no reference is available designs are based on the year of the book by choosing the tools that were appropriate for that time period.

The skill of gold finishing is very difficult to master and requires precision, patience and perseverance!

Bookbindings in the British Library

Posted by Christina Duffy at 12:42 PM