Collection Care has excitedly accepted delivery of a new hyperspectral imaging system. The system is designed specifically for archival and cultural heritage imaging for the purpose of revealing hidden and faded information. Digital imaging experts MegaVision, who are based in California, design the system. The EVTM camera includes MegaVision’s Monochrome E7 50-megapixel back, computer controlled shutter and aperture, and custom hyperspectral parfocal lens, which is responsive over the entire range of silicon sensitivity. 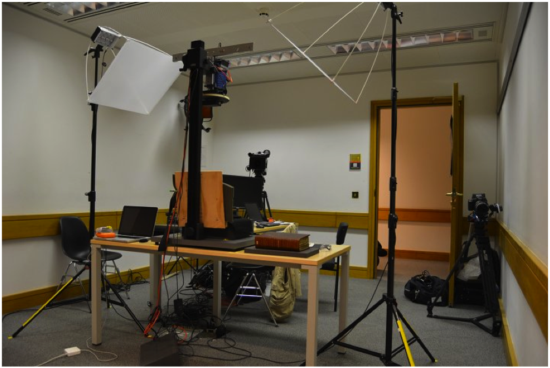 Testing of the MegaVision system, image shows a light brown table with the imaging system ontop, to the left of the imaging system is a laptop and on the right is a book on top of a sheet of plastazote. Either side of the table are LED sidelights with diffusers, the stands of the sidelights are yellow and black.

The system integrates two previously disparate imaging capabilities: high-resolution photography and multi-spectral imaging. Images are captured over 12 spectral bands from the near ultraviolet (365 nm) to the near infrared (1050 nm). Captured images are used for preservation and scholarly studies of British Library collections on materials such as parchment, paper, papyrus, inks and other constituents of cultural items. A series of palimpsests (parchment from which writing has been erased and overwritten) and Treasures of the British Library have been identified for imaging, which will take place in the New Year. 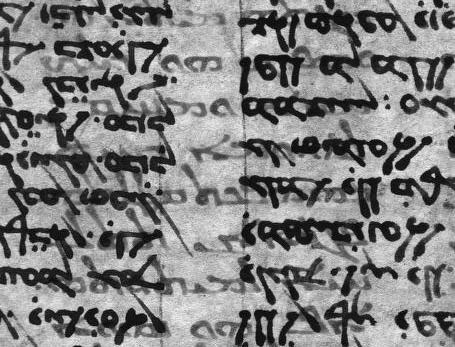 Cropped black and white image of a section of a Syriac manuscript showing evidence of previous writing under text.

The MegaVision system replaces the Forth Photonics MuSIS system, which was purchased in 2004 for work on the Codex Sinaiticus project, and has found many applications since. MuSIS creates spectral bands using band pass filters to filter the light after it is reflected from the collection item. The MegaVision system uses narrow-band LED illumination, which subjects the collection items to only the required light energy to expose the sensitive unfiltered monochrome sensor. The LED panels are configured with visible, UV and IR bands. This selective illumination process significantly reduces the light energy falling on collection items, and has the added bonus of looking very cool indeed! 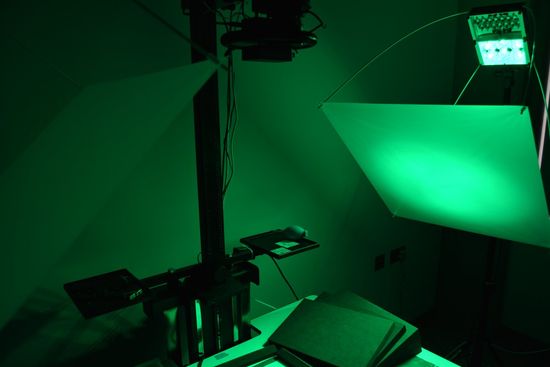 MegaVision's PhotoshootTM digital image capture software controls all aspects of capture as well as controlling a colour wheel which allows additional light modifications such as filtration to isolate fluorescene in concert with UV illumination.

The technology has been internationally heralded for its use on the Archimedes Palimpsest Project, the Gettysburg Address and the Waldseemüller map, while data is still being captured from St Catherine’s Monastery in the Sinai Desert. The datasets will become digital assets of historical and scientific value in their own right, and can be further processed to enhance regions of interest.

This is a landmark purchase for Collection Care showing the committment we have to furthering the understanding of our collections and the importance of science and research in archival institutions. The quest for information recovery and discovery continues!

Posted by Christina Duffy at 7:42 PM