Conservation work never ends; we had just finished working on the Comics Unmasked exhibition when the First World War material arrived in the studio. The next exhibition: Enduring War: Grief, Grit and Humour in the Folio Society Gallery is a very topical one. The year 2014 marks the First World War Centenary and the start of commemorative events worldwide. In Britain a number of interesting documentaries, discussions, drama, etc., aiming to explain the events leading to the outbreak of the war have already been aired on television, radio and other media. The First World War Centenary commemorations have not by-passed the British Library.

The exhibition: Enduring War: Grief, Grit and Humour opening on 19 June 2014, is part of the Library’s contributions to these events. The exhibition will showcase nearly 80 items from our collections looking at the human aspect of the war, and how ordinary people coped with the momentous events of the war. The space for the exhibition in the Folio Society Gallery is smaller than for our main exhibitions, but it will host some large and well known recruitment posters and leaflets, together with smaller, less known and more personal items including letters, postcards, photographs, poems, prayers, songs and even knitting instructions!

Out of the 30 items prepared for the exhibition by the conservation department the majority needed standard hinging and mounting, but some also had to be flattened and repaired. 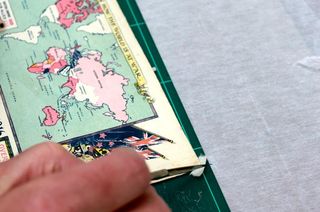 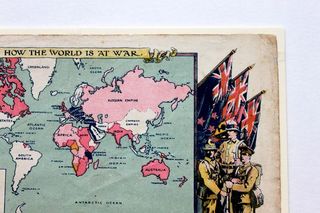 Pictures 1 and 2: Trimming a corner repair and the finished repair showing the top right hand corner of ‘How the World Is at War’ certificate.

The ‘How the World Is at War’ certificate is one of many the Overseas Club produced for schoolchildren who raised money for soldiers and sailors serving in the war. The one above was issued to Elsie Donald in 1916.

Below are two examples of World War One recruiting posters: ‘These Women Are Doing Their Bit Learn to Make Munitions’ and ‘Lads You’re Wanted: Go And Help’. Both posters are displayed on the wall and needed to be mounted flush (hence flush mounted) onto 100% cotton Museum Board for support. 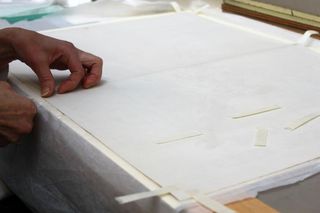 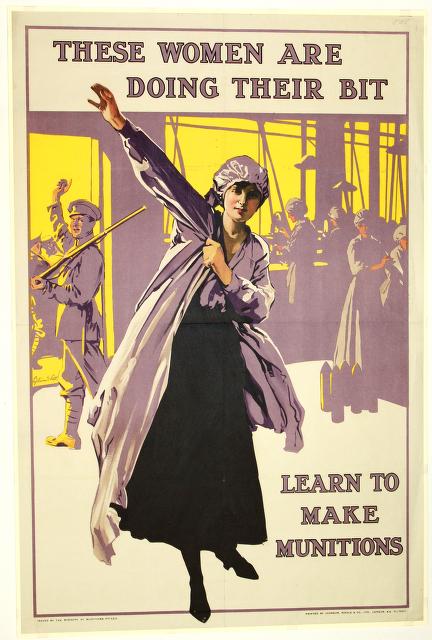 Picture 5: The poster ‘These Women Are Doing Their Bit Learn to Make Munitions’ mounted and ready for the exhibition.

The poster ‘These Women Are Doing Their Bit Learn to Make Munitions’ designed by Septimus Edwin Scott and measuring 760 mm x 510 mm is one of the larger posters in the exhibition. The black, yellow and purple lithographic print was issued by the Ministry of Munitions in 1916-17 and was aimed at recruiting women for the war effort. The campaign must have been very effective - by the end of the war almost one million women were employed in the war industry supplying munitions and weapons to the Front.

The ‘Lads You’re Wanted: Go and Help’ poster below is smaller, but no less powerful in its message. It measures 760 x 150 mm and is quite long. It was folded in half in storage and therefore required flattening prior to mounting. 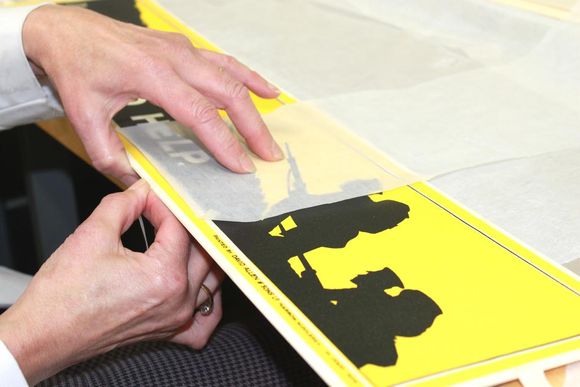 Picture 6: Attaching a poster to a board (flush mounting).

The poster showing soldiers in silhouette will be displayed in the first section of the exhibition explaining how and why people joined the army. The black-and-yellow lithograph was published by the Parliamentary Recruiting Committee in 1915. The Committee’s sole purpose was to assist the War Office in orderly recruitment, and the poster campaign was one way of doing so. The posters were published in great numbers by different printing companies, often with slight variations in design, so all had to be passed as fit for use by the Committee. The poster above is from the British Library’s collection and was printed by David Allen and Sons in Harrow.

The exhibition is only one aspect of the ongoing commemorative events. In the run up to the centenary of the First World War the Library has been involved for three years in a major Europeana 1914-1918 Project digitising hundreds of documents including personal papers, trench journals, photographs, letters - as well as newspapers, maps, posters, etc., all relating to the 1914-18 war. Over 250,000 pages of collection items have been digitsed providing a wealth of the material ready to be explored, interpreted and narrated. A selection of the newly digitised material is available free to researchers, historians and students and is introduced through our new learning website, World War One.

The exhibition ‘Enduring War: Grief, Grit and Humour’ aims not only to showcase the original objects from our collection but will also provide a link to the work done on the Europeana project through an audiovisual art installation.

Posted by Christina Duffy at 16:29:48 in Conservation , Exhibitions , Materials , Paper

Posted by Christina Duffy at 4:29 PM