Some of you may recall that I recently blogged about the "Off The Map" competition launch, held at the British Library last month. As part of the competition, on Tuesday 12 February, Tom Harper, the Library's Curator of Antiquarian Mapping, and myself were very pleased to welcome Game Art Design students from De Montfort University, Leicester, to look at the originals of the digital copies of historical maps, which they will be transforming into virtual gaming environments. 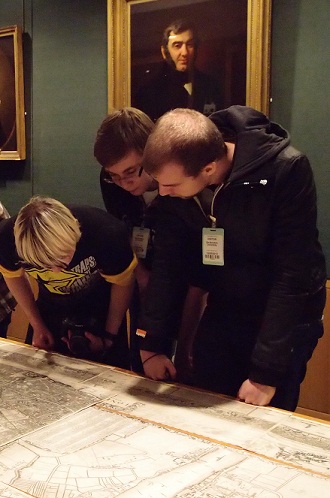 Of the three site choices set by the competition: Stonehenge, the Pyramids at Giza, and the Tower of London, De Montfort have decided to choose the Tower, but broadening their remit significantly to include the area of the City with London Bridge, Pudding lane, and the riverside wharves and markets.

They are not short of source material. Thousands of maps and prints from 1550 to 1850 showing every nook and cranny of the city are available, including digital versions, for example, at http://www.bl.uk/onlinegallery/onlineex/crace/. The originals, however, provide a level of detail and a sense of closeness to their historical periods that is difficult to replicate.

Engraved lines emphasise the texture of the stone and wooden buildings, the straw roofs. The scale, of William Morgan’s 1682 map of London (160 x 250 cm) rather too large for a smartphone. The original maps were suitably pored over, as only maps can be.

Tom was interested to learn that not only are they looking to recreate the architecture, the layout, the fabric of the city, but they will be including atmospheric effects, people, sounds. Bustling Billingsgate market? Tower Hill on execution day? These snapshots have been captured by maps and views. The engraved panorama of London by Visccher of 1616 was undoubtably the most pored-over. In it, the bustling southern end of London Bridge is furnished with heads on spikes (their constituent bodies are shown lined up before the Tower) and market traders blocking the streets.

Visscher’s view is a truthful, rounded portrayal of London from 1616, produced using the most sophisticated visual, surveying and reproductive techniques. It is entirely appropriate then that it should inspire the Off the Map competitors; using similarly advanced techniques to create an equally vivid map. 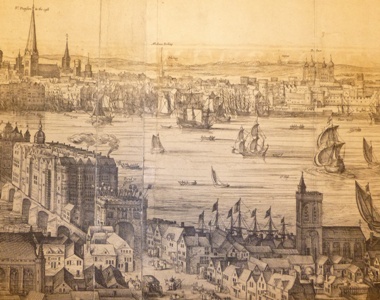 In addition to viewing the maps and asking Tom lots of questions, they also had a guided tour of the building and Steve van Dulken kindly showed the group around the Business Intellectual Property Centre; explaining the resources and services available there. 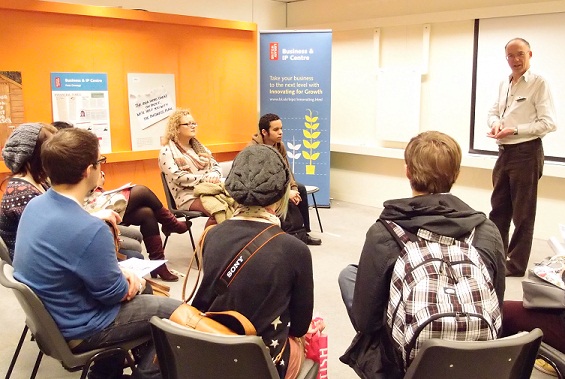 The students got a lot out of their visit and said this about the day:

"We can’t thank Stella, Tom and the staff of the British Library enough for our unforgettable visit. We were given a fascinating tour of the building and some of its history, but best of all we had an opportunity to see some beautiful maps of London from the 1600's, up-close! We spent a great deal of time scanning and surveying the maps, gathering details about the scale, architecture and layout of the area we were interested in. Some of the maps offered us a new perspective (literally, in some cases!) and inspired some great ideas from each of us. We came away bubbling with ideas."

You can read more in their blog "Pudding Lane Productions".

Posted by Stella Wisdom at 3:55 PM