What would it take to make a Victorian joke funny again?

Nothing short of a miracle, you might think. After all, there are few things worse than a worn-out joke. Some provoke a laugh, and the best are retold to friends, but even the most delectable gags are soon discarded. While the great works of Victorian art and literature have been preserved and celebrated by successive generations, even the period’s most popular jokes have now been lost or forgotten.

Fortunately, thousands of these endangered jests have been preserved within the British Library’s digital collections. I applied to this year’s Labs Competition because I wanted to find these forgotten gags and bring them back to life. Over the next couple of months we’re going to be working together on a new digital project – the ‘Victorian Meme Machine’ [VMM]. 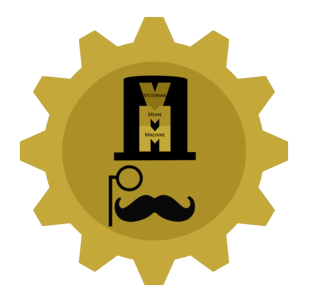 The VMM will create an extensive database of Victorian jokes that will be available for use by both researchers and members of the public. It will analyse jokes and semi-automatically pair them with an appropriate image (or series of images) drawn from the British Library’s digital collections and other participating archives. Users will be able to re-generate the pairings until they discover a good match (or a humorously bizarre one) – at this point, the new ‘meme’ will be saved to a public gallery and distributed via social media. The project will monitor which memes go viral and fine-tune the VMM in response to popular tastes. Hopefully, over time, it’ll develop a good sense of humour!

Let’s take a closer look at how it’ll work. Here’s a simple, two-line joke taken from a late-Victorian newspaper:

Chicago Woman: How much do you charge for a divorce?
Chicago Lawyer: One hundred dollars, ma’am, or six for 500dols.

Users will then be invited to give the joke descriptive tags, highlight key words, and describe its structure. Here’s an example of how our sample joke might be encoded:

Encoding a joke for the VMM

This will give the VMM all the data it needs to pair the joke with an appropriate image. In this first example, the joke had been paired with an image featuring a woman talking to a lawyer and presented in the form of a caption: 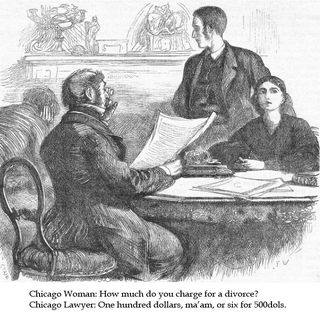 Joke paired with an image to create a meme.

We also hope to present the jokes in other formats, such as speech bubbles: 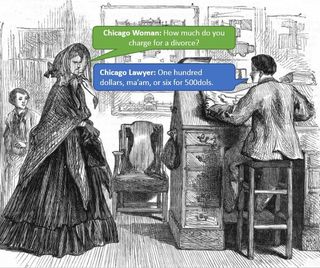 Each of these images is a close match for the joke – both feature women speaking to men who appear to be lawyers. However, if we loosen these requirements slightly then the pairings begin to take on a new (and sometimes rather bizarre) light: 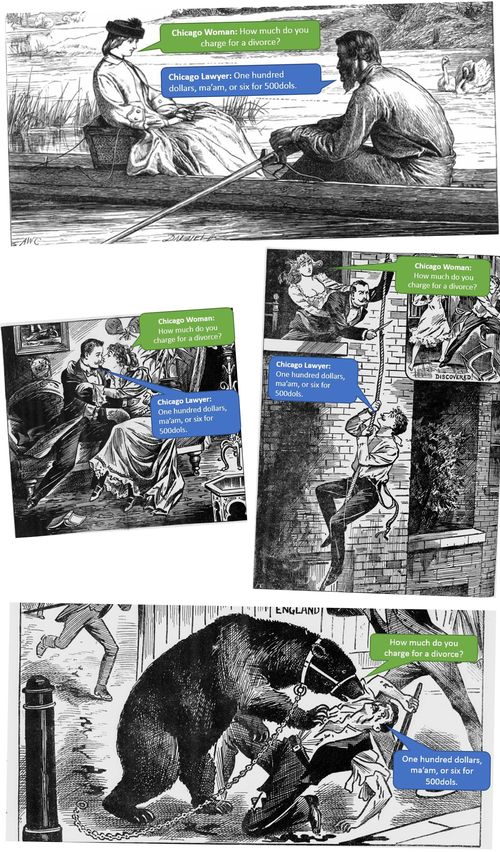 A selection of representations of the joke.

These are just some early examples of what the VMM might offer. When the database is ready, we’ll invite the public to explore other ways of creatively re-using the jokes. Together, I hope we’ll be able to resurrect some of these long-dead specimens of Victorian humour and let them live again – if only for a day.

Bob Nicholson is lecturer in history specialising in nineteenth-century Britain and America, with a particular focus on journalism, popular culture, jokes, and transatlantic relations. Bob has been exploring representations of the United States, and the circulation of its popular culture, in Victorian newspapers and periodicals. He is a keen proponent of the Digital Humanities and likes to experiment with the new possibilities offered to both researchers and teachers by digital tools and archives. He has written for The Guardian, had his research covered by The Times, and was shortlisted by the British Broadcasting Corporation (BBC) and Arts and Humanities Research Council (AHRC) in their first search for New Generation Thinkers (2011).

Posted by Mr Mahendra Mahey at 9:00 AM