In December 2013 the British Library uploaded over a million images from our 19th century digitised books onto Flickr Commons, with the invitation for anyone to remix, re-use and re-purpose the content as they wish.

The response from the online community was outstanding, but by far the most unexpected use of the British Library’s Flickr Commons images is happening this week - the collection has inspired four large-scale artworks on display at this year’s Burning Man festival in the Nevada desert, created by David Normal, a California-based artist with a special interest in 19th century illustration. 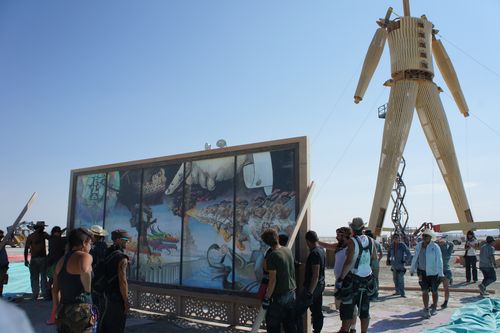 Before he headed off to the desert to install his “Crossroads of Curiosity’ artworks at the festival, we spoke to David about how this came about, and how he used the image collection:

What first attracted you to the idea of using 19th Century illustrations in your art?

Beginning as a teenager I was interested in making “seamless” collages, in which the elements go together so smoothly that it looks as though it were all one illustration. I love Max Ernst’s collage novel, “Une Semaine De Bonte” which took this seamless collage aesthetic to its zenith using 19th century illustration.  Recently, I began painting over digital collage prints, and this process opened up a lot of possibilities, to the point where I felt that I could use the 19th century in a fresh way that is not derivative of Ernst’s work.

How did you come across the British Library’s Flickr Commons collection?

The guitarist of the punk band “Flipper” mentioned something about it and at the time I had already initiated the plan to create paintings based on 19th Century images for Burning Man, and so learning of this vast online collection was thrilling and truly fortuitous since it was exactly what I was looking for.

How has the Library’s collection informed your artwork?

After being introduced to the collection I realized that everything I needed was there.  I decided to use the collection exclusively, and make that one of the hallmarks of the project. Indeed, I feel that the “Crossroads of Curiosity” celebrates this amazing collection.

One of the most striking aspects of the collection is its colossal size.  Having a lot of material to choose from is important in collage making, since out of excess come the chance juxtapositions that are so magical.

Another thing that was very helpful to me was the randomness.  The majority of the images are in no particular order in the photostream, and viewing the images in succession was like taking a journey through a landscape of illustrated symbols.

How did you identify which images you wanted to use?

Certain images have some symbolic power or strangeness that intrigues me and those are the images I am drawn too.  This has to do with thematic preoccupations that percolate up from my subconscious on the one hand, and with my taste in things on the other, and also with the specific theme I am working with on the Burning Man project, which is “Caravansary - The Silk Road”.  I have favorited nearly 3000 images on my own Flickr page.

I start with selecting several images that I think will go together well.  I bring them into Photoshop and then begin to arrange and play with them.  As the composition develops the images are increasingly cleaned up, edited, and composed together.

These images below outline the development of the collage painting, “Conflamingulation”, one of four which will be featured on 8’x20’ lightpanels at Burning Man: 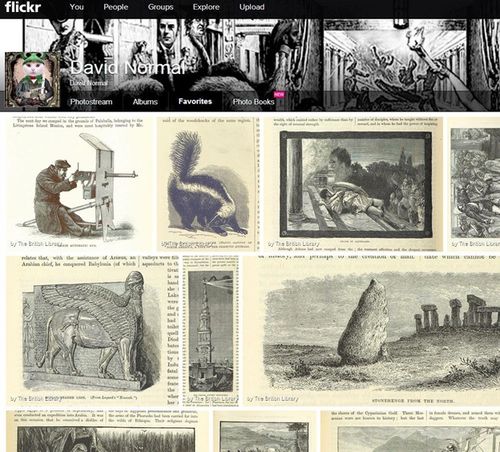 The chance conjunction of the machine gunner and the skunk suggests an idea for a collage.

A rough collage is made.

Different arrangements are experimented with.

A final version is arrived at that is the basis of the painting.

Which is your favourite of all the images you’ve discovered on the Flickr Commons collection?

I think I have not viewed more than 10% of the collection altogether, so I can’t say that I have enough familiarity to choose a favourite fairly.  However, if I had to select a single image then perhaps I would choose this skunk because of his great versatility as a piece of clip art. 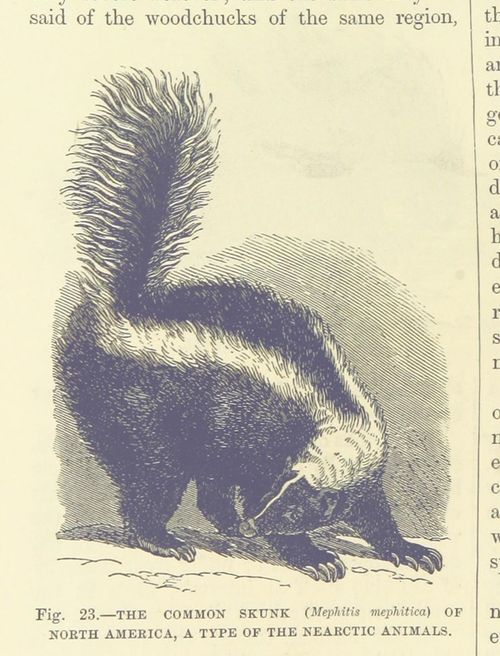 Image available at the British Library Flickr Commons page
Taken from  page 42 of the book, OUR EARTH AND ITS STORY, A Popular Treatise on Physical Geography, Edited by Robert Brown, Published by Cassell and Company Limited

Being able to use illustrations as a way of approaching books is interesting - typically the reverse is the case;  reading a book you find the illustrations and not vice versa.

What do you hope that people at Burning Man will take from the finished pieces?

Larry Harvey, the director of Burning Man, has said that he hopes the pieces will evoke a feeling of “romance”, in the sense of the romanticism of myths and fairytales such as the Arabian Nights.  I will concur with that.  The pieces are meant to show the intersections of distant times, places, peoples and things in humorous and thought provoking ways.  It is a cabinet of curiosities that has opened up to encompass the world in series of dramatic tableaux.  I hope the Crossroads of Curiosity fills the viewer with wonder, and arouses their own curiosity.

David Normal’s ‘Crossroads of Curiosity’ artworks are on display at the Burning Man Festival from 25 August – 1 September.

Here is one his illuminated panels from Burning Man 2014: 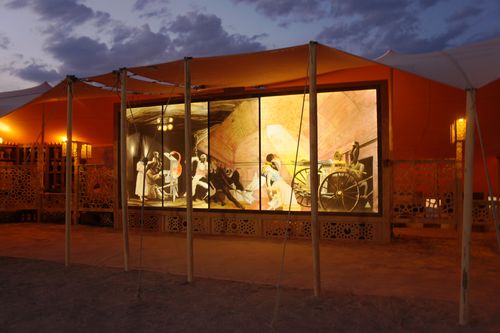 One of David Normal's illuminated panels for Burning Man 2014.

You can discover more about his work at www.davidnormal.com.