Wikimania and UK Wikimedian of the Year 2014 Awards

This year it was very exciting that Wikimania 2014, the official annual conference of the Wikimedia Foundation, was held in the UK for the first time. It was a wonderful opportunity to catch up with old friends; such as the Library’s previous Wikipedian-in-Residence Andrew Gray, I also met new interesting folk, many from other libraries and cultural heritage institutions around the world, as there was a whole strand of the programme devoted to the GLAM sector.

Wikimedia UK used the conference closing ceremony for Jimmy Wales to announce the winners of the UK Wikimedian of the Year 2014 awards. The main award went to Ed Saperia for his hard work in organising Wikimania 2014. GLAM of the Year went to our friends (and my old colleagues) at the National Library of Scotland, Educational Institution of the Year to the University of Portsmouth; with Professor Humphrey Southall, who the British Library collaborates with on the successful Geofreferencer project, collecting their award. It was also very pleasing for Honourable Mentions to be given to Andy Mabbett, also known as Pigsonthewing, who started the Voice Intro Project and last, but definitely not least, the British Library received an Honourable Mention for the Mechanical Curator and Flickr Commons image release. Ben O’Steen from British Library Labs who created the Mechanical Curator received the award on behalf of the Library and had the privilege of shaking Jimmy Wales’ hand on stage. 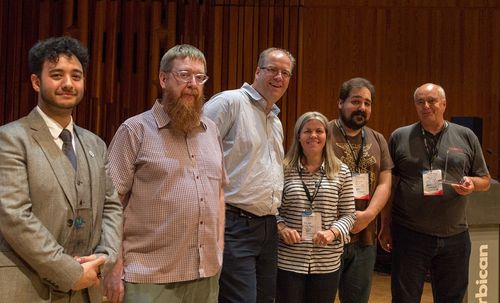 Plans are now under way for next year’s Wikimania in Mexico City, which will take place 15-19 July 2015 in a library for the first time: la Biblioteca Vasconcelos (Vasconcelos Library) also known as the Megabiblioteca ("megalibrary"); from looking at photos I can see why it has this nickname! It also includes a huge whale sculpture by Gabriel Orozco in the centre of the building, for more info on how this was created and assembled check out this Tate blog post.

Posted by Digital Research Team at 9:23 AM