Aquiles Alencar-Brayner, Digital Curator in the Digital Research team announced the two winners of the third British Library Labs 2015 Competition as part of his conference presentation on 'Digital Scholarship and its Impact on Latin American Studies' at the Seminar of the Aquisition of South American Library Materials (SALALM) held at Princeton University on the 15 June, 2015 at 1830 BST. 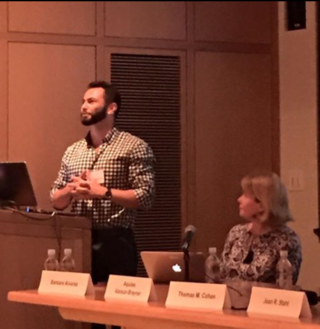 A judging panel made up of leaders in Digital Scholarship, some who sit on the British Library Labs advisory board (Melissa Terras at University College London, Andrew Prescott at Kings College London, Tim Hitchcock at University of Sussex, David De Roure at the University of Oxford and Bill Thompson from the BBC and an observer Louise Denoon from State Library of New South Wales, Australia) and members of the British Library's Digital Scholarship team met at the end of May to decide upon two winners of this year's competition. After much deliberation, we can now proudly announce that the winners for the 2015 British Library Labs competition are 'Crowdsourcing Objects': repurposing the 1980s arcade console for scholarly image classification' and 'Political Meetings Mapper: bringing the British Library maps to life with the history of popular protest.'

Is the web a liability for those seeking our attention for scholarly means? If we put an arcade game devoted to crowdsourcing in a public place, would you focus your eyes, walk over, and play?

The great promise of crowdsourcing is that it captures a little effort from lots of people. To facilitate this, crowdsourcing websites are accessible from anywhere with a wi-fi connection. We tend to see the web as a great asset because it can, in theory, reach just about anyone. And yet, we all have moments of downtime that we could devote to the greater good, classifying images or transcribing text. But we don't. These sites compete for our attention with videos of cats and endless emails, which too often win out over the chance to transcribe something.

This project experiments with ‘crowdsourcing objects’, to replace the ubiquity of the crowdsourcing website with the scarcity of a physical machine. Inspired by the 'maker' community and physical computing, this project takes the crowdsourcing experience off the web and puts it into a 1980s-style arcade game, replete with joysticks and plastic shiny buttons. This old interface put to new uses acknowledges that people increasingly associate their computers with work, and by providing a digital experience that doesn't feel like a computer, we can tap into energy currently reserved for play.

This experiment will provide new knowledge about what motivates us to participate in crowd-generated data collection, drawing upon the increasingly important field of game studies within the digital humanities, as well as the powerful force of nostalgia for a generation of scholars who came of age with physical video game machines. In the process, this crowdsourcing object will encourage users to help build a catalogue of metadata related to the British Library’s one million image Flickr collection. By asking users to help classify a subset of the collection in ways that are easy for humans but difficult for computers, scholars will provide useful datasets for future research on visual culture. This new data will be made freely available to researchers, and will form the basis of future machine learning experiments in which the categorisations of the human gamers are used to ‘train’ machines to complete the classification process.

Dr Adam Crymble is a lecturer of Digital History at the University of Hertfordshire. His research looks at the history of migration and integration through an analysis of large sets of digitised records. These records make it possible to discern trends in migration and conflict that are impossible to pick up on through close reading alone.

Adam is also actively involved in teaching digital history. He is an editor of The Programming Historian, an open access, peer-reviewed monograph that provides introductory digital history lessons to those looking to learn new ways to engage with the past. He is one of the convenors of the Digital History seminar at the Institute of Historical Research in London. In 2008 he published How to Write a Zotero Translator: A Practical Beginners Guide for Humanists.

Political Meetings Mapper: bringing the British Library maps to life with the history of popular protest

Protest is about space and place. Opposing political groups claim the uses of public spaces, meet in places that have long histories of protest or create their own sites as symbols of their identity. Newspapers are a main source of data on when and where historical protests and political meetings occurred, but historians have so far only been able to plot the locations of small numbers of political meetings manually. 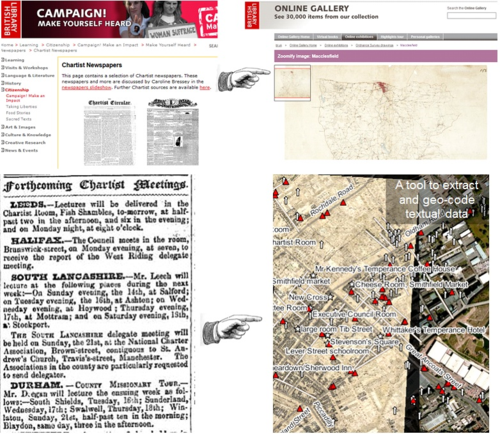 Political Meetings Mapper will develop a tool to extract notices of meetings from historical newspapers and plot them on layers of historical maps in the British Library's collections. It will visualise the locations of political events in the crucial era of the 1830s and 1840s, when Chartism, the first and largest movement for democracy in Britain, held thousands of meetings and demonstrations to campaign for the vote. By plotting the meetings listed in the Chartist newspaper, The Northern Star, from 1838 to 1844, it hopes to discover new spatial patterns in where popular politics happened, and in so doing, help answer the questions of how and why it happened.

This project showcases the British Library's collections and combines them in a way not done before: the geo-referenced maps in the BL geo-referencer and Flickr commons, the Ordnance Surveyors' drawings, and the 19th century newspaper collection. It will develop a tool for text-mining and geo-locating the records of political meetings, and enable anyone to access the maps and data on an interactive website. It will then aim to make the tool eventually adaptable to enable scholars to plot any form of event and spatial information using historical texts and maps. Geographers and urban planners have long used digital methods in their research: this project seeks to show that historians aren’t being left behind in these developments. It seeks to generate new questions as well as answers that will lead to new research not just in history and heritage but also in the sociology of social movements and urban planning.

Political Meetings Mapper will also demonstrate the relevance and legacy of the history of democracy for today’s society. Regions, towns, even streets will find a longer sense of their political heritage, enabling them to find out what meetings or events occurred in their area, and therefore encourage a continued engagement with politics among local communities.

Dr Katrina Navickas is a Senior Lecturer in History at the University of Hertfordshire, and Director of the Centre for Regional and Local History. Her main research interests are in the history of popular politics and protest in late 18th and early-mid 19th century Britain, particularly in the North of England. She experiments with GIS and mapping protests and meetings.

She is also a co-investigator on a BA/Leverhulme funded project led by Dr Robert Poole to recatalogue and digitise the Home Office disturbance papers at The National Archives.  She has published 'Loyalism and Radicalism in Lancashire, 1798-1815'  (Oxford Univ. Press, 2009) with her second title, 'Protest and the Politics of Space and Place, 1789-1848' due for release by Manchester University Press towards the end of 2015.