Crossroads of Curiosity - 6 Days to Go!

In December 2013, BL Labs and Digital Research Teams released 1 million algorithmically snipped images from 65,000 digitised books on to the Flickr Commons. Since then, the British Library Flickr Commons photostream has amassed a staggering 260 million views.

Just a week after the release, one of those viewers was David Normal, a collage artist from California, interested in 19th century illustration for his work. Following a Facebook posting about the British Library Flickr Commons launch from the guitarist of the punk band ‘Flipper,’ David was thrilled to discover the serendipitous size, quality and relevance of the photostream content with his plans for a project he had organised with the annual arts festival ‘Burning Man’ in the Nevada desert, USA.

As the 2014 Burning Man theme was ‘Caravansary,’ David made a series of paintings called a 'Crossroads of Curiosity'. His idea was to take the notion of a 'Cabinet of Curiosities' and, in his words, ‘expand it outward from the rectilinear arrangement of objects in a case' to a series of tableaus of human dramas, a collection of strange things and incidents that are occurring at a crossroads of experience.’

After initially creating four 3 ft. by 8 ft. paintings, David transformed them into four 8 ft. by 20 ft., double sided and illuminated light boxes that were built around the base of the Burning Man statue, forming the centrepiece of the event. Over 70,000 people came to the event and saw the work. It was a fantastic example of the creative re-use of digital content the Library made openly available.

In October and December of last year, David was invited to the Library by BL Labs to talk about the ‘Crossroads of Curiosity’ project and to build on the summer’s discussions that had initially started with digital curator Nora McGregor on how to showcase his work at the Library. Subsequently Mahendra Mahey (BL Labs Project Manager), Jamie Andrews (Head of Cultural Engagement), Claire Robe (Cultural Engagement Manager) and Richard Warren (Building and Projects Manager) have developed the path for David and his team to bring his installation safely to the British Library piazza. The past week has seen many hours of staff support as a lumbering heavy goods truck has carefully negotiated the Library grounds in the early hours and even caused an initial consternation as the thick bolt that held the truck rear doors solid refused to budge. But thankfully bolt cutters were eventually found and the big build has begun! 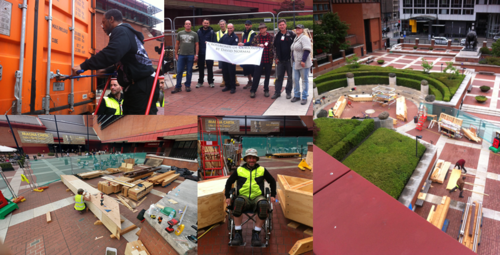 The progress so far...negotiating the bolt, David Normal and his team, a bird's eye view and testing the build for wheelchair access.

So a year on and we are proud to announce that the installation will be unveiled at the forthcoming ‘Crossroads of Curiosity’ special event on the 20th of June, with talks from the founder of Burning Man Larry Harvey, David Normal, Viktor Wynd from the Last Tuesday Society and Museum of Curiosity. This will be followed by an exclusive outdoor launch party and bar – featuring the illumination of the installation at dusk – and complemented by a celebration of creative reuse of BL content with performances, readings, sounds, visuals from artists and scholars. The evening will be soundtracked by scratch-and-mix DJ Yoda – who has also experimented and created new tracks with BL sound collections.

Look out for the next blog post detailing the evening’s order of events and latest news. We look forward to seeing you there. Only a few tickets are left!

Posted by Digital Research Team at 8:00 AM