This BL Labs guest post comes from Dr Bee Wilson. Bee is the chair of the Oxford Symposium on Food and Cookery.

‘By a curious schizophrenia, our culture trumpets that we are what we eat, yet devalues women’s work and inventiveness in food preparation’.  This thought, from Autumn Stanley’s 1993 history of female inventors (Mothers and Daughters of Invention) was the impulse behind two recent ‘wikithons’ at the British Library. Wikipedia is now our default way of getting knowledge. Yet when it comes to female food experts, there are huge and puzzling gaps, reflecting the fact that most wiki editors are men. How could there be an entry on Jack Drummond, nutritionist at the Ministry of Food during the war, but not on Dorothy F. Hollingsworth, his collaborator?

Back in the autumn, a group of us connected with the Oxford Symposium on Food and Cookery became aware that Wikimedia UK was working to redress the gender imbalance. The Symposium includes the kind of food scholars who are driven crazy by Wikipedia: the lacunae, the myths, the inaccuracies. But very few of us had ever taken the leap to editing it. We heard on Twitter that there had been an editathon for ‘Women and Classics’. Why not ‘Women and Food’

It would never have happened without the energetic collaboration of Polly Russell at the British Library, who provided us with a room to work in, coffee, cake and sandwiches (consumed away from the books) but, most importantly, the intellectual resources of the library, ranging from books and articles to the oral history archive. The thought was to transfer a little of the combined knowledge of the Library and the Symposium about women and food onto Wikipedia.

The shock of the first wikithon day, in November 2014, was just how little we managed. Wikipedia editing is slow: the endless strange syntax (those pesky double brackets!) and the feeling that you are working in a topsy-turvy world where secondary sources count for more than primary. Participants – including Elisabeth Luard, Jill Norman, Ursula Heinzelmann, Jake Tilson and Catherine Brown– created a group list of over 200 women living and dead that we felt deserved entries, or better entries. Yet that first day, after being trained in the ways of Wikipedia by Roberta Wedge of Wikimedia UK, we created only 10 new pages and improved a further 10.

It was a start. We created entries, among others, on Judy Rodgers, the influential Californian chef of the Zuni café; and Mrs Dubois, an eighteenth-century inventor of ‘portable soup’. We wrote about Caroline Walker, the brave British food campaigner, who died of cancer aged 38; and the dinner lady Jeanette Orrey.  And the work continued after the day ended. Jane Levi completed a superb entry on Sophie Coe, the late anthropologist and expert on the history of chocolate. Gastronomica founder Darra Goldstein who had been participating via Skype from the States, completed an entry so good it was ‘featured’ on the Wikipedia main page. Look it up: it’s on Phyllis C. Richman, a food critic once known as ‘the most feared woman in Washington’. 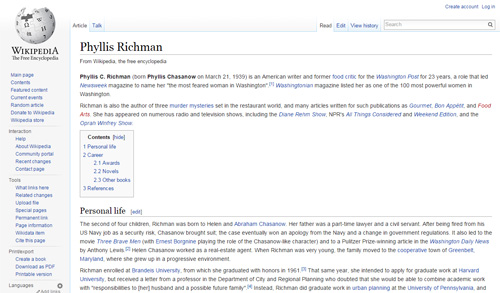 By the time of our second recent British Library ‘wikithon’ on July 6th, we got wiser to some of the frustrations of wiki-editing. Experienced Wiki editors David Palfrey and Andrew Dalby guided us on how to launch an entry that won’t be instantly taken down. ‘As the very first reference, put a secondary source’, Palfrey advised. 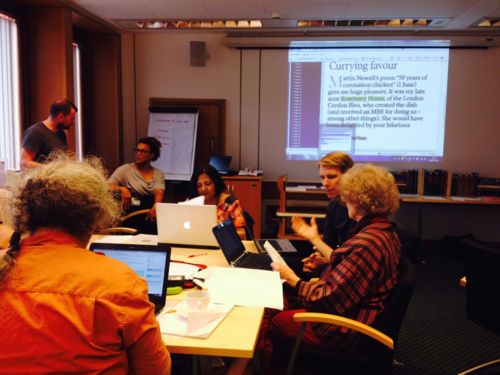 Women in Food Wikithon at the British Library

Bit by bit, the entries grew. Marcia Zoladz from Brazil found exactly the book she was looking for – Culinary Sparklets by Beatrice A.Vieyra, an Anglo-Indian cookery writer; now on Wikipedia. New participants Bel Castro, Sejal Sukadhwala and Jeanne JK Kim wrote about women from the Philippines, India and Korea. Carolin Young worked on food myths associated with Catherine de’Medici: a huge subject. Malcolm Thick completed an entry on Countess Morphy, the 1930s writer famed for her recipe for iguana fricassee. The room cheered. A sign of how engrossed we were in the work: the news that cake had arrived next door was greeted with sighs of reluctance to leave our screens. Meanwhile, we are trying to create an Oxford Symposium community of wiki editors to share ideas and support via email, and keep the project alive.

Posted by Digital Research Team at 11:20 AM