From Data to Art: the Internet of Cultural Things

We have recently started an AHRC funded project in partnership with King’s College London and University of Southampton called “Internet of Cultural Things: Creative Explorations of Data in Cultural Institutions.” As the title suggests, the aim of the project is to explore new perspectives on the creation, use and understanding of the data produced by the BL, opening up cultural data to creative and critical scholarly analysis.

Different sets of data ranging from items ingested into our digital repository to catalogue searches, to item requests – to quote here some examples – will be explored by the artist-in-residence chosen for the project, Richard Wright, who will work on the data in order to produce a work of art that translates the Library’s relation with its collections and users.

I have just joined the British Library as artist in residence and am very excited to be part of this research project instigated with Mark Cote and Jussi Parikka. In a nutshell, my aim is to use data visualisation to make public art at the British Library, in order to “transform the public's relationship to cultural institutions”.

The project is not so much about extending services that already exist, providing other ways to do what we are already doing or just accessing more and more information. It is about using experimental art to “transform” our thinking about what is possible with data, public access and institutional spaces. So we are interested in questions like - how will massive amounts of publicly available data effect the way people use libraries and, more widely, how will it alter what kinds of culture and intellectual life it is possible for people to engage in? 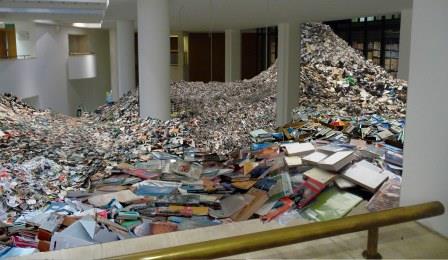 Over the course of the coming year I will be proposing and testing new ideas for the possible futures of cultural data. These will be closer to artistic ideas about data rather than visual design and styling, information graphics or graphics for scientific epistemological purposes. I sometimes refer to this approach as bridging the gap between data and everyday experience. I am currently looking at ways to give datasets a “voice” so they can “talk” to each other, whether we can read a book using someone else's brain, a way to borrow books from other readers libraries and how to judge a book by its cover.

Public engagement with data is a key aspect of the project. Through a series of site-specific installations at the BL, we want to transform public conception regarding cultural data by demonstrating the value of an Arts and Humanities approach for a better understanding of the role that data and information play in cultural institutions.

At this very initial stage of our project we are looking at various datasets held at the BL and are thinking on how to represent massive volume of information into a meaningful and interactive artistic expression able to translate to the general public the rich and diverse universe of information produced by the Library.

By  Aquiles Alencar-Brayner and Richard Wright