This is a guest post by Sarah Cole, the British Library’s current Creative Entrepreneur-in-Residence.

Poetic Places is a free app for iOS and Android devices and the main outcome of my work as Creative Entrepreneur-in-Residence at the British Library, funded by CreativeWorks London.

Poetic Places brings poetic depictions of places into the everyday world, helping you to encounter poems and literature in the locations described, accompanied by audiovisual materials drawn from archive collections.

Utilising geolocation services and push notifications, Poetic Places can let you know when you stumble across a place depicted in verse. Alternatively, you can browse the poems and places as a source of inspiration without travelling to them.

Poetic Places aspires to give a renewed sense of place, to bring together writings and paintings and sounds to mean more than they do alone, and to bring literature into your everyday life in unexpected moments.

We launched the app on 18 March 2016 and celebrated with a half-day event at the British Library. I talked about the aims and development of Poetic Places before our five other speakers spoke about their work and ideas in the fields of Literary Geographies, location-aware apps, and cultural heritage.

All of the speakers were very interesting and have given me more food for thought as I consider ways in which to expand Poetic Places. I’m grateful to them for taking the time to come and talk to us all. 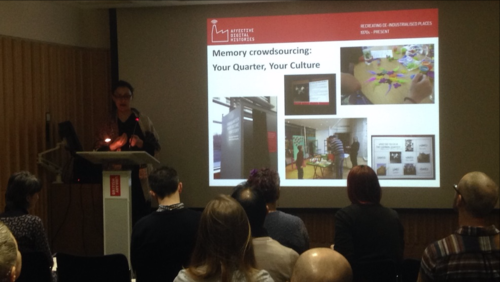 After the conference section of the day a few of us went on a brief walk to Euston via Bloomsbury to try out Poetic Places in action. This was largely successful, though the various Apple and Android devices had quite different sensitivities to the GPS triggers! I may have to tweak the GPS, but it was great to be able to try it out with a group of people and talk about both the technical aspects, the development process, and my curatorial choices. 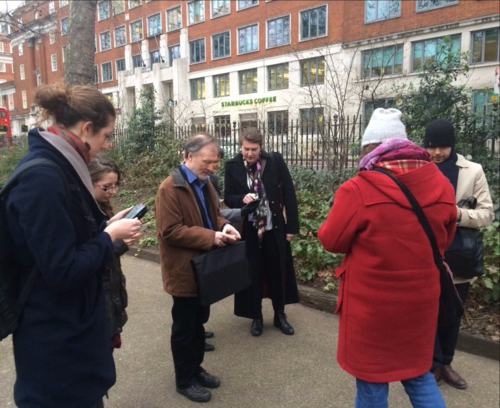 On the Poetic Places walk, image by Dr David Cooper

We’ve already had positive feedback about the app, which is really great, and a few suggestions for poems we should consider including going forward, which is also great because I do intend to go forward.

Poetic Places has been released into the wild, but there’s still a lot of scope for growth. The first, and most obvious step, is to start including materials from outside of London; we limited the launch content to London for several reasons but I’m determined to expand its coverage to the rest of the UK and beyond. I also hope to bring in more contemporary materials. I’ve very much enjoyed working with out-of-copyright literature and showcasing Open collections (such as the British Library Flickr collection) but it’d be good to include more recent works. Audio, too, was out of scope for this pilot stage of Poetic Places, but I think this could be a popular feature in the future.

I’m going to pause before ploughing on with all of this, because I want to write up more of the development and choices that have shaped Poetic Places so far, but I’m enthused with ideas for Poetic Places to grow and inspire people.