A Calendar Page for January

Calendars with illuminations and other miniatures are often found in manuscripts from the medieval era, and particularly in Books of Hours or other texts intended for individual owners. Most of these calendars are headed by an illuminated 'KL,' for 'Kalendae,' or the first day of the month according to the Roman system, from which we derive the word 'calendar.'  The 'KL' heading is usually followed by a list of important church feasts or saints' days, laid out according to this same system of Roman reckoning.

The most significant feasts or celebrations are often written in gold or red ink (hence the phrase 'red letter days'). By examining which saints or observances are designated on an individual calendar (for example, the dedication of a particular church on a particular day), scholars can often determine the destination, or 'use,' of an unknown manuscript.

Along with listing these important dates, many medieval calendars (particularly later ones) include a miniature of the relevant sign of the zodiac, as well as a scene of the 'labour of the month.'  These 'labours' were fairly standardised, and would have been instantly recognisable to a medieval audience, although they can often require a bit of explanation for the readers of today. Each month depicts a different endeavor appropriate to that particular time of year, and these images are often some of the best evidence of the work and leisure activities of the non-nobility.

An excellent illustration of a medieval calendar can be found in the British Library's 'Isabella Breviary' (Add MS 18851) created for Queen Isabella of Castile (b. 1451, d. 1504).  A breviary is a book of prayers, hymns, and other readings designed to be read daily in accordance with the canonical hours. This magnificent example was produced in the late 1480s in Bruges, with illustrations by a number of prominent artists of the time.  We will be posting this calendar cycle throughout the year, beginning with January (below): look out for each month's folio! 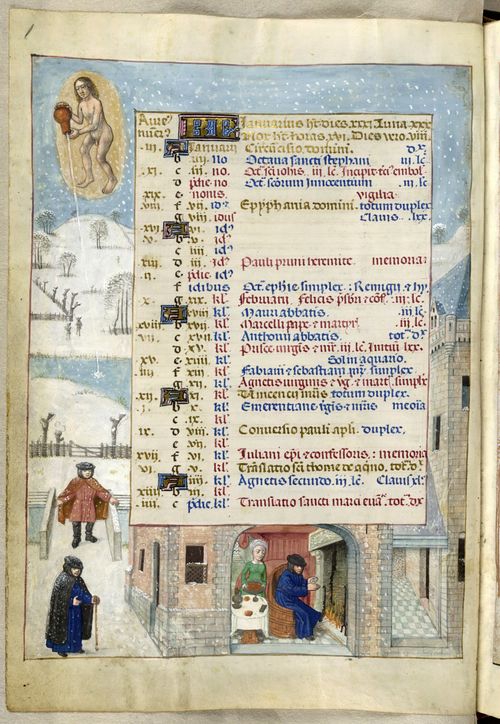 This page for January shows the zodiac sign for Aquarius in the upper left, depicted as a nude man with a pitcher of water (which, rather charmingly, is being poured into the river in the landscape below). He is surrounded by a winter scene, with bundled people walking through the snowy fields towards a welcoming house. In the lower margin is a scene that combines two of the most common (and most pleasant) 'labours' for January: feasting, and warming oneself by the fire.

This manuscript is highly interesting for astrology research. Did those artists in the 1480s use a siderial or a tropical zodiac? And would there by any indication whether the Aquarius sign is to be applied for the full month or whether it would start on a certain day of the month?

This manuscript is highly interesting for astrology research. Did those artists in the 1480s use a siderial or a tropical zodiac? And would there by any indication whether the Aquarius sign is to be applied for the full month or whether it would start on a certain day of the month?

Your link to the January page is broken, and previous versions each month seem broken too. Please change to:

Thanks very much for your comment about the broken links; these have been repaired. Please do let us know if you find any more! Best, SJB