The British Library has recently acquired a unique medieval prayer roll that once belonged to Henry VIII, and contains one of only three surviving examples of his handwriting from before his accession in 1509. Produced in England in the late 15th century, it is one of the finest English prayer rolls, and consists of four parchment strips sewn end to end that measure some four metres long when fully unrolled. The roll contains thirteen illuminations -- images of Christ, focusing on the Passion, its Instruments and the Sacred Blood, as well as depictions of various saints and their martyrdoms. Accompanying these are prayers in Latin and rubrics (religious instructions) in English. The rubrics promise that the recital of certain of the prayers will offer safety from physical danger, sickness or disease; others will shorten, by specified amounts, the agony of Purgatory, while the placing of the roll on the belly of a woman in labour will ensure a safe childbirth. 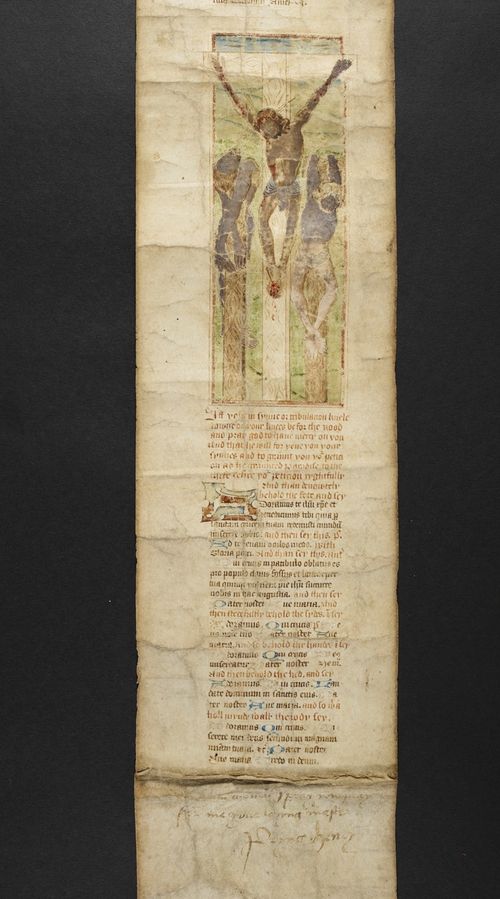 The prayer roll was once owned and used by Prince Henry, evidenced by the inclusion of his royal badges at the head of the roll. These include two Tudor roses, the Prince of Wales crowned ostrich feather, as well as Katherine of Aragon's personal symbol of the arrow-sheaf of Aragon. At some point prior to 1509 Henry presented the roll to William Thomas, a Gentleman of his Privy Chamber, and added an inscription at the top of the second membrane, under the central image of Christ's Passion: 'Wylliam thomas I pray yow pray for me your lovyng master Prynce Henry'.

The Henry VIII Prayer Roll is now London, British Library, MS Additional 88929. It is currently on display in our Sir John Ritblat Gallery: Treasures of the British Library, and will also be displayed in our Royal exhibition which opens in November 2011.