In February 1477, Margery Brews, a Norfolk gentlewoman, sent her beloved John Paston two Valentine letters. They were written on the eve of their marriage and, besides expressing Margery's undying love for John, reveal the couple's concerns for their future.

The first letter is on display until 3 April 2011 in the British Library's Evolving English exhibition. The second, reproduced here, was written in reply to John's response. Margery confides that her father is unable to provide as substantial a dowry as they had expected, "weche causyth myn herte to be full hevy". She continues, "yf that ye cowde be content wyth that good [the sum of 100 pounds and 50 marks] and my por persone, I wold be the meryest mayden on grounde [on earth]." The letter (written on Margery's behalf by Thomas Kela, a clerk of Sir Thomas Brews), is signed 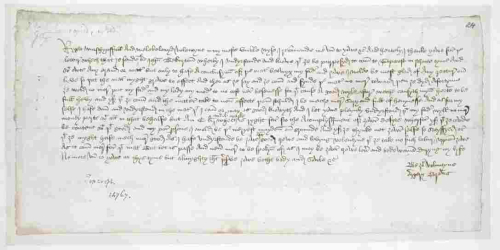 Posted by Ancient, Medieval, and Early Modern Manuscripts at 8:45 AM