Changes in the Treasures Gallery

In one display case are three examples of medieval Bible picture books, manuscripts that offer (as the name suggests) substantial illuminations to illustrate Biblical stories.  These were often created for the laity or for use as teaching aids.

The Holkham Bible Picture Book (Add MS 47682) is one such example.  Commissioned by a Dominican friar and produced in England in the 2nd quarter of the 14th century, it is filled with large-scale painted miniatures of Biblical scenes.  The text that accompanies and explains these miniatures is in French, the language of the upper class of England at that time, implying that it may have been intended as an instructional tool for the aristocracy. 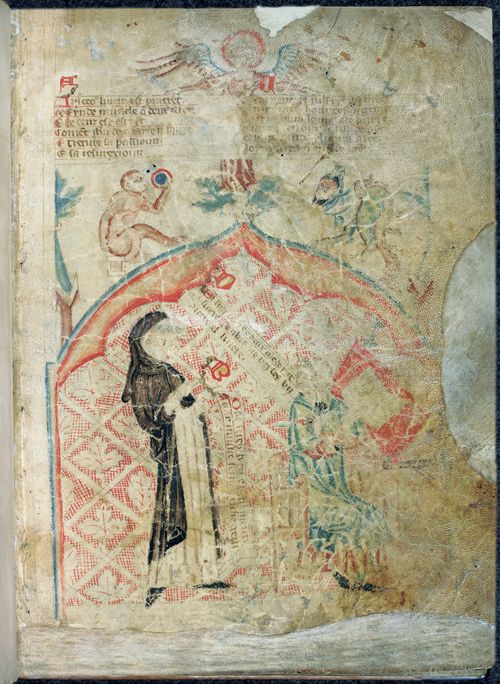 The first folio of the Holkham Bible Picture Book gives us a hint of this story.  In the miniature, a Dominican friar can be seen on the left, addressing the seated artist at work.  The friar is 'speaking' to the scribe or artist, holding a scroll that reads, 'Ore feres bien e nettement car mustre serra a riche gent.' (Translation: 'Now, do it well and thoroughly, for it will be shown to important people.')  The scribe or artist responds, 'Si frai voyre, e Deux me doynt vivre, Unkes ne veyses un autretel livre.' (Translation: 'So I will, and if God grant me life, you will never see a better book than mine.')

Along with the Holkham Bible Picture Book are two additional examples of the genre.  The Egerton Genesis (Egerton MS 1894) was also produced in England, in the 3rd quarter of the 14th century, and contains images of scenes from the book of Genesis, with explanatory text in medieval French.  (Further information and images of this manuscript can be found here, in our online Catalogue of Illuminated Manuscripts.)  The Genesis Picture Book (Add MS 39657), is a later example of this kind of manuscript, produced in the last quarter of the 15th century, in eastern France or the Southern Netherlands. It contains coloured line-drawings and text handwritten on paper, rather than parchment.

The second display case in this section of our Treasures Gallery contains three variations on the bestiary, or book of beasts, an enormously popular text in the 12th and 13th centuries.  A bestiary is in essence a catalogue of various animals, combining practical information about them with explanations of their moral and allegorical properties. But the 'deeper' meanings assigned to these animals can vary enormously from text to text.  For instance, the peacock, the animal shown in all the current display openings, is described by Hugh of Fouilloy in his Aviarium and Bestiary as having flesh so tough that it cannot be consumed by fire.  Hugh extrapolates that a good teacher should be like the peacock, with a mind so strengthened by learning that it will not be destroyed by the flames of lust.  (Sloane MS 278, Hugh of Fouilloy, Aviarium and Bestiary, France, c. 1325 - c. 1375; for more details, see here). 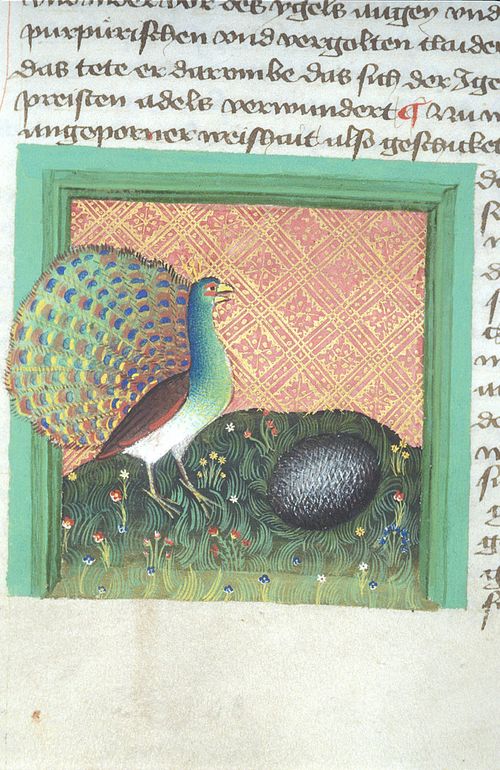 Detail of a miniature of a peacock being reproved by a hedgehog for vanity, Egerton 1121, f. 74, Ulrich von Pottenstein's Spiegel der Weisheit, Austria, W. (Salzburg), c. 1430

By contrast, the peacock is seen as a symbol of pride and arrogance in Ulrich von Pottenstein's Spiegel der Weisheit (Mirror of Wisdom), a later medieval text that combines information from the bestiary tradition with Aesop's Fables to tell moral stories about various animals. (Egerton MS 1121, from Austria (Salzburg), c. 1430; for more details, see here).  In the miniature above, the peacock is being chastised for his vanity by a hedgehog, a symbol of humility. 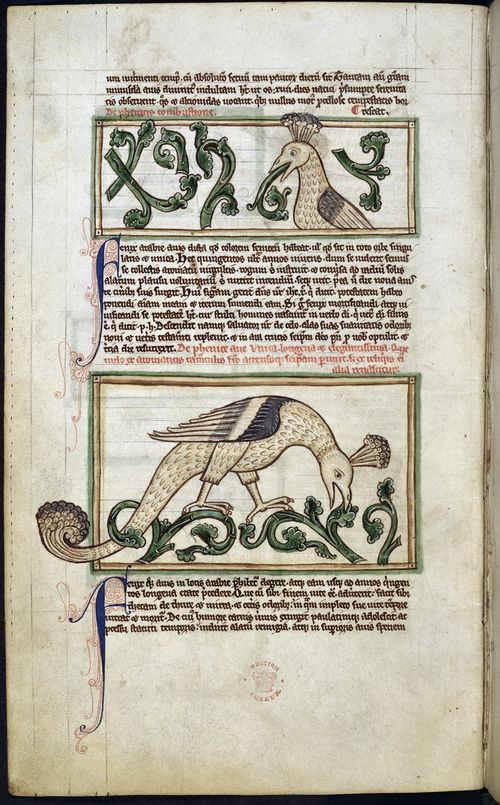 The peacock also serves as an allegorical symbol (albeit obliquely) in Peraldus' Summa de Vitiis, a compilation volume that contains a number of texts dedicated to the art of preaching. (Harley MS 3244, from England, after c. 1236; for more details, see here.)  Interestingly, a bestiary is included as well, indicating how animals could be used as allegorical tools in sermons.  The text in the miniature above describes the phoenix, the mythical bird said to have been reborn from the ashes, but the artist has chosen to illustrate this section with miniatures of a bird most closely resembling a peacock.

Posted by Ancient, Medieval, and Early Modern Manuscripts at 10:51 AM