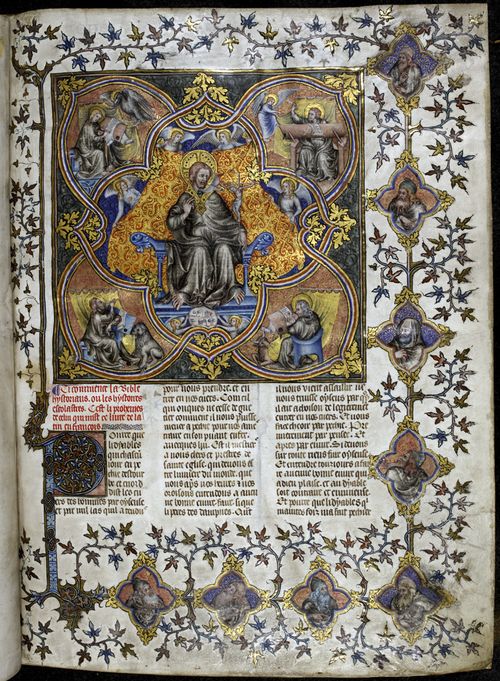 Miniature of the Trinity surrounded by the symbols of the Four Evangelists, Royal MS 17 E VII, Vol I, f. 1

Most biblical texts in the medieval period were written in Latin.  However, English and European nobility also owned translations of the Bible into French, the first language of the English court until the late fifteenth century.  The most common version of the Bible in French is known as the Bible historiale or history Bible, because it combines sections of the Latin Vulgate with commentary or gloss interpreting the biblical text and interweaves other events from history or mythology chronologically.  This work of translation and interpolation was based largely on the earlier Historia scholastica by Peter Comestor (d. c. 1178), and was completed in 1295 by a canon of Saint Pierre d'Aire-sur-la-Lys, in the Pas de Calais, Guyart des Moulins.

The work was long and many copies, like this one, were bound in two volumes. Befitting the status of their intended owners and the purpose of a historicised Bible for laymen, they were also abundantly illustrated.  Typically each book begins with an illustration.  This deluxe copy follows that pattern, but is unique in the choice of image to open the volume.  Rather than a scene of Creation, as might seem appropriate for the beginning of the Bible, instead this manuscript opens with the Trinity surrounded by the symbols of the Four Evangelists, reflecting perhaps a more synthesized view of the overall message of the text.  The illustrations were painted by the Master of the Bible of Jean de Sy, who worked for Charles V of France (1364 - 1380), and it seems likely that this book was made for the French king.

what a fantastic pieace of work, created under candle light and daylight by the monks of the past.

A right treasure in our Liberies.

A weath of fantastic details and the colours exceptional> from the past to the now, we should rejoice in those poor monks life works and maybe we should dedicate a british stamp to all these treasures.