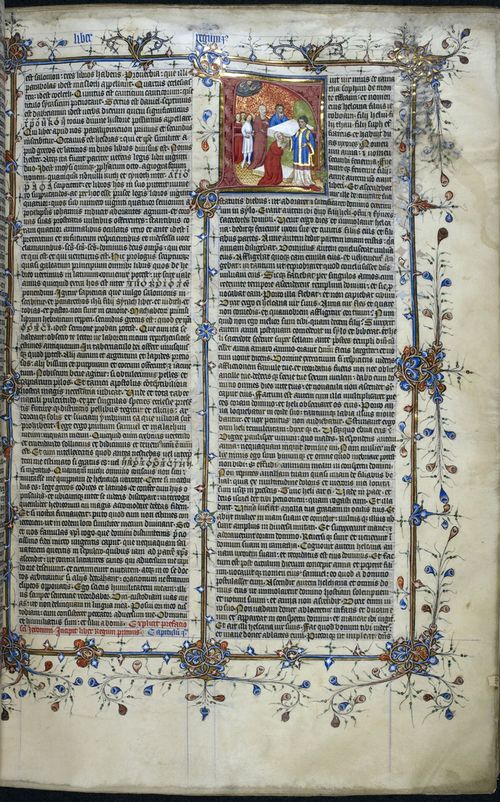 Miniature of Hannah at prayer blessed by the high priest Eli, and Elkanah accompanied by Peninah and a group of their children, Royal MS 1 E IX, f. 64

At a massive 630 mm tall, this ‘Great Bible’ is the largest book in the upcoming Royal exhibition, and one of the biggest manuscripts in the Old Royal Library and the British Library.  It is also the only manuscript in the Royal collection associated with Henry IV.  Its title of the ‘Great’ or ‘Big’ Bible comes from a reference in an inventory of books made at Richmond Palace in 1535, which refers to a Biblia magna (Great or Big Bible), and to a further reference of a magna Biblia in Henry V’s will, as a Bible that had been owned by his father, Henry IV.  Its huge size may indicate that it was used for readings in the royal chapel, rather than as a Bible for private study.

The Great Bible is also one of a very few extensively illustrated English biblical manuscripts to survive from the late Middle Ages.  Each book opens with a historiated (or pictorial) initial and the prologues to biblical books include images of St Jerome, the translator of the Bible into Latin.  For example, at the beginning of 1 Kings (1 Samuel in modern Protestant Bibles) Elkanah appears at an altar with his two wives: the childless Hannah stands on her own on the right, while the fertile Peninah appears next to Elkanah with a line of children behind her.

Posted by Ancient, Medieval, and Early Modern Manuscripts at 12:44 PM

I hope to get the chance to visit.
We have an exhibition to commemorate the 400th anniversary of the publication of the King James Bible at the National Library of Wales, Aberystwyth at the moment. See the NLW Blog: http://nlwales.blogspot.com/2011/04/let-us-now-praise-famous-men-and-unsung.html

I just read for the first time about The Great Bible in the December issue of AWAKE magazine. I am currently teaching Contemporary Gothic Calligraphy and was so very excited to see the Gothic script in these images of The Great Bible. Thank you so very much for making it accessible to the masses!! The illumination and miniature art work is AMAZING!!!