Ever wondered what Beowulf sounds like in Dutch, Greek or Russian, or in Telugu, a Dravidian language spoken in parts of southern India? Here at the British Library we've had some fun creating the recordings found here, representing nine different modern languages.

Beowulf is perhaps the most famous Old English literary survival. An epic poem spanning more than 3,000 lines, Beowulf recounts the exploits of its eponymous hero and his combats with a monster named Grendel, with Grendel's revenge-seeking mother, and with a dragon guarding a hoard of treasure. Experts are divided as to when the poem was composed; but it is found in just a single medieval manuscript, most likely made in the early decades of the 11th century, and now housed at the British Library (Cotton MS. Vitellius A. XV).

We are indeed extremely fortunate that this manuscript has been preserved. It was damaged by fire in 1731, when the Cotton collection was housed at the aptly-named Ashburnham House in London; the Beowulf-manuscript can only be handled with the greatest care. 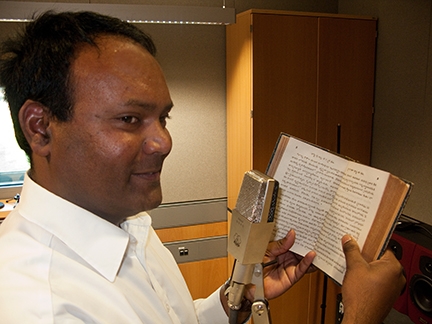 We are extremely grateful to all our readers (Marja Kingma, Karen Eeckman, Juan Garces, Dimitrios Skrekas, Ildiko Wollner, Laura Nuvoloni, Yasuyo Ohtsuka, Irina Lester and Madhava Turumella), and to Nigel Bewley of the British Library's Sound and Vision for making the recordings.

I think this is great fun, I think everyone is reading the first 25 lines. I would have really liked the modern and Old English too (and the text in Old English).

Cool to hear the Russian version! Sadly, its author, the Russian genius of a translator, Mr. Vladimir Tikhomirov, who also translated Elder Edda and Rigveda, passed away earlier this year (July 12, 1943 - April 19, 2011) and cannot hear that.

Great Voice Madhava Garu. Hats of to you to taking up a great work of spreading the importance of Telugu language.

Nice to hear our Telugu version. Its really keeps our Telugu people so happy to hear our language in British Library. Nice translations.
Thanks for all the Members who has provided this.
Keep it up.