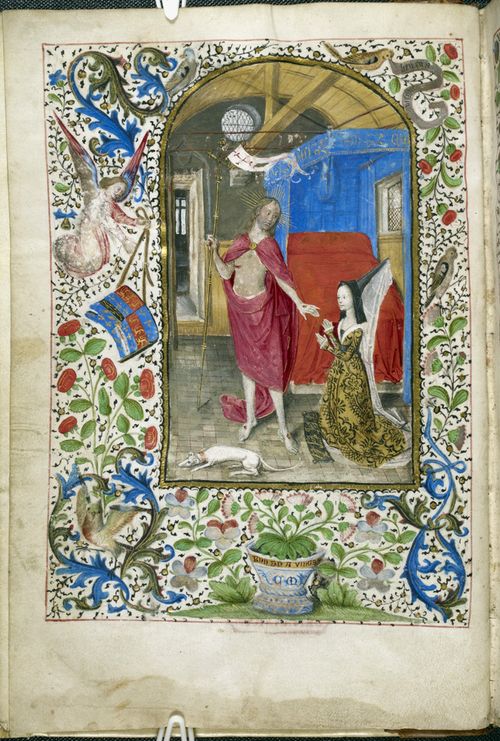 Miniature of Margaret of York before the resurrected Christ, Additional 7970, f. 1v

The present manuscript is a unique copy of a devotional text written for Margaret of York (b. 1446, d. 1503), the sister of Edward IV.  Her marriage in 1468 to Charles the Bold (1467 - 1477), Duke of Burgundy, one of the richest men in Europe, was one of the most stylistic ceremonies of the century and the artistic and other fashions of the Burgundian court proved highly influential in the Lancastrian court.  As Duchess, Margaret commissioned the work from her almoner, or chaplain, Nicolas Finet.  The result was the Dialogue de la duchesse de Bourgogne à Jesus Christ, a deeply personalised text in which Margaret receives instruction directly from Christ and is urged to contemplate his living presence.

The work is personalised still further with an image of the Duchess herself in her private chamber experiencing a vision of Christ.  In composition this image is similar to the familiar Noli me tangere scenes of Christ appearing to Mary Magdalene; perhaps the Duchess was being encouraged to emulate the piety of other holy women such as the Madgalene.  Margaret’s arms as Duchess of Burgundy appear in the lower border, together her device Ben en aviegne (May good come of it) and her initial entwined with that of her husband Charles’s.  Like other Books of Hours, this manuscript may never have been part of a royal or ducal library.  A year before her death Margaret gave the manuscript to her friend and lady-in-waiting Jeanne de Hallewin (d. 1529), Lady of Wassenaer, and recorded this gift in an autograph dedication at the end of the volume.