John Lydgate, The Lives of Saints Edmund and Fremund 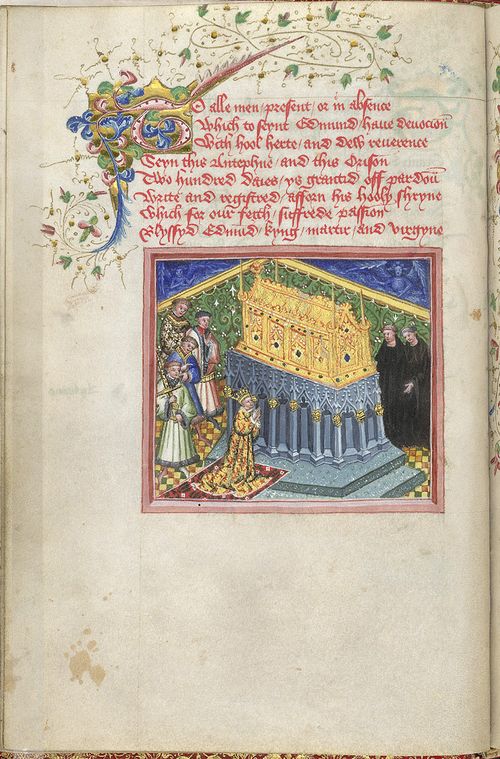 In 1433 the young King Henry VI (just eleven years old) spent Christmas through Easter at the abbey of Bury St Edmunds.  In honour of the visit the abbot William Curteys commissioned an English version of the Life of the abbey’s patron saint from one of the abbey’s monks, the author and poet John Lydgate (b. c.1370, d. 1449/50?).  Lydgate combined the story of Edmund’s life with that of a more obscure saint, Fremund, supposedly Edmund’s nephew.  This lavish and heavily illustrated copy of the text — it has 118 painted illustrations — was probably written under Lydgate’s direct supervision at the abbey as a presentation copy for the King.  It is one of only a few surviving copies of the Life, and the most copiously illustrated.  The image pictured here is that of the kneeling King before the shrine of St Edmund at the abbey.  Although the shrine has since disappeared, in design it appears very similar to that of Edward the Confessor, still beyond the high altar in Westminster abbey today.

Henry VI developed a reputation for piety and poverty — qualities not necessarily viewed as appropriate for a king.  He was criticised in his own time for failing to dress with suitable magnificence, and for excessive generosity.  This impressive manuscript may have been one of his gifts: a later inscription shows that it came into the possession of John Touchet (d. 1559), 8th Baron Audley, who apparently returned it to the Old Royal Library as a gift to Henry VIII, perhaps in thanks for the restoration of his titles in 1512.