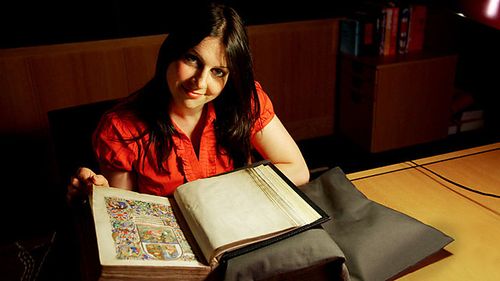 Dozens of medieval manuscripts from the Royal and other British Library collections will be featured in a television series to air on BBC Four, beginning next week.  Presented by art historian Dr Janina Ramirez, Illuminations: The Private Lives of Medieval Kings is a three-part series examining in detail what these manuscript treasures can reveal about the hidden lives of England's monarchs.

The series was produced as part of The British Library's ongoing collaboration with the BBC, and in conjunction with our exhibition of manuscripts from the Royal collection.  Many of the manuscripts featured have never before appeared on film (a few of our curatorial team will be making their television debuts as well).

Dr Scot McKendrick, Head of History and Classics at the British Library, served as a series consultant on the programmes. He says, 'There is no doubt that this collection held by the British Library provides us all with unique opportunities to explore in-depth the lives of our kings from the medieval period.  The beauty and ingenuity of these manuscripts, that have stood the test of time, also tells us a great deal about a relatively forgotten period of our history. We are delighted to be telling this fascinating story through the British Library's exhibition and through this mesmerising series with BBC Four.'

The first episode, called Ruling by the Book, will air on BBC Four on Monday 9 January at 21:00, and will also be available after the broadcast on BBC iPlayer.

Further information is available from the British Library's press release, and there is also a review of the programme in the Daily Mail.  This review ends with a reference to the long-running debate over whether or not gloves should be worn by curators handling illuminated manuscripts, a topic previously discussed in our blog.

Wonderful! This is a lovely Happy New Year present - thanks, British Library! I will definitely be watching.

Excellent programme. We live in Malmesbury and are extremely interested in anything to do with King Athelstan. We also appreciate the work and artistry that went into these beautiful books. We belong to the Warden and Freemen who King Athelstan gave land to in Malmesbury.

An excellent series,enthralling, captivating and so well researched.
I thoroughly enjoyed every moment.
I would like to buy a DVD so that I can watch it over and over again. So much to learn----even aged 81!
When will the DVD be released?

Dear Mr Granville-Edmunds,
Thank you very much for your comment here, and we are pleased to tell you that the DVD of Illuminations is now available. You can purchase a copy from the British Library shop; here is a hyperlink: http://shop.bl.uk/mall/productpage.cfm/BritishLibrary/ISBN_9786000018740
We hope you enjoy it!
Sarah J Biggs