A Book of Two Princes Miniature of Henry VI / Dauphin Louis with St Louis before the Virgin & Child, from the Psalter of Henry VI, Paris, c. 1405-10 (with later additions), Cotton Domitian A. xvii, f. 50

This justly famous image is from a deluxe Psalter that served as both a French and an English royal book.  The manuscript is suitably grand - almost every page is ornamented with a border of gold ivy leaves, and it is decorated by a series of large illustrations in the most fashionable style of the period (some of which can be seen at the bottom).  These paintings include six of a young boy engaged in devout prayer before the Virgin and the Christ Child.  At the beginning of Psalm 26 (above) this boy is accompanied by St Louis, while in another he is attended by St Catherine.

Since he is wearing a crown and is accompanied by the arms of England and France, the prince in these miniatures is often identified as the young Henry VI (r. 1422-61 & 1470-71).  However, the arms of England were a later addition to the manuscript.  Given his apparent age, royal status, and his attendance by St Louis, it is rather more likely that this boy is in fact the Dauphin Louis, Duke of Guyenne (b. 1397, d. 1415).  In around 1405-10 Louis's mother, Isabel of Bavaria, is recorded as having devotional manuscripts made for her other children.  This opulent book may also have been commissioned by the Queen as a very personalised devotional book for her young son.

The circumstances and timing of the modification of the royal arms (which took place at the same time as the addition of several other illuminations) is unclear.  One possibility is that the Psalter was acquired by Louis's sister, Catherine of France, who married Henry V in 1420.  Perhaps Catherine had the luxurious book modified for her own young son, Henry VI. 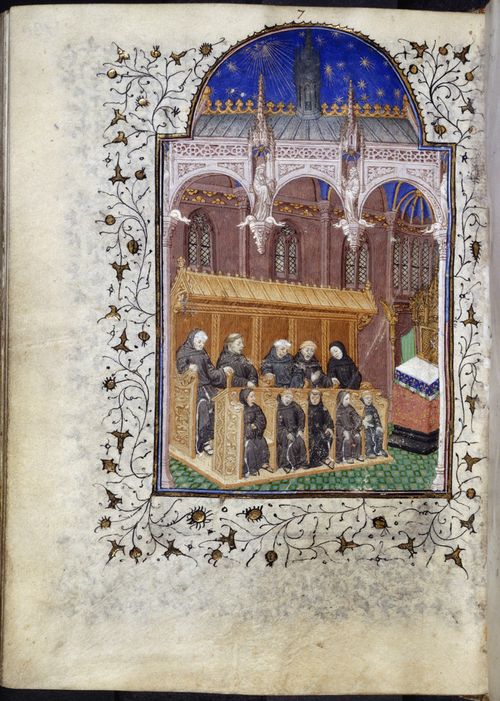 Miniature of Christ and his Apostles in a ship during a storm at sea, from the Psalter of Henry VI, Paris, c. 1405-10 (with later additions), Cotton Domitian A. xvii, f. 123

The Psalter of Henry VI (or perhaps it should be called the Psalter of 'Henry VI') is currently on display in the exhibition Royal Manuscripts: The Genius of Illumination.  The exhibition closes on 13 March, so plan your visit soon!