Excitement is building for the London 2012 Olympic Games, which will begin in just over four months (27 July – 12 August 2012, with the Paralympic Games from 29 August to 9 September).  It will be a busy summer for London (a masterful understatement!) and everyone is preparing for the deluge of visitors – including the British Library.  The crowds that will travel through St Pancras station on their way to various Olympic events may not realise, but the British Library holds a wealth of items relating to the history of sport and the Olympic games, and over the coming months we will be highlighting a number of our treasures. 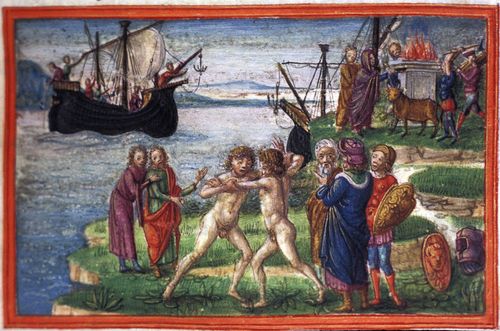 Detail of a miniature of Entellus and Dares wrestling in the nude, with ships weighing anchor behind and the sacrifice of a bull on the shore of Actium, at the beginning of book III of Virgil's Aeneid, Italy (Rome), between 1483 and 1485, King's 24, f. 88

The first such is a manuscript that features an episode of the so-called ‘Sicilian Games’ – a ceremonial competition closely related to the Olympics and described in one of the great epics of western history, the Aeneid.   This manuscript, called the King’s Virgil (King’s 24, from the collection of King George III), was created between 1483 and 1485 in Rome for Ludovico Agnelli, the bishop of Cosenza. It is lavishly illuminated, and contains several texts from Ovid as well as the Aeneid.

Virgil’s Aeneid recounts the story of Aeneas, the legendary ancestor of the kings of ancient Rome. Aeneas, like so many heroic figures in mythology, was part-human and part-divine; he was said to have been the son of Prince Anchises and the goddess Aphrodite.  He features in the Iliad as an ally of Troy, and was one of the few Trojans to survive the fall of the city.  With the help of the gods, Aeneas and his crew (which included his father, son, and a group of warriors) succeeded in escaping the slaughter.

The Aeneads took to the sea, eventually arriving in the kingdom of the Latins after years of wandering. They made several stops along the way – perhaps most famously in the kingdom of Carthage (where Aeneas engaged in a disastrous affair with queen Dido which was the source of unending enmity between the cities of Rome and Carthage). Most importantly for our purposes, though, was the Aeneads’ sojourn on the island of Sicily, where Aeneas’s father Anchises died peacefully.  In honour of his father, Aeneas announced a series of contests for his men, including a boat race, running, wrestling with staffs, archery, and javelin throwing. 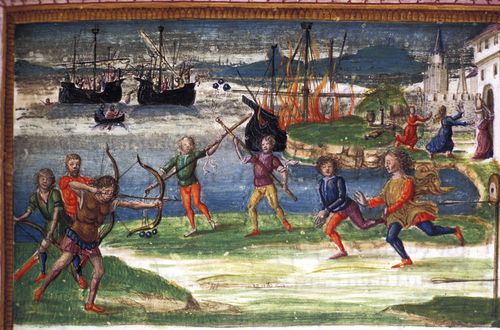 Detail of a miniature of the Sicilian games, including a boat race, archery, wrestling with staffs, and racing, and in the background,  the burning of the Trojan fleet, at the beginning of book V of Virgil's Aeneid, Italy (Rome), between 1483 and 1485, King's 24, f. 115

These kinds of competitions (particularly running and wrestling) featured in the earliest Olympic games.  Those lucky enough to have tickets for London 2012 will be able to see very similar events, although without, one hopes, the Trojan fleet burning in the background.