The Theodore Psalter (British Library Additional MS 19352) is one of the most famous illuminated manuscripts to survive from the Byzantine Empire. Completed in Constantinople in February 1066, the Psalter consists of 208 folios which include 440 separate images, making it the most fully illuminated Psalter to come down from Byzantium. It is undeniably one of the greatest treasures of Byzantine manuscript production and of supreme importance for our understanding of Byzantine art.

Two centuries before its production, the iconoclastic movement had been defeated, making representational art obligatory for divine worship. From that time onwards the art of icons once again flourished. It is within this context that the Theodore Psalter should be understood.

The Psalter contains 151 Psalms (ff. 1-189), a twelve-syllable poem on David’s early life in the form of a liturgical drama, in dialogue, based on Psalm 151 (ff. 189v-191), a prayer offered on behalf of Abbot Michael (ff. 191v–192), the Canticles (ff. 192v–208), as well as a dedication and colophon (f. 207v and f. 208). The Psalms and the Canticles are numbered next to their titles and the Psalm text is divided between kathismata and staseis, according to liturgical practice. A plethora of initial letters is ornamented. 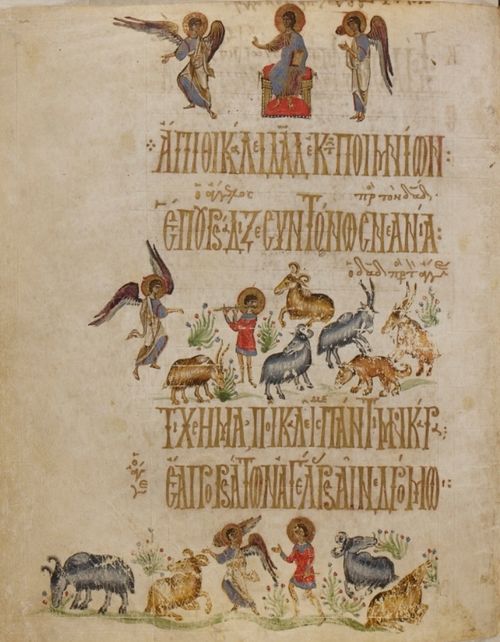 “This volume of the divine Psalms was finished in the month of February of the fourth indiction of the year 6574 [i.e., 1066], in accordance with the order of the divinely inspired father and synkellos Michael, abbot of the all-holy and all good famed monastery.” Although the name of the monastery is lost, we have strong evidence from the manuscript that it was the Stoudios Monastery in Constantinople. The colophon continues as follows: “Written by hand and written (ornamented) in gold by the hand of Theodore the priest of the same monastery and scribe from Caesarea, for which the glorious and brilliant Basil has appeared as shepherd and luminary, (Basil) who was indeed great and was named so. To Christ the King does all the glory and the power belong!’’ 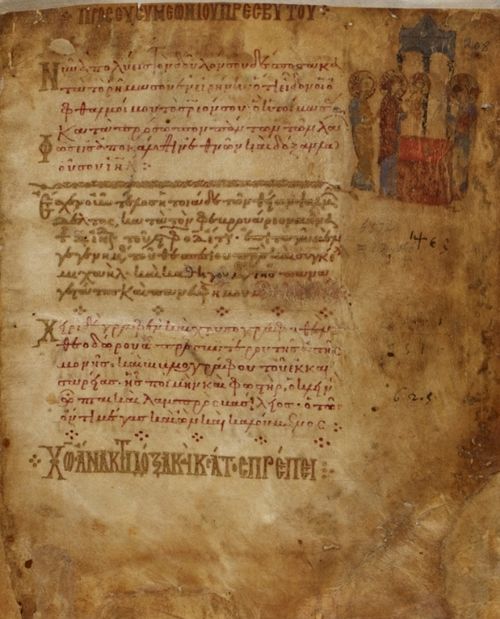 This colophon text reveals two names related to the production of the manuscript. The first is Theodore from Caesarea, monk and presbyter (Θεόδωρος [ἐκ Καισαρείας]: E. Gamillscheg & D. Harlfinger, Repertorium der griechischen Kopisten 800-1600, 1: Grossbritannien, 3 vols, Vienna 1981, 1A, no 131), who styles himself as both cleric and scribe (βιβλιογράφου) of the monastery. His role in the production of the codex is twofold: he not only wrote the text (γραφέν) but he ornamented this manuscript in gold (χρυσογραφηθέν). The other name is that of the abbot of the monastery, Michael, who is described with formulaic monastic titles, namely as the "divinely inspired (θεσπεσίου) father and synkellos" of the monastery. Unfortunately we know nothing about this abbot, except that it was he who commissioned this Psalter. 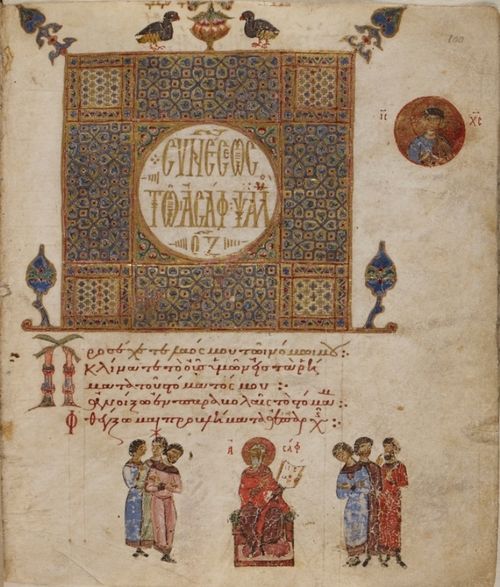 The Theodore Psalter has been digitised in full as part of the British Library’s Greek Manuscripts Digitisation Project, funded by the Stavros Niarchos Foundation, and can be viewed on our Digitised Manuscripts site.