The Haggadah (plural Haggadot) is a service book read during Seder, a ritual feast which takes place on the eve of Passover to commemorate and reenact the Exodus of the Israelites from Egypt. Haggadot produced in the Middle Ages were often richly illuminated. Besides biblical and midrashic images which depict episodes from the Books of Genesis and Exodus, these service books were also illustrated with scenes of ritual connected to the liturgy of the Seder feast. They illustrate certain important moments in the service, providing visual aids for the participants in the ceremony. 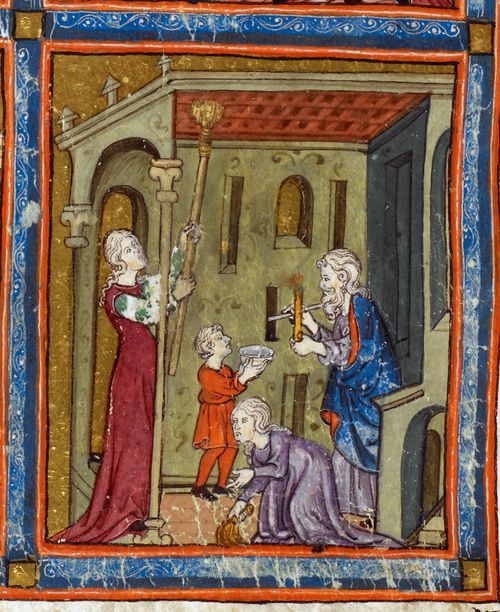 Detail of a miniature of the cleaning of the house, from the Golden Haggadah, Spain (Catalonia), second quarter of 14th century, Additional 27210, f. 15

In most of the Sephardi Haggadot produced in the fourteenth century, ritual scenes are placed at the end of the picture cycle preceding the text itself. ‘No leaven shall be found in your houses,’ says the Bible (Ex. 12:19). Later rabbinical sources give prompt instructions about how to search for leaven. In the Golden Haggadah, a diligent family with excellent skills of cooperation is depicted cleaning the house from tip to toe and searching for the hametz (leaven) by candle light.

Utensils in which leaven has been cooked must be cleansed before Passover. In the Golden Haggadah, a man is shown putting dishes into a cauldron full of boiling water in order to cleanse them. Behind him, those with strong nerves can take a look at the process of preparing Passover lambs. 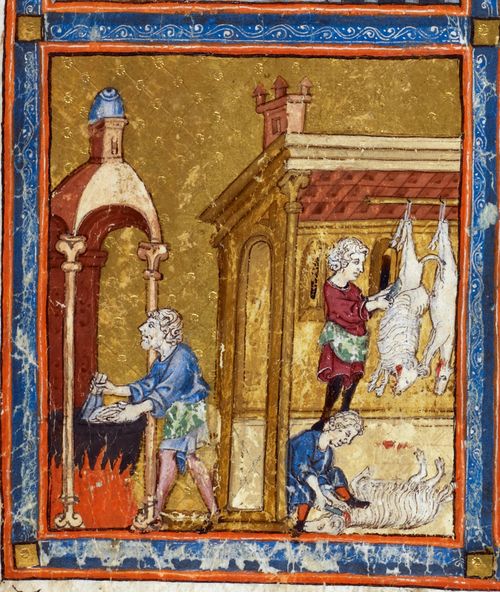 Detail of a miniature of the slaughtering of the Passover lambs and cleansing dishes (hagalat kelim), from the Golden Haggadah, Spain (Catalonia), second quarter of 14th century, Additional 27210, f. 15

In Ashkenazi Haggadot, the illustrations are usually placed in the margins of the text pages. In the late thirteenth-century North French Miscellany, the beginning of the Haggadah is depicted with celebrants seated around a spread table. During the Seder feast four cups of wine should be consumed. In the miniature, the largest figure (the head of the family) lifts the first cup of wine, while the others are engaged in a discussion about the Exodus. 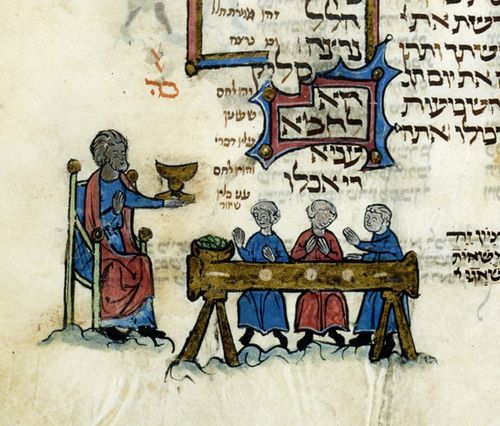 Detail of a ritual illustration of celebrants around a Seder table with the master of the house lifting the first cup, at the beginning of the Haggadah, from the North French Miscellany, France (North), 1277-1286, Additional 11639, f. 205

The fourteenth-century Barcelona Haggadah portrays another moment of the Seder eve alongside this part of the text. Beneath the initial words is a miniature of a family by the Seder table, with the master of the house placing the basket of unleavened bread on the head of one of his children. Placing the basket over the head of the participants was a Sephardi custom and it was considered as a symbolic way to experience the Exodus of the Israelites from Egypt, carrying unleavened dough on their backs. 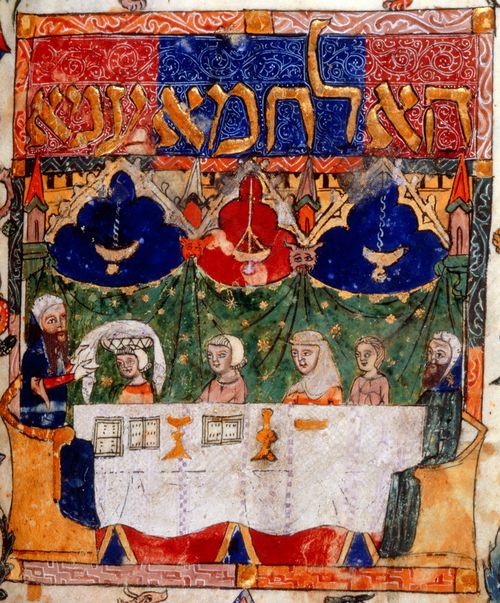 Detail of an historiated initial-word panel Ha lahma aniya (The Bread of Affliction), at the beginning of the text of the Haggadah, with a miniature beneath of a family by the Seder table with the master of the house placing the basket of unleavened bread on the head of one of his children, from the Barcelona Haggadah, Spain (Catalonia), c. 1340, Additional 14761, f. 28v

On those occasions when the close of the Shabbat coincides with the Passover eve, the Seder ritual must be slightly modified. The memonic YaKeNHaZ that aids to recall sequence of ritual, sounds similar to the German jag den Haas meaning 'hunt the hare.' Thus, in the Ashkenazi Haggadah, the mnemonic appeared in a visual form as a hare-hunting scene. 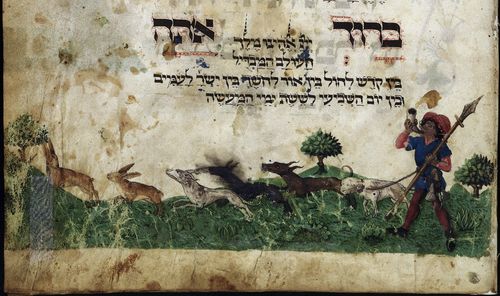 The artists of the Haggadot sometimes display a sense of humour. At certain points during the Seder ritual, foods having symbolic meanings have to be lifted. In the Brother Haggadah, the lifting of the bitter herb (maror), which is intended to symbolize the bitter fate of the Israelites in Egypt, is shown in two illustrations.  First, and most simply, the herb is depicted as a giant leaf flanked by two men. Beneath, a couple is seated at a spread Seder table with the husband pointing to his wife, saying, ‘This bitter herb.’ This gesture was certainly not a mandatory (or one hopes, even a common) element of the ritual, but rather the visual retort of this particular desperate husband. 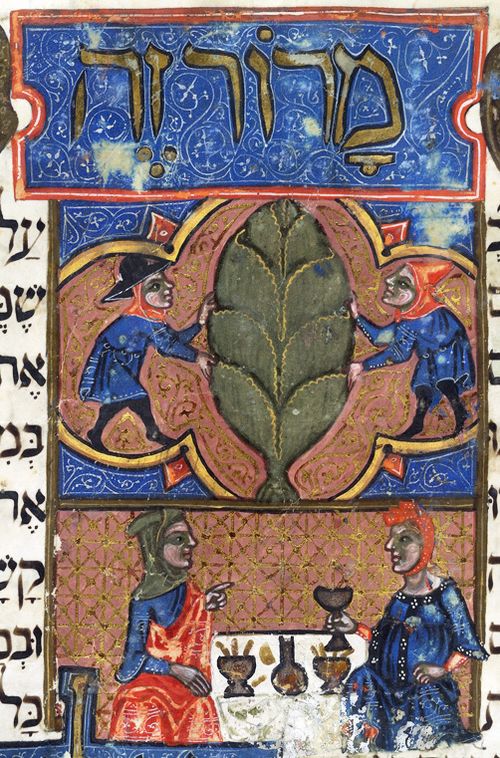 Detail of a miniature in two registers. Above is a giant leaf representing the maror flanked by two men. Below, a couple is seated at a spread Seder table with the husband pointing to his wife (indicating that she is the bitter herb), from the Brother Haggadah, Spain (Catalonia), third quarter of the 14th century, Or 1404, f. 18

thank you for this informative article, and sharing the lovely illuminations