Wrestling is pretty unusual among the sports at the Summer Olympics: it has two separate disciplines, Freestyle and Greco-Roman; while Greco-Roman Wrestling is the sole event in which only men compete (women contested Boxing for the first time in 2012). There is a subtle distinction between the two styles. In Greco-Roman Wrestling, holds below the waist are forbidden, resulting in a greater emphasis on throws, since a wrestler cannot attempt to trip their opponent. Freestyle Wrestling, as the name implies, gives the competitors more leeway into how to bring their fellow-contestant to the ground. The ultimate goal of both versions is to pin your opponent to the mat. Although the name "Greco-Roman" suggests a connection with the Classical past, it's now believed that this form of wrestling was developed by a Napoleonic soldier, Jean Exbrayat (hence another name for the sport, "French Wrestling"). In any case, wrestling is an ages-old pursuit, and not surprisingly it's depicted in many ancient books. Here are some examples for your delectation -- the question is, can you guess whether these are freestyle or Greco-Roman wrestlers? 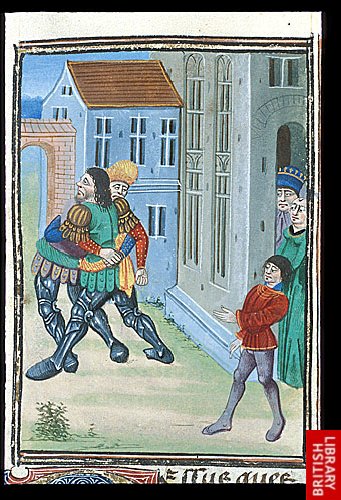 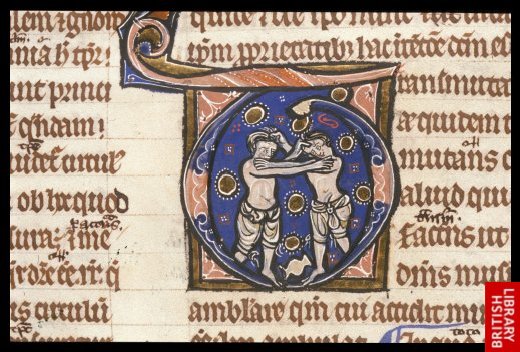 And here is perhaps the most famous wrestling match of them all, Jacob and the angel, depicted in two manuscripts from England and Catalonia (the famous Golden Haggadah). Wrestling fans out there -- can you spot any arm drags, bear hugs or headlocks? 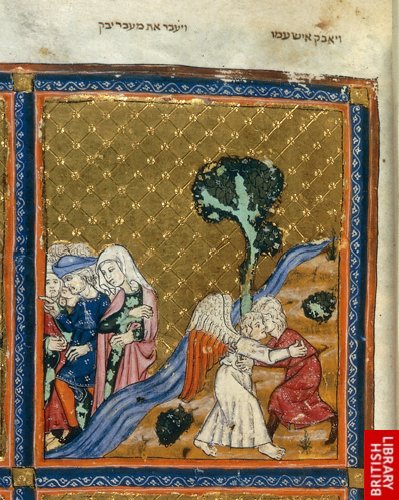 Thank you for spelling out the differences between freestyle and Greco-Roman wrestling: I had always assumed that in the latter one contestant dressed up as a Greek and his opponent as a Roman ;)

I am currently writing an article on Wrestling in Medieval England and would be happy to correspond with anyone interested in the subject.

I am currently trying to locate pictures of sculptures of Jacob wrestling the Angel from English, Irish and French churches or market crosses from the 6th century on.

Medieval English Wrestling is significantly different from modern wrestling. Modern wrestling is primarily "ground" wrestling.
Ground wrestling is a descendent of the Greek "pankration." Pankration was a type of freestyle fighting which permitted
upright fighting initially. But when the wrestlers fell to the ground, the fight did not stop. Instead the fight continued until one fighter gave up or died. A picture of pankration or ground wrestling can be seen in the famous statue "The Wrestlers (I lottitori)" found in the Uffizi Gallery in Florence, Italy.

Medieval English wrestling was "upright" wrestling. That is, when one wrestler fell to the ground, the fight (pull) was over. In all of the pictures of medieval wrestling, I have not found any example of wrestlers fighting on the ground.

There were perhaps six separate styles of wrestling in Medieval England.

The first examples we have are of what came to be known as "backhold' wrestling. An example of backhold wrestling can be seen in MS Royal 17 E 1V, f. 136r. The match begins with two men standing chest to chest and their arms gripped around the back of their opponent. As seen in this illustration both men have their heads resting on the right shoulder of their opponent. Their arms would be over lapped, with the left arm of each man over the right arm of the other. The basic object is for one man to squeeze the other in what would be called a "bearhug," as can be seen in this illustration, where Antaeas (Achelous), has lost his grip while he is being squeezed by Hercules. In current practice, anyone who lost his grip in backhold wrestling would lose. An alternative strategy was to seek to unbalance an opponent by forcing the right arm up under the left shoulder and throwing him to the ground.

The earliest examples of backhold wrestling are found in carvings in Ireland and later in France. The first such carving I have found is on the Market Cross of Kells ( c. 812-821). Another example is the Durrow High Cross (c. 900). This type of wrestling is still found in England and is known as North-Country wrestling or Scottish Backhold or Cumberland and Westmorland wrestling.

The second type of wrestling popular in Medieval England can be seen in MS Arundel 157, f. 95v. This is belt-wrestling.
This style looks initially like the backhold style, with the men standing chest to chest and with their heads resting on their
opponent's shoulder. But rather than grasping hands behind their opponent's back, they seize their belts instead. This is a significant difference, since it gives each wrestler much more leverage to throw their opponent to the ground.

Unlike North-Country wrestling, the holds in belt wrestling need not be held continually. They can be dropped and regained, as long as the person is not thrown in the meantime. An example of one man having dropped his hold can be seen in MS Douce 62, f. 067v.

Belt-wrestling is the oldest form of sport wrestling known and examples date back as far as 3000BC. However, it apparently is no longer practiced in England. Instead, it appears to have morphed into West-Country or Cornish wrestling. Cornish wrestling now uses a wrestling jacket from which the Judo jacket derived. But up until the beginning of the seventeenth century, Cornish wrestlers still used the belt or "girdle" for their wrestling style.

A third style of wrestling, initially unique to Medieval England, was "shawl" wrestling. This was very popular and an example can be seen in an illustration from Queen Mary's Psalter, plate 193, ff.159v-161. This scene shows two men stripped to their drawers holding on to the ends of a shawl which they have placed around their opponent's neck. The wrestling match appears to be taking place in an amphitheater and is being watched by a crowd of men and women. One man holds a tall pole with a cock on the top, presumably the prize for the winner of the match.

Shawl wrestling was both popular and dangerous. Many examples are found in manuscripts and carved in churches ( see The Ormesby Psalter plate sect. 9, f. 109 and Edward G. Tasker, Encyclopedia of Medieval Church Art, pp.289-290). Still, it would be easy to twist the shawl around the opponent' neck and strangle him. As a result, shawl wrestling went out of style and may no longer be practiced in England. Instead, it may have been subsumed into Cornish wrestling.

A fourth wrestling style and more benign is what Joseph Strutt called "the human quintain." Various examples of this form can be found in The Rutland Psalter. The basic style shows one man seated on a stool with his foot extended while a man standing lifts one leg and opposes his foot to the other man's. The object seems to be for each man to attempt to unbalance the other by pushing hard with his foot and then suddenly sliding by or easing up. ( Rutland Psalter plate f.43b). Alternatively, both men may be seated with their feet opposed while holding a common quoit. Here the object seems to be to push the other man off balance.
( Rutland Psalter, plate f.69b). So popular was this style of wrestling that it appears that people even trained for it by holding their foot out to be butted by a ram (Rutland Psalter, f.72b) A variant of this wrestling style called the "Hop Fight" has been adopted by the US Navy for physical training. In this variant, two men stand inside a circle and raise one foot to oppose their opponent. The objective is to unbalance the opponent or to push him outside the circle.

A fifth type of wrestling remains common as "horse and rider" or "pickaback" or "piggy back" wrestling. In this case two men raise two other men up on their shoulders and the top men attempt to overthrow each other. (Luttlell Psalter, (c) f. 62). See also Queen Mary's Psalter, p. 194a where one man is being overthrown. Again, this seems to have been a harmless game in which even monks and nuns could participate ( Romance of Alexander, f. 98v)

The sixth style of wrestling is harder to define. We see an example of it in MS Harley 3487, f.34r where two men are stripped to fight and they have grabbed each other's hair. Pulling hair was not allowed in any of the other styles of wrestling, although we find other examples of this in the manuscripts (Rutland Psalter, f.11). It is possible that this is the beginning of a freestyle wrestling style which might have been a bridge between the pankration of the Greeks and the Lancashire style of the nineteenth century. However, as yet I cannot be sure of this. It is also possible that this type of wrestling could have developed into ground wrestling eventually,although I have not found any example of this.

One thing that can be said about wrestling in Medieval England is that it was popular and that it had many different styles. And at least four of those styles; North-Country, Cornish, pickaback and the hop fight are practiced today.

I have some photos of wrestling woodcarvings in England.