Sport on the Sea (and River) 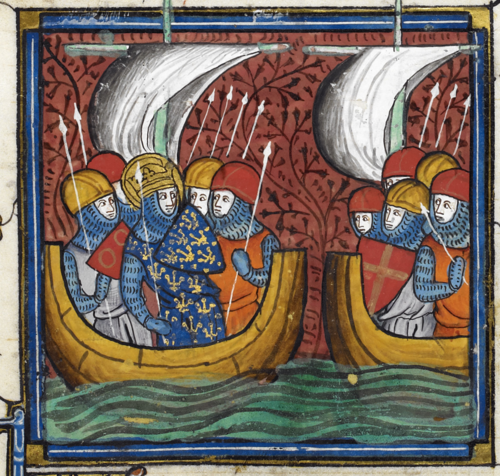 Sailing and rowing are among the oldest of Olympic events; both have been part of the Games from the beginning of the modern summer Olympics.  The origins of these sports, of course, are much older, and like archery, reach back to a time when they were vital aspects of warfare, as well as necessities for transportation, trade, and exploration.

The images in the British Library's illuminated manuscript collection reflect these ancient uses. Many miniatures of ships show them full of soldiers, heading for war or conquest (as above, depicting Louis IX and his army heading off on his second crusade), or ferrying pilgrims, saints, or explorers (see below, for an historiated initial of Dante setting sail for Purgatory). 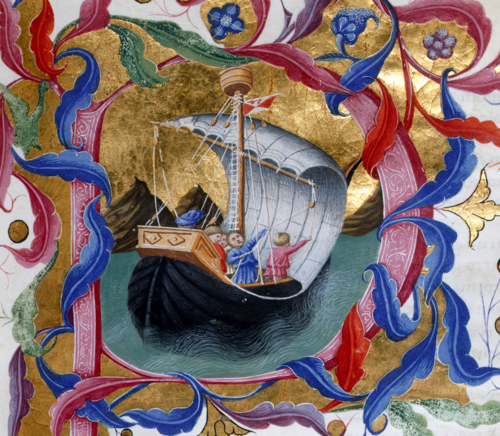 Competitors in the London 2012 sailing events - which was called yachting until 1996 - will take to the open waters at Weymouth Bay and Portland Harbour in Dorset, in a carefully designed venue.  These events will run from 29 July to 11 August, and one would imagine that today's Olympic sailors won't need to be concerned about encountering any of the medieval nautical hazards detailed in our manuscripts (two of which can be seen below). 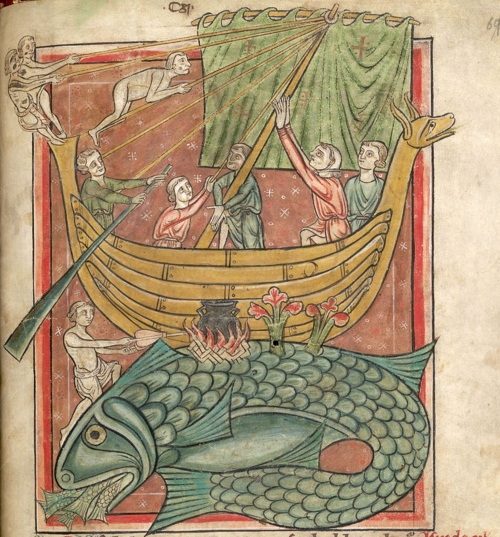 Miniature of a whale and a sailing boat, from a Bestiary, with extracts from Giraldus Cambrensis on Irish birds, England (Salisbury?), 2nd quarter of the 13th century, Harley 4751, f. 69

The first miniature comes from a bestiary (or book of beasts) in an entry about whales.  According to the text, whales were so large that ships occasionally would mistake one for an island, and land on its back.  As soon as the crew built a fire, however, the whale would awaken and dive to the depths; this miniature shows the moment when the whale descends, and the unready (and, strangely, partly unclothed) crew are scrambling with their sails and rigging.  Below is an image of another 'common' maritime danger - a siren.  In this scene, she has seized hold of a ship and collapsed its mast; one crewman tries to close his ears to her song while another grabs hold of an oar to effect an escape. 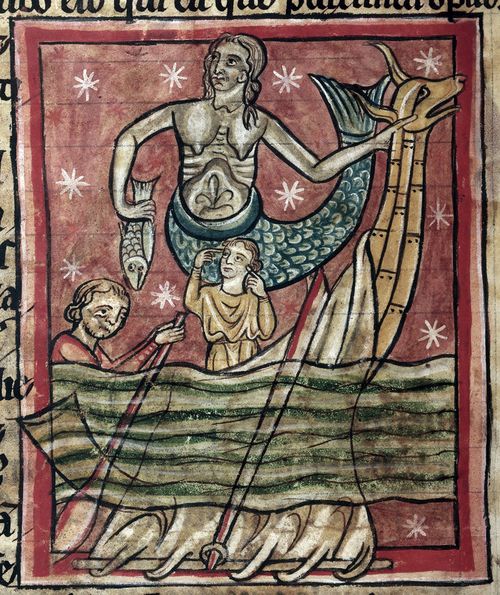 Detail of a miniature of a siren, from a Bestiary, with extracts from Giraldus Cambrensis on Irish birds, England (Salisbury?), 2nd quarter of the 13th century, Harley 4751, f. 47v

Medieval manuscripts often show rowers in the context of river crossings and trade (when their skills were not necessary to escape a destructive siren).  One of the most famous rivers in the Middle Ages was a mythical one - the river Acheron which was said to form the borders of Hell.  According to myth, Charon was the ferryman designated to carry souls across to perdition and depictions of him doing so were common (see below). 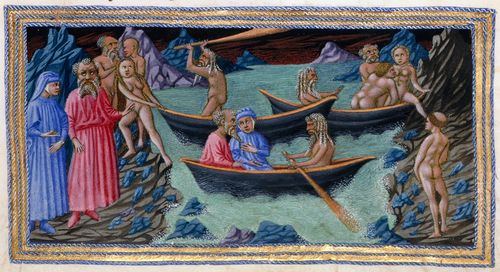 Detail of a miniature of Dante and Virgil being rowed by Charon across the river Acheron, by Priamo della Quercia, from Dante Alighieri’s Divina Commedia, Italy (Tuscany or Siena?), between 1444 and c. 1450, Yates Thompson 36, f. 6

2012 Olympic rowing events will take place in Eton Dorney, Buckinghamshire, near the River Thames, so we were particularly pleased to come across two images of medieval rowers on England's most famous river.  Both of these are from a 15th century version of John Lydgate's Lives of Saints Edmund and Fremund, and show helpful rivermen returning a fallen infant to its mother, and rescuing a boy who has fallen from London Bridge. 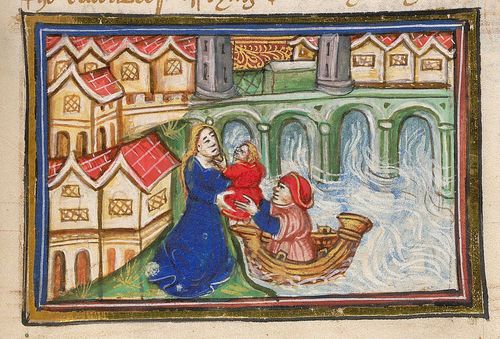 Detail of a miniature of a riverman returning a fallen infant to its mother, from John Lydgate’s Lives of Saints Edmund and Fremund, England (Bury St Edmunds?), between 1461 and c. 1475, Yates Thompson 47, f. 97 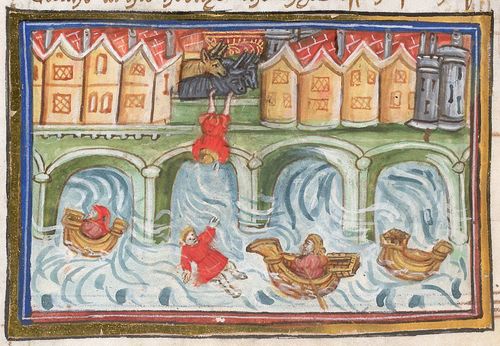 Detail of a miniature of a boy, fallen from London Bridge after being pushed by cattle, being rescued by rivermen on the Thames, from John Lydgate’s Lives of Saints Edmund and Fremund, England (Bury St Edmunds?), between 1461 and c. 1475, Yates Thompson 47, f. 94v

I love this post. It is rare to come across much information dealing with medieval manuscripts and the sea. For someone, like myself, who is currently writing a dissertation on this subject, it is a welcome find. Thank you!