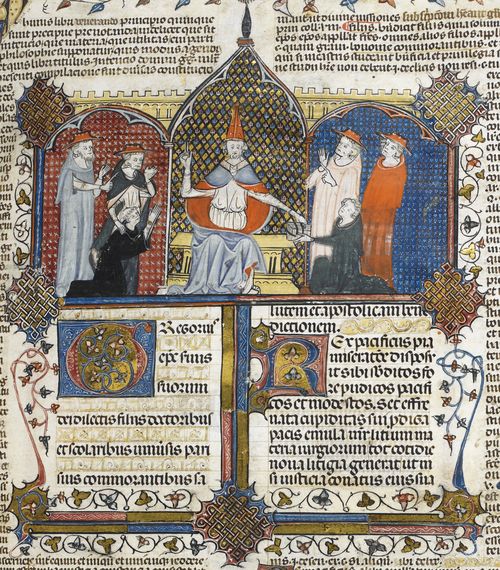 In about 1300, a scribe wrote 'The whole thing is finished; give the guy who wrote it a drink' in Latin on the recto of folio 314 of a copy of the Decretals of Gregory IX  that is now British Library, Royal MS 10 E. iv (see here for the Digitised Manuscripts record, and below for the scribe's note).  This scribe and his colleagues had certainly earned a pint; the 1,971 papal letters and other documents that make up the Decretals and the accompanying gloss fill 310 of the preceding folios. When this line was written, the scribes’ work may have been done, but the manuscript, known as the Smithfield Decretals, wasn’t finished in any conventional sense of the word.

And my book about this manuscript isn’t finished, either: this is my great shame. I’ve been toiling away at the Smithfield Decretals for most of my adult life, and I can’t quite bring myself to part with it. But what is so special about this manuscript? After all, there are (according to Martin Bertram's indispensable list) nearly 700 surviving manuscripts of the Decretals. The Smithfield Decretals stands apart from these other copies not because of its texts, which are fairly unremarkable witnesses to both the Decretals and the gloss, but because of its extraordinary illumination. Some of these images were included at the time that the book was made: each of the five major divisions in the text have a miniature (folios 4r, 91v, 167v, 229v, and 251r, below). But the pictorial fireworks came about 40 years later. By this time, the book was in England, where its owner commissioned a group of artists to illuminate every one of its folios, and also to append a grand table of contents to the beginning (fols. 1v-3v). Recently, for the first time, the British Library made the entire manuscript freely available in digital form, so you can marvel at the achievement of the scribes and illuminators for yourself. As you browse, bear in mind that the manuscript is almost half a metre tall. 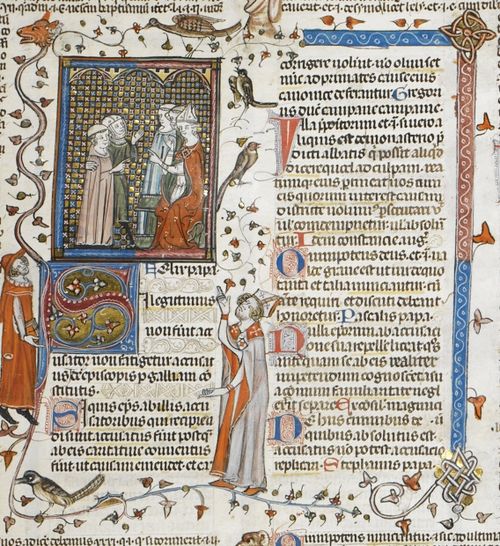 When I started working on the manuscript, the received wisdom was that the texts were copied in Italy, and that the marginal illumination was English; we also knew that by the 15th century the book was at the Augustinian priory of St Bartholomew's in Smithfield, London, because of the ex libris on folio 1r. Thanks to luck, good advice, and graft, I was able to link the coat of arms that appears some 25 times in the book to the Batayles of Essex (see, for example, folios 3v-4r, and the detail below of apes using the Batayle shield on folio 75v), and thus to a 14th century canon of St Bartholomew’s named John Batayle. It also became clear, especially following a steer from Robert Gibbs, that the book can’t have originated in Italy, but is more likely to have been French. In 2010, I stumbled across a copy of the Decretals from Toulouse (and now in Milan) that has illumination so similar to the chapter miniatures in the Smithfield manuscript that I am convinced that the book must originate in this vicinity.

The Toulousain discovery exemplifies the difficulty I have had finishing my book. Whenever I make a move to write the acknowledgments, number the figures, and check the notes one last time, I think: let’s have one last go at one or other intractable problem. Sometimes, I get somewhere; and then (of course) this makes it irresistible to have a crack at another niggling issue, and so it goes. I can’t quite bring myself to put into words how long this has been going on: let’s just say that my publisher isn’t known as ‘The Longsuffering David Way’ for nothing.

If the manuscript’s origins and provenance have been absorbing problems, then those presented by the English programme of illumination in its margins are positively addictive. There are more than 600 scenes in the bas-de-page and, depending on how you count, these comprise something like 30 narrative sequences, ranging from two to more than 40 scenes. Warner and Gilson’s 1921 catalogue of the Royal and King’s library gives a fair idea of the heterogeneity of the manuscript's pictorial contents. These tales have analogues in a dizzying variety of textual and visual sources, including the bible, hagiography, romance, preachers’ exempla, and fabliau. Some of the narratives have no surviving literary analogues; others constitute isolated visual renditions of once-popular tales. 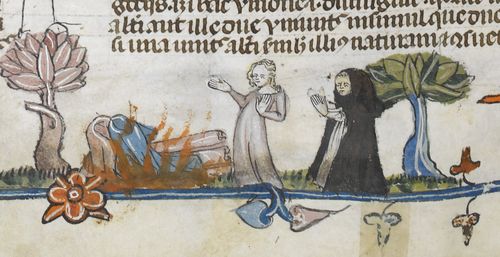 Identifying and interpreting these tales has been the most exciting, frustrating, and joyous endeavour of my professional life. In recent years, the biggest thrills have come from pinning down tales that have resisted explanation. One such narrative is a tangled story of violence, fornication and atonement that turns out to be an extraordinary version of the legend of the penitent harlot Thäis (fols. 177r-184v; see the detail above); my article on this will appear next year in a volume called The Social Life of Illumination (Brepols). 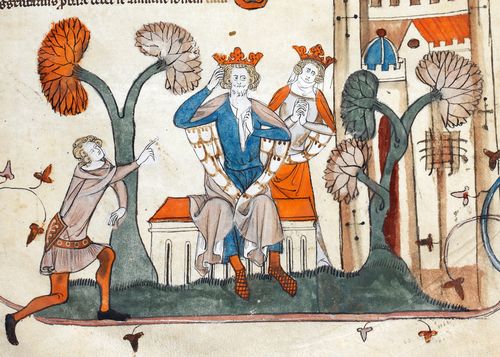 The most recent ‘Eureka!’ came last December, when I was researching my paper for the conference accompanying the Royal Manuscripts exhibition. The last narrative in the manuscript, which ends on the same page as the scribe’s thirsty colophon, is a tale of romance, royalty, and frenzied letter writing. Could this be the only pictorial version of the romance King Horn?  I suspect so; but I have to finish writing it up. When I do, my first toast will be to the Toulousain scribe who thought the Smithfield Decretals was finished when he put his pen down.

I was going to write my thesis on certain illustrations of the marriage cases in the decretum gratiani. I finally wrote on something completely different but it has lingered with me ever since. This has made me want to pick the paper up again...