Shot through the Heart and You're to Blame 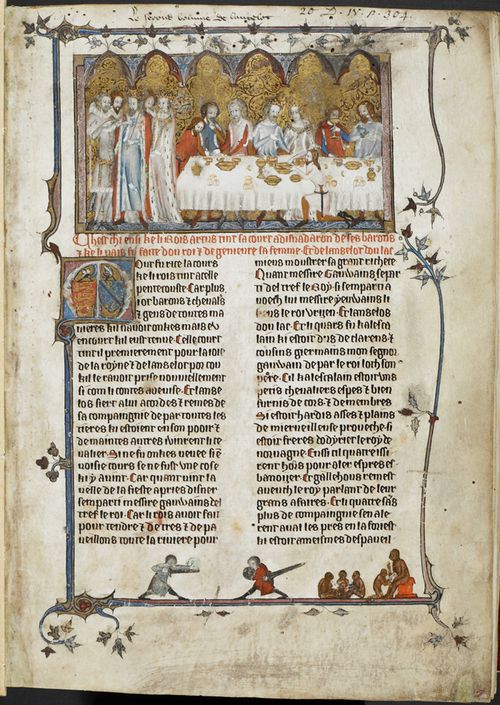 Miniature, above, of Arthur and Guinevere presiding at a feast and, to the left, Arthur in conversation with his barons while, behind him, Guinevere and Lancelot share a private word; in the margin below, two knights are locked in a duel and a group of monkeys attends school; from the Prose Lancelot, France, 1st quarter of the 14th century, Royal MS 20 D. iv, f. 1r; the large miniature was added in England (Pleshey castle), c. 1360-c. 1380.

'Chivalry', derived from the French cheval ('horse') and chevalier ('horseman' or 'knight'), means literally 'knightliness', a quality that, in the Middle Ages, could be variously defined in different regions and at different times: nobility of soul, adherence to a certain code of conduct, or even straightforward military strength.  Nowadays, 'chivalry' is usually used to describe a specific kind of interaction between the sexes, a transferral from a particular type of medieval knightliness, the stylized code we now refer to as 'courtly love'.  The medieval term was fin' amors, 'refined love', and it was primarily a literary construct, dictating the interactions between men and women in one of the Middle Ages' most enduring genres, the romance. 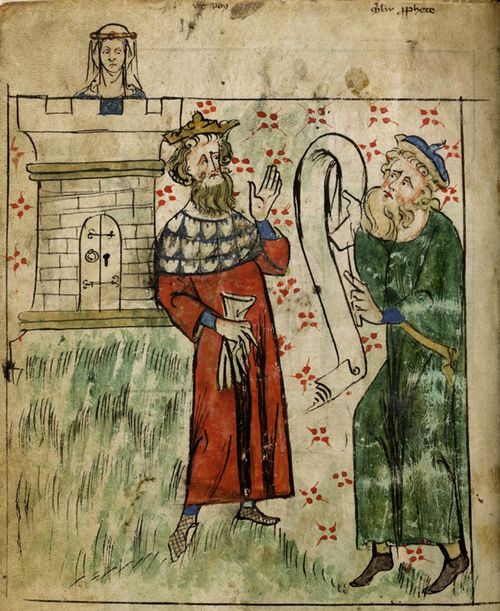 Detail of a miniature of King Uther Pendragon (left) conversing with Merlin, while, in the background, Igraine looks on from her castle; from Peter Langtoft, Chronicle of England, England, c. 1307-c. 1327, Royal MS 20 A. ii, f. 3v.

Medieval romance is most familiar from stories of King Arthur and the Round Table, where questing knights rescued damsels from towers, competing for their favour.  In the earliest Arthurian tales, however, the tone is more history than high romance, and the relationship between men and women far from 'refined'.  Arthur himself was conceived when King Uther Pendragon fell in love with the beautiful – and married – Duchess Igraine at a party.  Far from doing her courtly service and winning her love, however, Uther besieged her husband's castle and killed him in battle, then seduced the unwitting widow (as yet unaware of her husband's death) by having Merlin cast a spell disguising Uther as the late duke.  A rough and ready strategy – no word on whether, after they were married, Uther held open any doors for her. 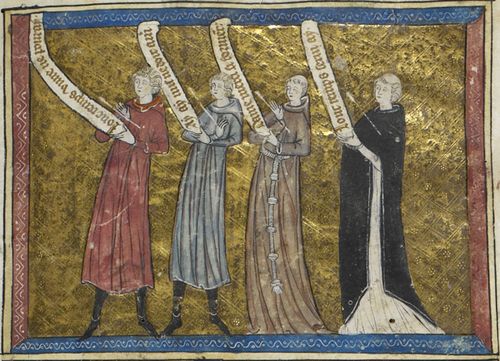 Later, the tone of the Arthurian subject-matter was transformed by the introduction and development of a set of literary conventions, the classic fin' amors.  Troubadours did poetic service to their beloveds, dedicating love songs to aristocratic patronesses, just as a knight offered homage and military service to his feudal lord.  Beauty of face and form was, at the time, considered a reflection of inner beauty, and nobility of soul was thought the natural birthright of those of noble rank.  The beauty of a woman struck the lover like an arrow, sometimes described as piercing the heart by way of the eyes: love at first sight.  Once wounded, the heart of the lover would burn with desire, longing to be quenched by the mercy of the beloved's reciprocal regard. Miniatures of (in the initial) a poet-lover presenting verses to his lady and (in the right margin) a lover's heart, burning on a fire and being quenched with rain; from a collection of 49 love sonnets, Italy (probably Milan), 2nd or 3rd quarter of the 15th century, King's MS 322, f. 1r.

Love could also be elevating, inspiring a lover to the achievement of great feats of martial strength and skill.  When a knight excelled in a tournament, it was evident that the worth – and thus beauty – of his inspiration must be great indeed, and the beauty of a lady could be judged by her champion's success.  Guinevere must have been very beautiful indeed – in one gently parodic story, Lancelot fought an opponent while facing backward, the better to keep in view Guinevere, who watched the battle from a tower behind him.  In the end he won by manoeuvring his enemy between himself and the queen so he could see both of them at once – his own strength a testament to the strength of his love. 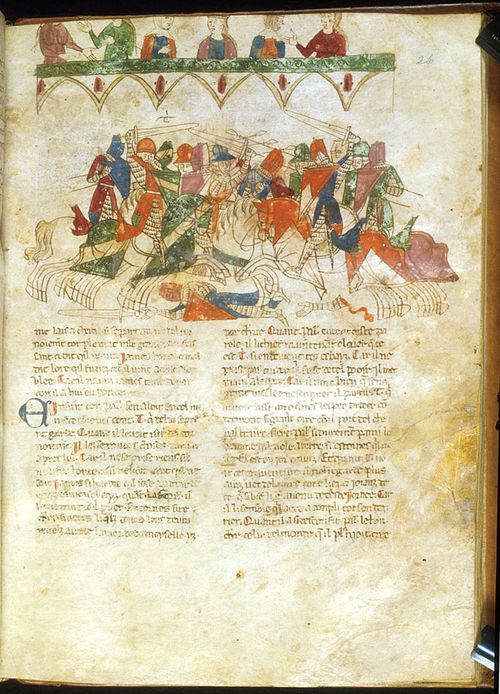 A tournament between knights (including Tristan, labelled with a 'Ti'), watched from a gallery by an audience of interested ladies; from the Prose Roman de Tristan, Italy (Genoa), last quarter of the 13th century or 1st quarter of the 14th century, Harley MS 4389, f. 29r.