A Royal Gift for Christmas

Cold, breezy weather, rain and snow, and the onset of darkness at 3pm, all herald that winter has arrived. To brighten up your days, we have recently put online one of the most lavishly illuminated prayerbooks to survive from the Middle Ages, the Book of Hours of John of Lancaster, duke of Bedford. Our treat for you to enjoy during these long, dark days was indeed a royal gift for Christmas. On 24 December 1430, Anne of Burgundy, duchess of Bedford, presented what is now known as the Bedford Hours (British Library Additional MS 18850) with her husband’s consent to her nephew, the 8-year-old Henry VI. The newly-crowned king of England was enjoying his Christmas with the ducal couple in their residence at Rouen, awaiting his French coronation in Paris. A page-long memorandum note inserted in the book (below) by the royal physician John Somerset commemorates this event. 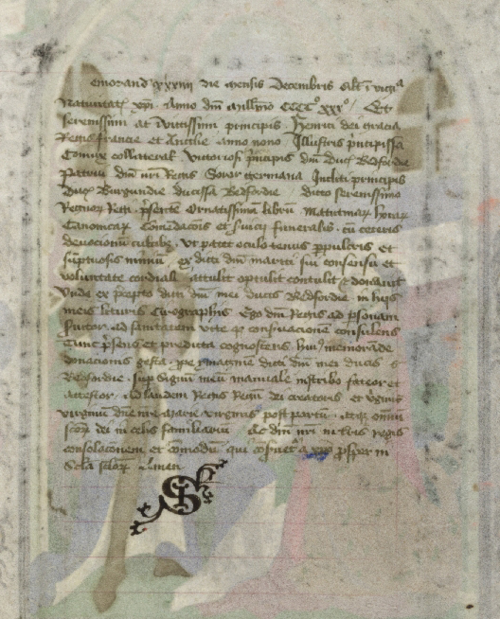 For our medieval ancestors, Christmas was not as obvious an occasion for gift-giving as it is now. By far more popular was the Roman-rooted, festive exchange of presents on New Year’s Day, known in France as etrennes (perhaps from the Roman goddess Strena, whose feast was celebrated on 1 January). At the turn of the 15th century large sums of money were spent on the etrennes, which became, especially in France and Burgundy, a lavish courtly ritual, with princes like Anne’s grandfather, Philip the Bold, duke of Burgundy, spending on average over 6% of his yearly budget on New Year’s presents. The duchess’s gift may well have emulated this relatively well-established tradition.

The manuscript she offered to Henry was a truly royal gift. Its 38 large miniatures and over 1,200 marginal roundels illustrating its prayers were painted by the best Parisian workshops of the time. The prayerbook was not made with Henry in mind, however. Its royal splendour was a recycled one. The work on the manuscript’s fabulous decoration may have started as early as the 1410s and another royal prince may have been its intended recipient, perhaps the early-deceased dauphin, Louis, duke of Guyenne. 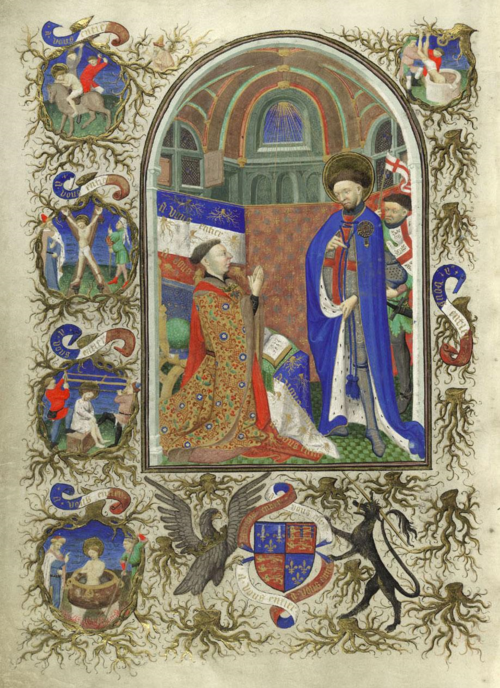 John, duke of Bedford, acquired the unfinished manuscript sometime after 1422. Following the deaths of his brother Henry V and the English king’s adoptive father, Charles VI of France, John became Regent of France on behalf of the baby King Henry VI. Soon after, in 1423, the duke married Anne of Burgundy in a powerful political match designed to ensure the stability of English rule in France. Two monumental portraits of the ducal couple in prayer before their patron saints were inserted together with their omnipresent heraldic devices and mottos (above and below), and several other scenes. 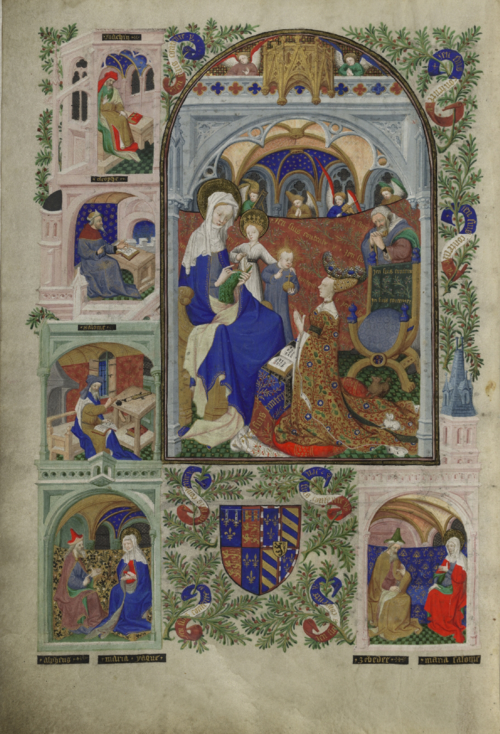 Among images added to the volume at that time was yet another remainder of the Anglo-Burgundian alliance. The last two leaves of the manuscript tell the story of the heavenly origin of the French royal coat of arms in picture and verse (below). The miniature depicts God sending his angel with a fleur-de-lis banner to the hermit of Joyenval, who then hands it over to Queen Clothilda. The next scene takes place in the royal palace. The queen presents the fleur-de-lis, on a shield, to Clovis, her husband and the first Christian king of France. 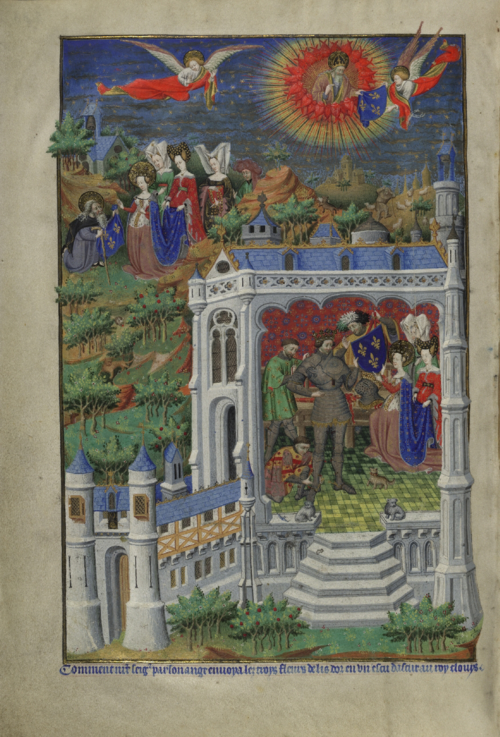 Clothilda like Anne was a Burgundian princess and it is not accidental that she is assisted here by a herald wearing a hat of green, white and black, the livery colours of the dukes of Burgundy, and that the gate to her palace bears the escutcheon of the lion rampant of Flanders. Clothilda’s role in the legend underlines the traditional Burgundian support to the French crown. A similar role was also expected from Anne, the Regent’s consort. 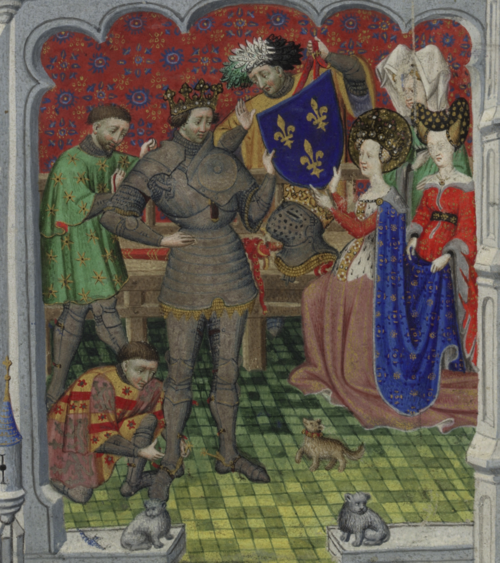 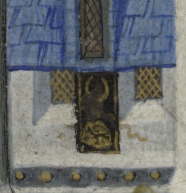 The legend of the fleurs-de-lis was popular in early-15th-century France. In December 1430, it received a new meaning, directly addressing Henry VI who was about to receive the French crown. A few months later, the legend of Clovis’s miraculous gift was performed as one of the tableaux vivants during Henry VI’s ceremonial entry to Paris. Although it is not certain whether Bedford had his prayerbook enhanced with new images as a wedding gift for his bride, or as a pre-coronation present to his nephew, in December 1430 the ducal Christmas gift was particularly well-suited for the future king of France.