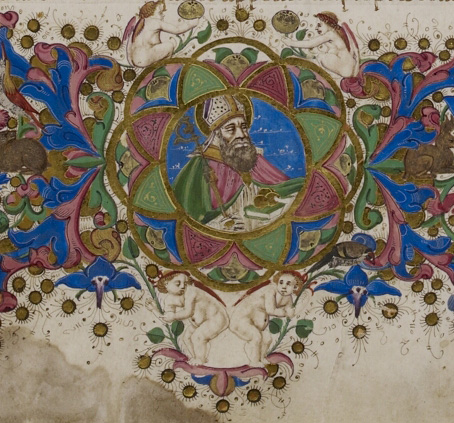 Jolly old St Nick, in his guise as a red-suited traveller through chimneys, is a figure of modern myth and pop culture, and medieval imagery of St Nicholas has very little in common with our modern Santa Claus. The historical Nicholas, about whom very little is known with certainty, was a 4th-century bishop of Myra, a town in Lycia, in modern-day Turkey. He is the patron saint of both Russia and Greece, and was a widely popular saint throughout medieval Europe. His feast day on 6 December has no doubt encouraged the association with Christmas. 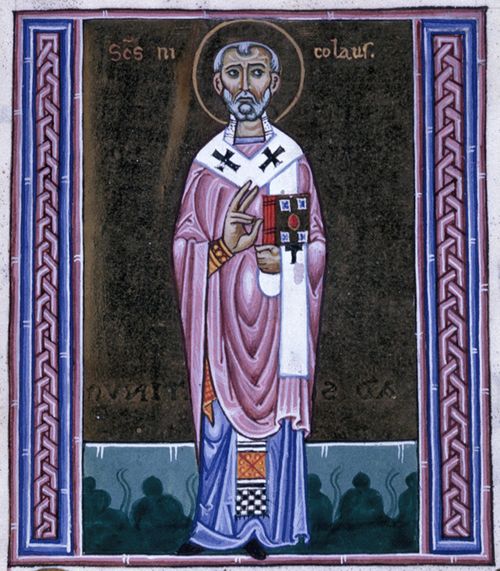 Setting aside the scanty historical record, it is in the colourful legends surrounding the saint's miracles that manuscript illuminators found their greatest inspiration. The final pages of the stunning Queen Mary Psalter are devoted to images from the life of St Nicholas, including a story of his precocious piety. Asceticism was highly valued in medieval spirituality, and Nicholas adopted such practices from birth. As an infant, he was said to have astonished his parents by fasting and refusing his mother's breast, limiting himself to only two abstemious meals per week. Proof positive he was destined for great things! 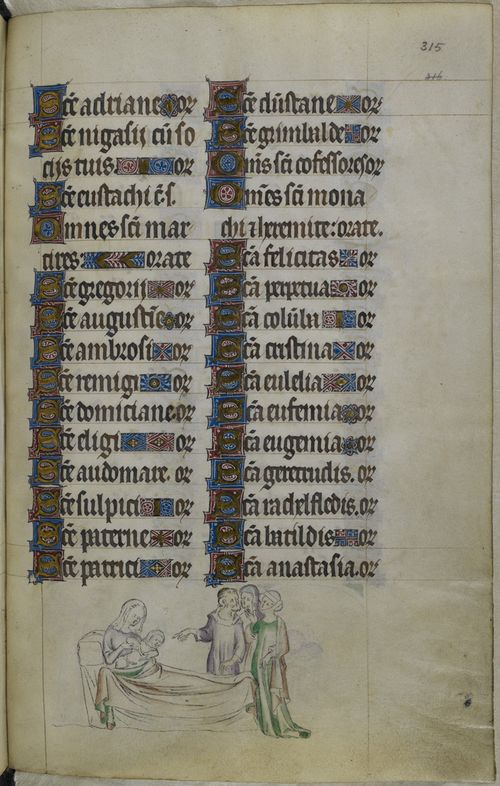 Perhaps the best-known story has also given rise to his principal identifying attribute, three small bags of gold. Nicholas himself was well-off, coming from a wealthy family. But one of his neighbours, a nobleman fallen on hard times, had three unmarried daughters he could no longer afford to support. The daughters were considering turning to prostitution in order to put food on the table. Nicholas wanted to help the family, and so for each of the three daughters, he crept by the house at night while the family slept and tossed a parcel of gold in the window – the foundational Secret Santa! The poor man was able to use the money as a dowry for the girls, so that they were married and provided for. 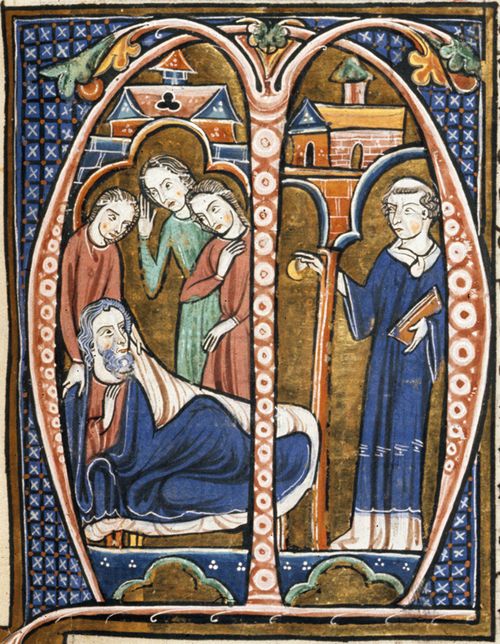 Detail of an historiated initial 'M' of St Nicholas passing gold through the window to the poor man and his three daughters; from Wauchier de Denain, Lives of the Saints, France (Paris), 2nd quarter of the 13th century, Royal MS 20 D. vi, f. 144r.

In addition to his generosity, Nicholas was also revered as a patron of children, providing some of the strongest connections between the medieval saint and the modern St Nick. In another famous story, Nicholas performed a miracle to save the life of three boys. The children had been murdered by a wicked butcher, who concealed their bodies by cutting them up and throwing the remains into a tub he used for curing meat. Nicholas not only found them there, he was able to restore the dismembered boys to life, and the image of the bishop standing over the three now-healed children standing up from the tub is a popular subject for illustration. 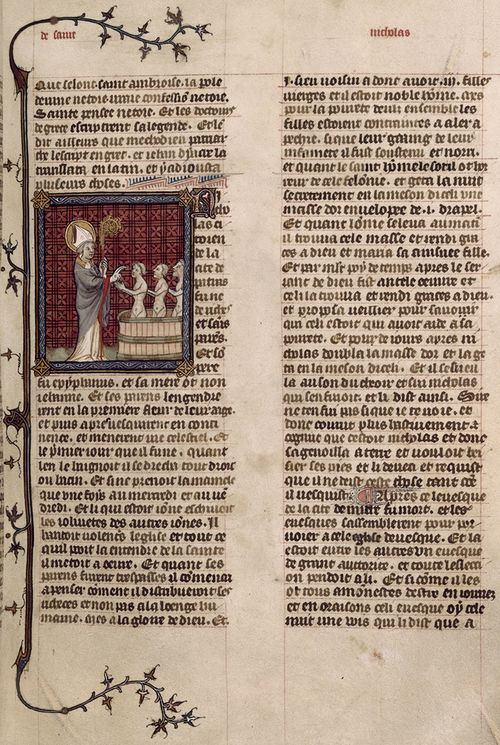 Detail of a miniature of St Nicholas with the three boys in the tub; from Iacobus de Voragine, Legenda aurea, translated into French by Jean de Vignay, France (Paris), 1382, Royal MS 19 B. xvii, f. 14r.

Thank you for the very interesting article and beautiful photos of illuminations, but please correct the typo in "piata" (Regola della Compagnia di S. Maria della piata di Firenze): it should say "pietà".
Thank you and merry Christmas!

Fascinating, funny the extent to which we've morphed this character. Thanks for sharing!