Alfred the Great: Not a Domestic God, but No Slouch, Either! 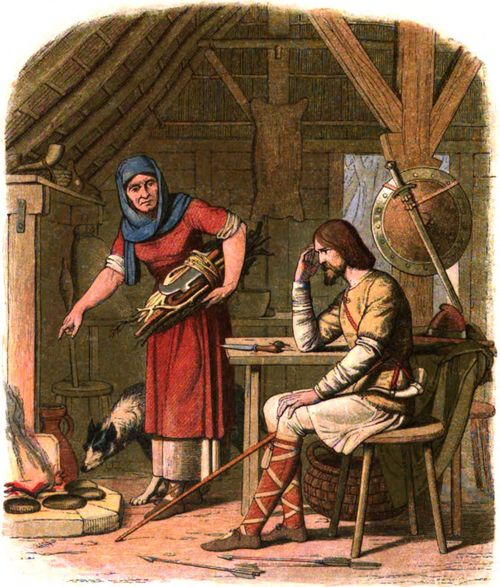 
Alfred the Great, king of the West Saxons from 871 to 899, was not just an early example of male incompetence in the kitchen (legend has it that while hiding in the marshes from the Viking invaders he sheltered in the hut of the local purveyor of cupcakes and found himself in big trouble for allowing her cakes to burn when he was left in charge of the oven. His excuse was that he was busy reading!).  Though he was more than a match for the Viking thugs, defeating them convincingly in 878, Alfred had brains as well as brawn, and a softer side, it seems. One of his greatest achievements was a revival of culture and learning in his kingdom; during his reign he organized and was probably involved in translating key religious works into Old English so that they could be understood by his people, whose knowledge of  Latin had declined during almost two hundred years of upheaval and warfare. 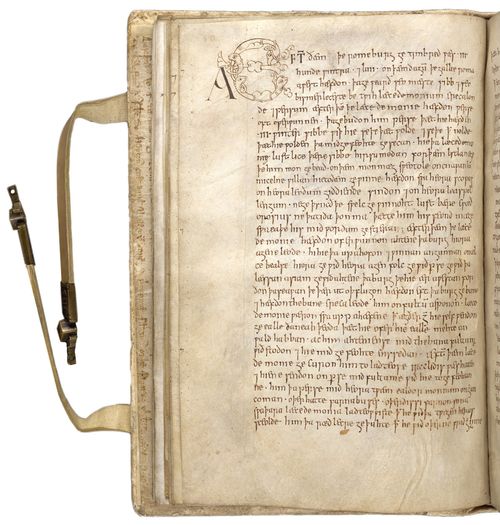 A British Library manuscript in Old English (Additional MS 47967), contains a translation of the Latin work by Orosius, Historia adversus paganos (History against the pagans). It was written at a time when the Roman Empire was threatened with destruction by pagan armies, a situation which must have seemed familiar to Alfred and the West Saxons. Orosius's aim was to show that although the situation was bad in Christian times, it had been worse before under the pagan gods, and the resulting work is a concise history of the world from Creation to 417 from the Christian viewpoint. Though not a work of great scholarship, it had become a popular source of world history and would have suited Alfred's educational purposes admirably.  The Old English version has been freely adapted from the Latin, with additional contemporary material, including an account of the voyages of Ohthere and Wulfstan, an important source for the geography of northern and central Europe in the ninth century.  The text states that the Norseman Ohthere delivered this account to King Alfred, his hlaford (lord), indicating a close connection to the Anglo-Saxon court. Orosius was listed by early historians among the translations undertaken by the king himself, but there is no further evidence that it is Alfred's work and the style differs from Alfred's other works, such as the translation of Gregory's Pastoral Care. 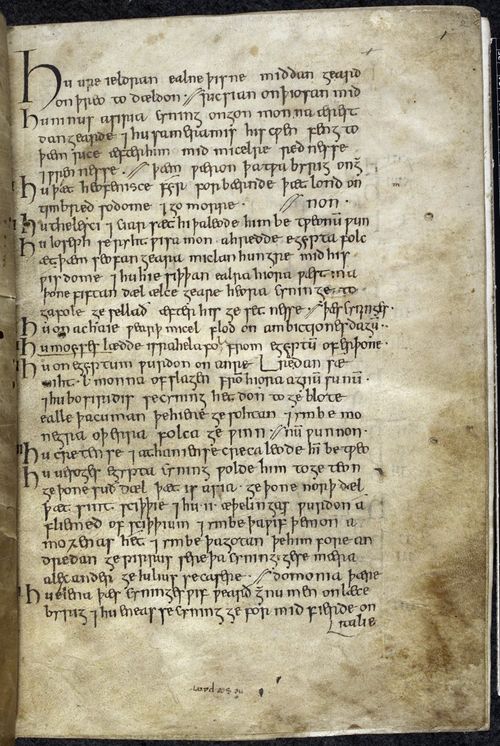 The British Library manuscript is the earliest surviving copy of the Old English work, having been produced between about 892 and 925 (in other words perhaps towards the end of Alfred's reign), perhaps in his scriptorium at Winchester.  It is written in a square Anglo-Saxon minuscule associated with Winchester, and was probably copied by the scribe who wrote the entries in the Parker manuscript of the Anglo-Saxon Chronicle for 892 to 933. Distinctive features are the slight horns at the tops of vertical strokes, the letter 'a', formed like a 'u' with the top closed by a slanting stroke, and the tall 'e'.  Five decorated initials mark the beginnings of the first five books.  They contain outline zoomorphic drawings; three are of complete creatures, while two are merely of the animals' heads with interlacing leaves and acanthus. In the miniature below, the three conjoined creatures have tongues, claws, tails and horns whose extremities morph into leafy ornament.  While the foliage is adapted from Carolingian designs, the interlace is of insular origin. 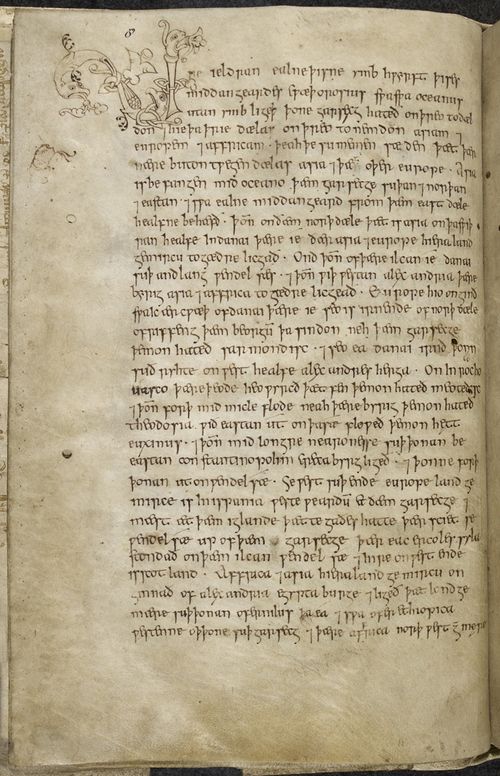 Zoomorphic initial 'U'(re) with 3 heads and interlaced bodies at the beginning of Book I, Chapter I, from Orosius' Historum adversum paganos, England (Winchester?), between c. 892 and c. 925, Additional MS 47967, f. 5v

The Orosius text is written in 'early West-Saxon', the dialect found in a very small number of manuscripts associated with King Alfred's literary circle, though it contains certain linguistic features such as the smoothing of ea to e before palatal and velar consonants and a preference for –ade over –ode in forming the past tense, which may indicate Anglian dialectal influence or a later stage of the language.   Nothing further is known of the origins or history of the manuscript before the seventeenth century, when it was catalogued in the library of the duke of Lauderdale.  It was bought by the British Museum in 1953 and is now in the British Library.  Along with the other Old English manuscripts in the Additional collection, it has recently been added to our online Catalogue of Illuminated Manuscripts (see here for the entry).