The Tale of the Errant Archbishop 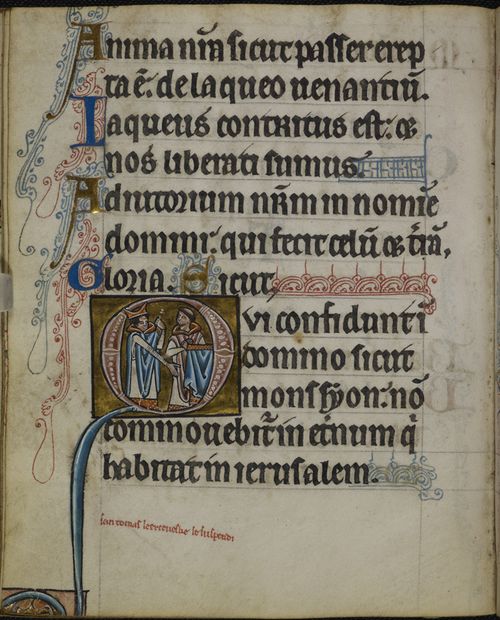 Initial 'Q'(ui) of St Thomas Becket, wearing the mitre of his rank as Archbishop, defrocking a priest for only knowing how to sing one form of the mass; the rubric below reads 'sein tomas le erceveske le suspendi' ('St Thomas the Archbishop suspended him'); from the De Brailes Hours, England (Oxford), c. 1240, Add. MS 49999, f. 45v.

Books of Hours, a common type of manuscript in the late Middle Ages, contain the cycle of Psalms and other prayers that would be recited for the monastic hours, at set times during the day.  They are tools for meditation, as well as for the recitation of the liturgy, and are often gloriously illustrated.  While the prayers in these manuscripts are not narrative, the pictures sometimes can be, and the stories that they tell can create a second 'text', a visible spur to pious contemplation layered alongside the aural experience of listening to the service. 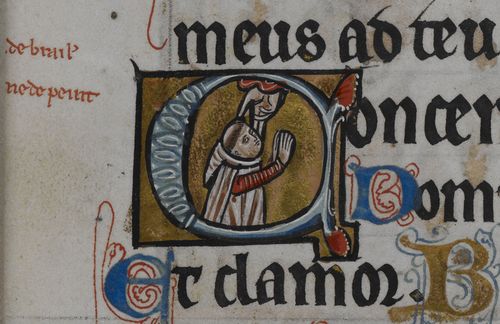 The De Brailes Hours (now fully available online!) is a very early example of a Book of Hours, and already shows some of the important characteristics of the form.  It is a small manuscript, only about the size of an open hand, a jewel sized for close examination and portability.  And its appearance is dominated by its many historiated initials on religious subjects.  The artist of these pictures is known, and has actually provided his idealized portrait.  Alongside the picture of a cleric at prayer, receiving a blessing from the hand of God reaching down from heaven, a small rubric in red ink (here partly obscured by the edge of the facing page) labels it as 'W de brailes qui me depeint' ('W[illiam] de Brailes who painted me').

Detail of a miniature of the martyrdom of St Thomas Becket, killed by Henry II's men-at-arms; the image is marred by a large X crossing it out, no doubt made after the Reformation, when it became politically dangerous to revere Becket as a symbol of ecclesiastical resistance to royal authority; from the Luttrell Psalter, England (Lincoln), 1325-1335, Add. MS 42130, f. 52r.

The Hours of the Virgin – the section of the manuscript with prayers specifically dedicated to honouring Mary – includes, near the end, images of Miracles of the Virgin, colourful tales about Mary's intervention on behalf of sinners.  One such story features a perhaps unlikely villain: St Thomas Becket, the Archbishop of Canterbury murdered on the orders of King Henry II.  In later years, Becket became a problematic figure.  The struggle between secular and ecclesiastical power encapsulated in his story made him a particular target for Henry VIII after the king broke with the Catholic church.  But in the Middle Ages, Becket was a very popular saint, and his tomb at Canterbury was an important shrine (as well as the destination for Geoffrey Chaucer and his fictional travelling companions). 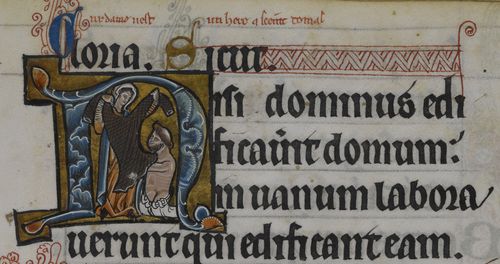 Here, however, Becket represents an ecclesiastical hierarchy at odds with a devout but unlettered piety.  There once was a priest, the story goes, who only knew one version of the mass, dedicated to Mary.  The Archbishop disapproved of such incompetence and ordered him defrocked, refusing to relent even when his unfortunate subordinate begged for mercy.  Finally, the priest prayed to his patroness.  Mary appeared to Becket, ordering him to wear a hair shirt under his clothes as a private penance.  Then she revealed her secret command to the priest, instructing him to take his knowledge to Becket as a sign of her favour – how could the priest know of the shirt if the Virgin herself had not told him?  In the end, we see a reversal of roles, with Becket, rather than the priest, the one begging forgiveness, as he reinstates his pious underling.  Even a saint sometimes goes astray! 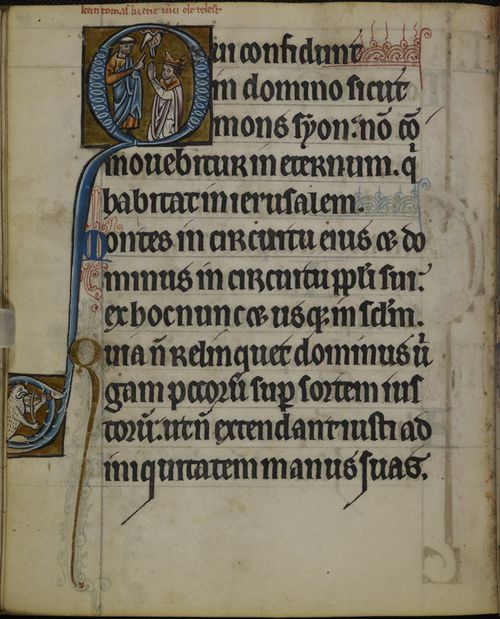 Initial 'Q'(ui) of St Thomas begging for mercy after reinstating the priest, while the hand of God offers blessing; the rubric above reads 'scein tomas lu crie merci e le relest' ('St Thomas cries mercy of him and [he] forgives him'), inverting earlier images (not shown) of the priest kneeling before Thomas, with a rubric 'ne poet aver reles' ('He cannot have forgiveness'); from the De Brailes Hours, England (Oxford), c. 1240, Add. MS 49999, f. 55v.