Researchers at the British Library have found sensational evidence for the existence of the Loch Ness Monster. Hidden within the pages of a 12th-century manuscript is not only a description but also a drawing of the beast known to millions as Nessie. 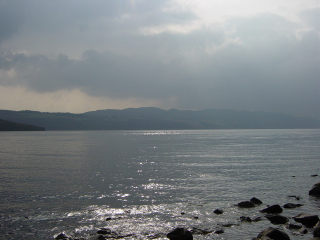 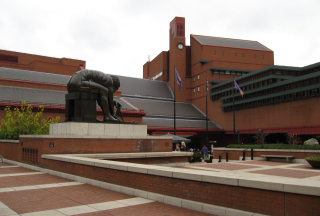 Loch Ness in Scotland, courtesy of Wikimedia Commons; image of the British Library, London, from Wikipedia

Walter of Bingham (d. c. 1197) was a minor cleric from Nottinghamshire who, unable to fulfill his vow to go on the Third Crusade, made a pilgrimage to the holy sites of Scotland. William's own manuscript of Itinerarium Scotiae (The Journey Through Scotland) has been long neglected , but shows the author's fascination with Scottish history, customs and wildlife. One commentator has remarked that "Walter of Bingham is to Scotland what Marco Polo is to China". The tone of The Journey Through Scotland emulates the writings of Walter's famous mentor, Gerald of Wales, who wrote accounts of Ireland and Wales in the 1180s and 1190s. 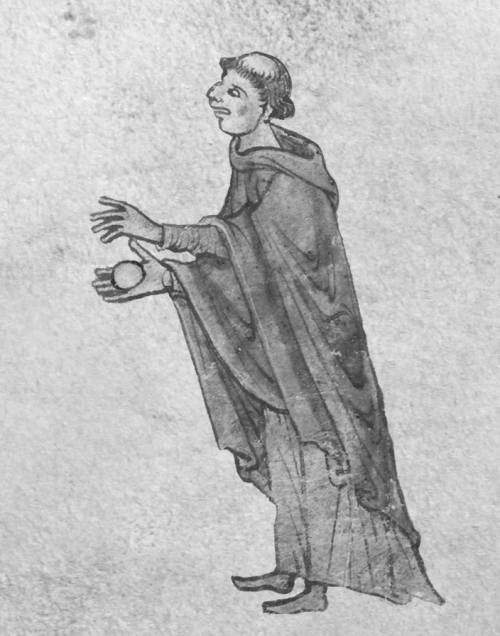 Walter’s encounter with Nessie came one summer evening, as he approached the banks of the River Ness. Students of the Loch Ness Monster will be aware that in the earliest account, found in Adomnán’s Life of St Columba (written around AD 700), Nessie was seen not in the loch but in the neighbouring river; and this is corroborated by Walter’s story. Seeking safe passage across the river, Walter of Bingham asked a group of fishermen mending their nets, but they rejected his request with terror in their eyes. Next, walking downstream, Walter encountered a young boy dragging his coracle along the shore. Hesitating at first, the boy agreed to row Walter of Bingham across in return for a silver coin. They crossed without mishap, much to Walter’s displeasure, for he was self-confessedly thrifty; but as he watched the coracle heading back to the other shore, a great beast with fire sparking from its eyes suddenly erupted from below the waters, uttered an almighty roar, and then dragged the coracle and its unhappy occupant beneath the waves.

The Loch Ness Monster, and the boy in the overturned coracle, as seen with the naked eye (London, British Library, MS Cotton Hilarius A. XV, f. 104r). The page is now exceedingly faded, but the image can be recovered using RZS©.

Walter of Bingham’s account provides firm proof of the existence of the Loch Ness Monster in the 12th century. But what is perhaps more remarkable is the drawing of Nessie which accompanies the text, now severely faded and barely visible with the naked eye. The drawing’s significance was first recognized by an international team of imaging scientists, cryptozoologists and manuscript experts, who for the past year have been analysing the British Library’s pictures of mythical beasts. Using a pioneering technique known as Re-Zoom Spectroscopy (RZS), the scientists took multiple photographs of the page in question, which were overlaid and processed using a “Guggenheim manipulator”. The resulting image demonstrates that Walter of Bingham made a careful depiction of Nessie, and can now be revealed as the earliest known picture of the Loch Ness Monster.

The Loch Ness Monster, as recovered using RZS©. Walter of Bingham is depicted on the right (an early example of a self-portrait), with the wretched occupant of the coracle about to be tossed into the water.

The shape of Nessie as recorded by Walter is hugely significant. Traditionally, the Loch Ness Monster is depicted in serpentine form, often with long humps protruding above the waves. The beast seen by Walter of Bingham most closely resembles a gigantic bear, and experts suggest that it may have been an enormous cousin of the modern-day Grizzly Bear or Kodiak Bear, now restricted to North America, or perhaps a descendant of the extinct Cave Bear. To judge by the survival of animal bones, the presence of a massive bear in remote, 12th-century Scotland is not entirely unexpected, and its behaviour indicates that, when observed by Walter of Bingham, it may have been defending its territory or guarding its young. But this is the first occasion that Nessie has received plausible identification as a bear: perhaps a relict population of bears survived in the vicinity of Loch Ness for many years, giving rise to the legend which surrounds it. 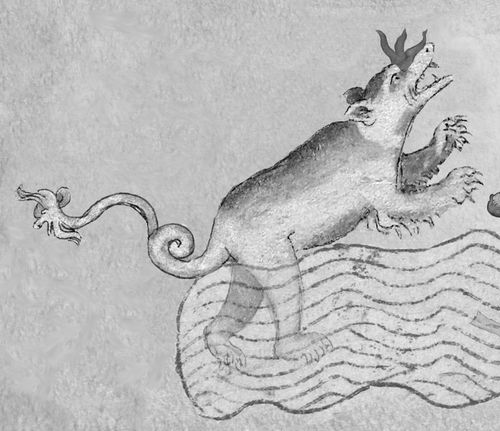 Could this be the oldest picture of Nessie? (recovered using RZS©).

We are extremely grateful to Professor Otto Haas (Osnabrück), Dr Ida Winchester (Delaware) and their team for sharing their research with us. A full account of the discovery will be published in the Journal of Applied Cryptozoology, but for regular updates subscribe to our Twitter feed @BLMedieval.

An artist's reconstruction of the Loch Ness Monster, restoring what are believed to be the original colours, based on detailed study of the pigments used in comparable western European drawings (Sarah J Biggs, 2013).

As a descendant of Walter of Bingham, I cannot tell you how redeeming this blog post is to our family! We have been ridiculed over the centuries and our forefather was discredited because of his tales of being a witness to Nessie! We can live in peace as this fulfills a life long dream. Would it be possible to purchase a poster size copy of the artist's reconstruction?
It would be vindication and would look terrific in our living room!
Thank you, British Library!

I knew it!! I knew it all along!!
OK ... so it's a Big Bear. So what? Cool! Mystery finally solved!!
Thank you British Library and Sarah Biggs.
H. Bradley

Truly pioneering work. I have heard whispers however that Master Route, who famously declared himself a 'man of the clap ham omnibus' saw such a thing whilst making his survey of awae scotia. Wouldn't it be wonderful to find that survey as well as his infamous, some say entirely mythical foray into Roman culture, 'circus picadillius via ratae corvieltavorum'!

I congratulate the team at the British Library for their excellent research on this fascinating pictorial palimpsest. I will be submitting a paper of my own "Nessie" research to Science shortly, with this newly discovered document as corroborating evidence.

By the way, the current descendants of Walter of Bingham are afflicted with congenital insanity and are not to be trusted.

Thank you, thank you, my dear and noble friends! You have restored my faith in humanity: I've always believed in the existence of Nessie in the face of adversity of reason and bitter and cynical scepticism. By this remarkable discovery you have achieved what Brian Cox, Richard Dawkins and Sir David Attenborough combined couldn't!

P.S. This fearless gentleman Walter of Bingham's trip to Scotland is no lesser feat than doing a barefoot pilgrimage to Rome, washing prostitutes feet and feeding the lepers from his mouth on the way, like they did in the Middle Ages!

It may be of interest to other readers to know that Nessie sightings increase when Ursa Major is in the ascendant. Indeed, there is (admittedly suppositious) evidence that Shakespeare was aware of this, and encoded his knowledge in the passage from Hamlet which is still, innocently, read as "who would fardels bear". There is a Whuh Wood, remnant of the Great Wild Wood, in the vicinity of Loch Ness!

There is still a lock ness monster.. and i have reason to beleave it is a plesiosaur.. look around the evadance is everywhere