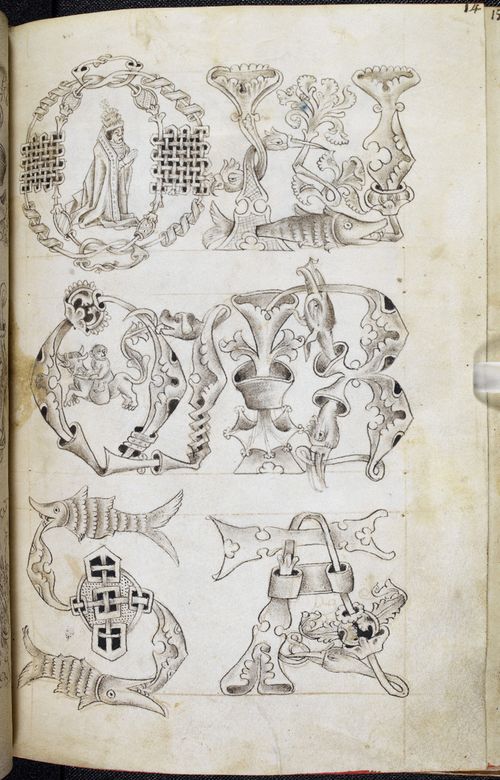 The Macclesfield Alphabet Book is an exquisitely beautiful c. 15th-century 'pattern book'. It contains the most complete set of designs for manuscript decoration known to have survived from late-medieval Britain. It might have been used as a model book for scribes to copy from whilst creating luxury books, or perhaps as a display of an artist's or workshop's skills, to show to potential patrons.  Until a few years ago, its existence was unknown, with the British Library holding the only other known English late medieval pattern book (Sloane MS 1448a, see here for more). Our manuscript, now British Library Additional MS 88887, was in the collection of the Earls of Macclesfield at Shirburn Castle and when it came onto the market in 2009, the Library was able to purchase it using funds raised from benefactors, including the National Heritage Memorial Fund, The Art Fund, and many private individuals. 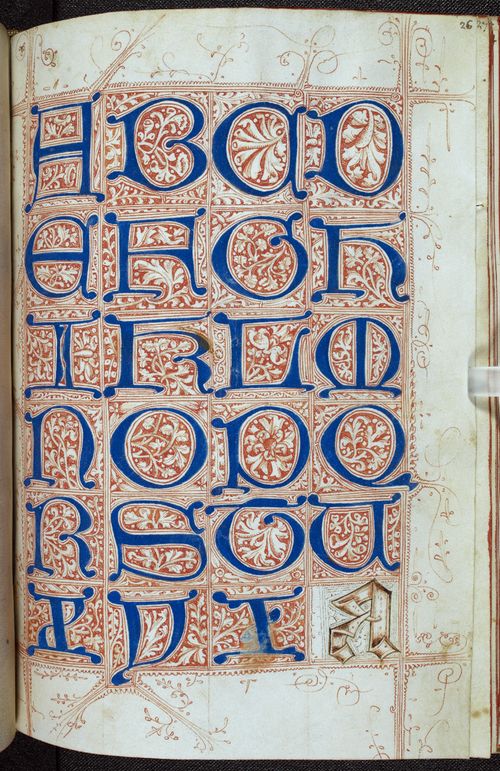 The manuscript contains a collection of 14 different sets of specimen initials or letters in alphabetical order in the Gothic script of the 15th century, with later additions in the Humanistic script of the early 16th century. The 'ABCs' are wonderfully illustrated, including letters formed using animals and people. Viewing the images online, one cannot help but be captivated by the inventiveness of the artists, and wonder at the work's real purpose, as some of the designs do not seem to have been created for use in real books. 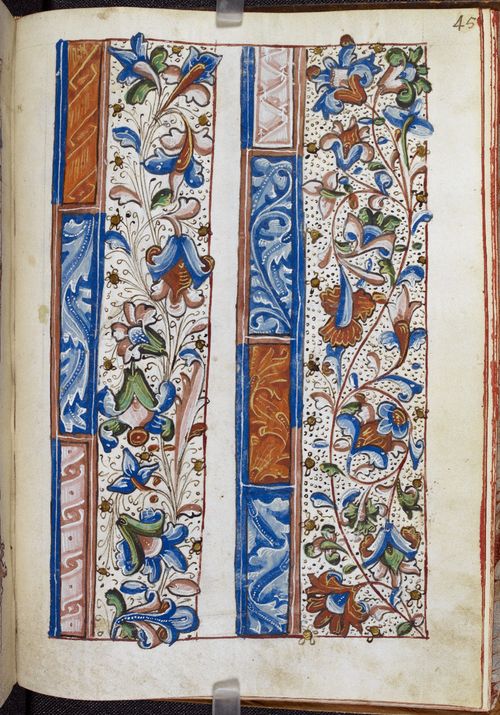 Along with the alphabets there are also included colourful designs for the borders and margins of manuscripts.  Additionally, on f. 9v there is a mysterious drawing of an uprooted tree with a shield inscribed 'R.B.' (see below). An emblem, perhaps a rebus in colours with gold with three flowers and two gold gloves hanging down and the word 'cli[m]i[n]g' or 'ch[ar]i[n]g', is on f. 46r (see below). The full significance of these images is yet to be determined, so if there are any manuscript sleuths out there who have the answer, please send us your ideas! 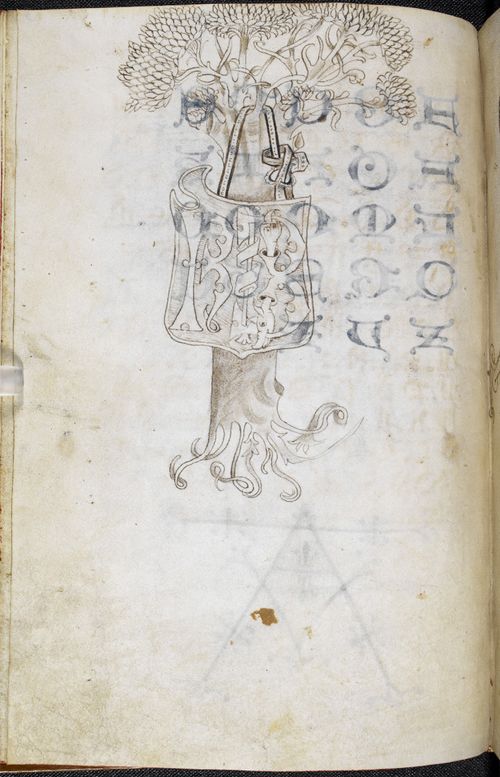 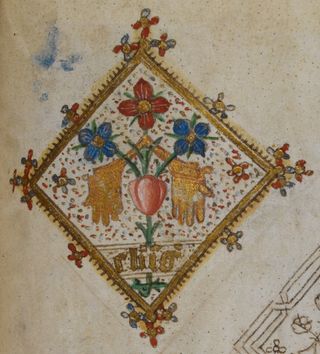 just stunning! would love to see more detail shots of the medieval typography you have!

For me, this is totally logical. The first three examples above look like one of two things, either fully worked prototypes, or even catalogue pages to show prospective clients. As an artist, I frequently do prototypes of designs, often going as far as completing them. When it comes to illuminated letters, you have to do all the letters in order to ensure the design actually works with all of them. Better to know in advance rather than in the middle of a commissioned piece.

The last one looks very much like a prototype sketch that the artist could either finish, or more likely (imho) redo the design with changes he wishes to make. It is not the first time I have abandoned a work part way through in order to correct things I do not like.

In modern day terms, this is a book of fonts, a portfolio if you prefer. It includes finished works, items still in pencil, and it includes a few of the artist's experiments. Today the artist would say "Pick the typeface for your document and pick the fancy or illuminated letters for the beginning of pages or major sections ... customization available. Don't forget to pick a fancy border or design for your title pages."

Below the rebus is, very faintly, what apears to be a pair of triangles superimposed one apex up, the other vv. To my eye it looks a bit like the Masonic "Setsquare & compasses" device. Is this too early for a mason's mark ? (I know the theory that the Freemasons were a creation of the 18th century is not universally accepted.) Might thre be a masonic connection ?

The faint image below the rebus seems to be the old form of A with the broken crossbar, even though there is also a straight arm with a fleur de lys symbol. This could possibly be a sketch for an AV monogram rather than a use of freemason symbols. There are some small cadel-like embellishments on the sides. This could be showing through from the other side of the vellum.

I would suggest the word is chig 'cheering'. The stylised hooked abbreviation after the 'h' (which is certainly that not 'li') is usually for 'er'. The word is very common in Middle English and has many possible senses to complicate the rebus. See MED s.v. cheren and OED s.v. cheer with all the modern meanings of the word cited, including 'entertaining'. But there are other ME meanings including: 'challenging' (interesting in relation to the gloves perhaps - see MED s.v. glove); 'encouraging, tending, curing' perhaps of interest in relation to what looks like a human heart through which the quatrefoil plant is growing.

The pair could be read as patterns for the sort of symbolic love-messages exchanged for discretion or, sometimes, simply as part of an elegant pastime, as 'parlour game'.
In that case the first might announce that his name now depends upon her (or his) love - I'm taking the rather exotic tree as a form of rose - and then the reply (second motif) might signify that it has indeed taken root ~ in the heart of the beloved. The second looks as if it might be designed as an embroidery motif, worn to signal devotion, perhaps before the families had been approached.

Hence, the [be of good] "cheer" on the second motif.

There is another interpretation which strikes me as possible, but which I'll leave.