Christine de Pizan and the Book of the Queen

We are thrilled to announce the recent upload of one of our best-loved (and most-requested) medieval manuscripts to our Digitised Manuscripts site; Christine de Pizan’s Book of the Queen (Harley MS 4431) is now online! 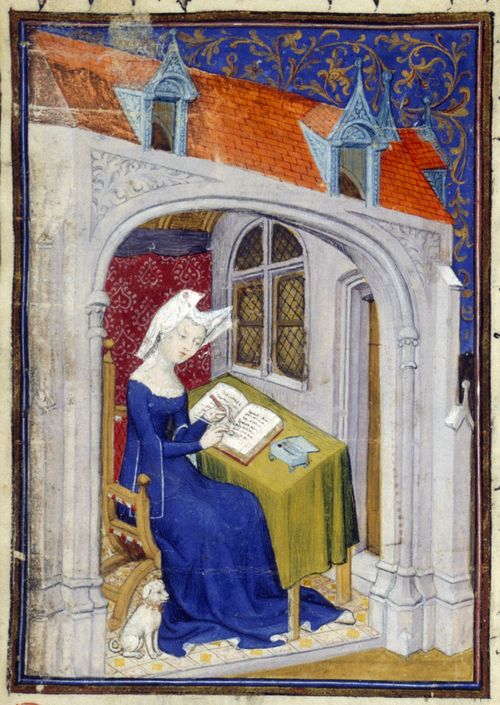 Detail of a miniature of Christine de Pizan in her study at the beginning of the ‘Cent balades’, Harley MS 4431, f. 4r

Christine de Pizan is widely regarded as one of Europe’s earliest female professional authors, and is certainly one of the most prolific.  Born in Venice in 1365, she moved to Paris as a young child when her father was appointed the royal astrologer and alchemist to King Charles V of France.  Christine took advantage of the intellectual atmosphere of the court, making use of the royal library to teach herself languages, history, and literature.  Her writing career began at the age of 24, after her husband, a royal secretary, died suddenly, and she was faced with the necessity of providing for herself and her small children.  She soon attracted the patronage of a number of nobles at court, and produced dozens of major works over the next three decades, along with hundreds of ballads and poems. The largest extant collection of her writing can be found in Harley MS 4431, a compilation, now in two volumes, produced for Isabeau (or Isabel) of Bavaria, the queen consort to Charles VI of France.  This manuscript was written and decorated under Christine’s supervision, and it is possible that some of the passages are in her hand.  The notable artists the Master of the Cité des Dames (see also Egerton MS 2709, Royal MS 19 E VI, and Royal MS 20 C IV) and the Master of the Duke of Bedford (see also Add MS 18850) were principally responsible for the illumination.

Harley MS 4431 was the subject of an AHRC-funded research project by the University of Edinburgh, in association with the British Library and the ATILF (Analyse et Traitement Informatique de la Langue Française), a unit of the Centre National de la Recherche Scientifique at the University of Nancy.  The resulting website provides images, transcriptions of the texts, a glossary of Christine’s language, and an admirable collection of further research tools.

The British Library has plans to exhibit the Book of the Queen in the Sir John Ritblat Treasures Gallery, but until that time, please check out the glories of the fully-digitised version here, and several of our favourite illuminations below. 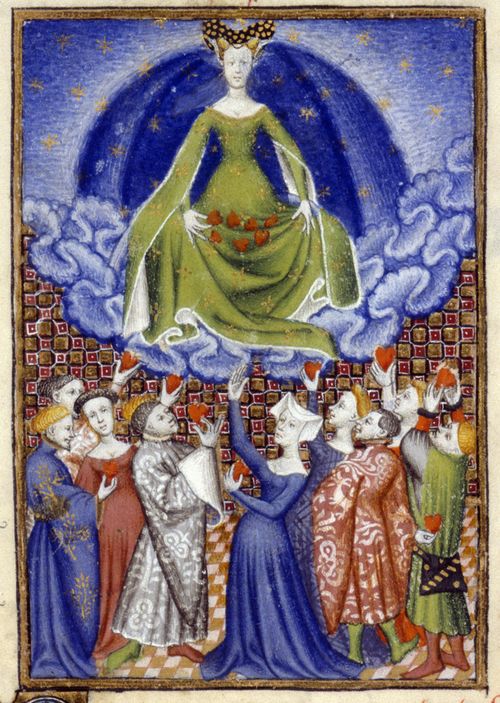 Detail of a miniature of Venus presiding over a group of men and women, who are presenting their hearts to her, from 'L'Épître Othéa', Harley MS 4431, f. 100r 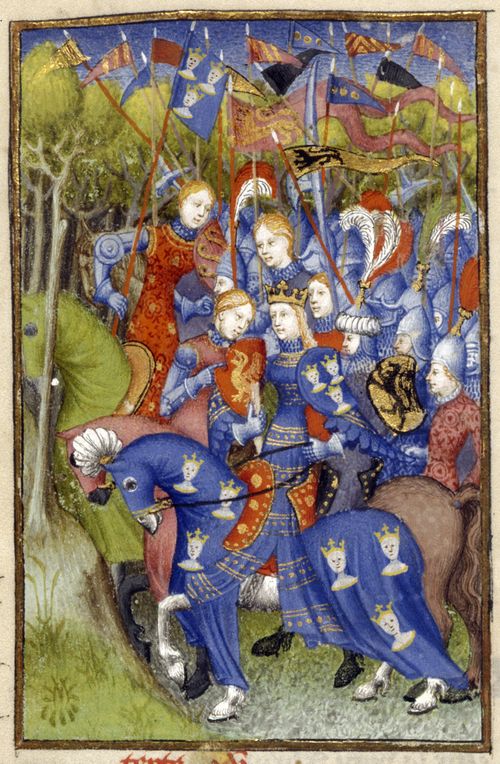 Detail of a miniature of Queen Penthesilea with and her army of Amazons riding through the forest to aid the Trojan army, from 'L'Épître Othéa', Harley MS 4431, f. 103v 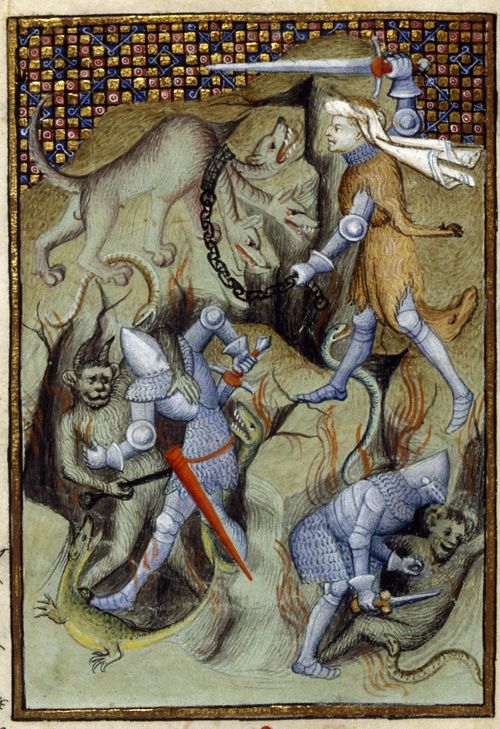 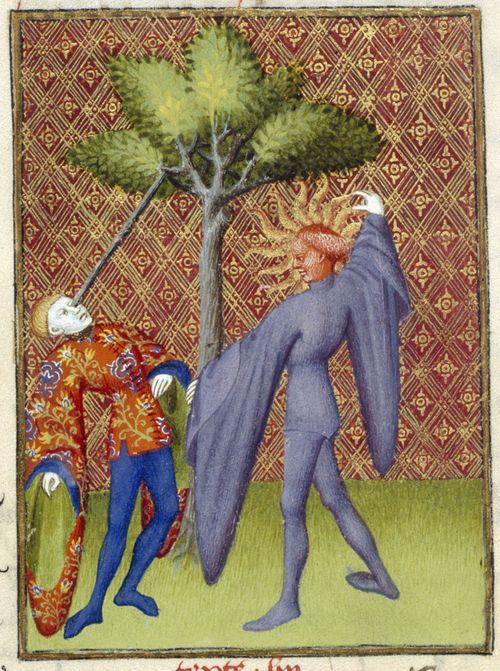 Detail of a miniature of Apollo killing Ganymede by piercing his eye, from 'L'Épître Othéa', Harley MS 4431, f. 119v 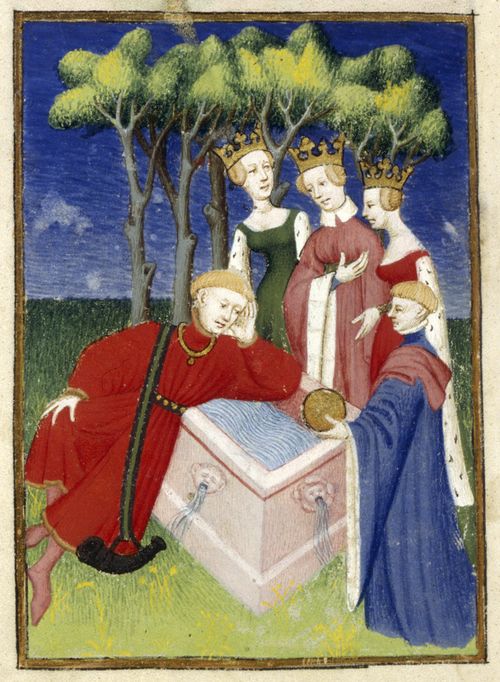 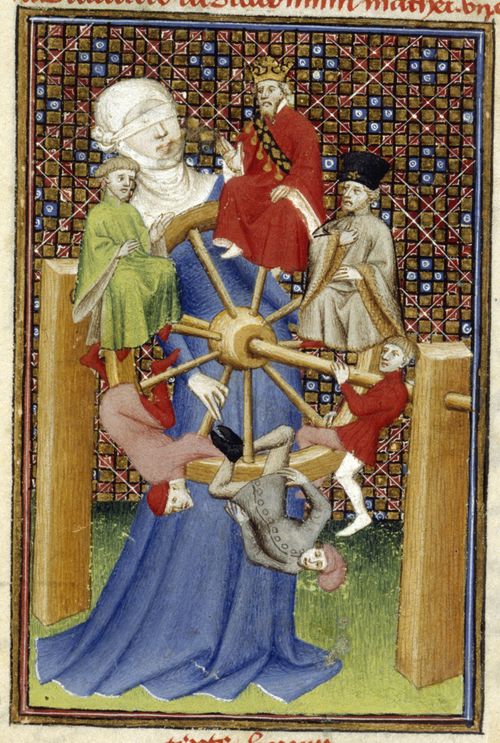 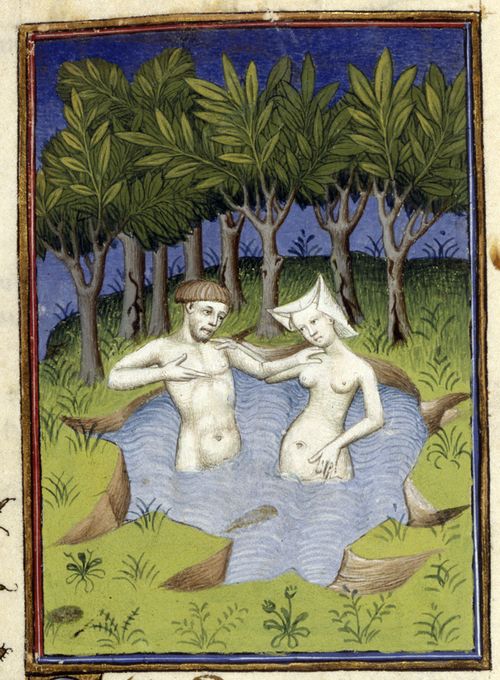 Detail of a miniature of Hermaphroditus and the nymph Salmacis bathing in a lake, from 'L'Épître Othéa', Harley MS 4431, f. 132v 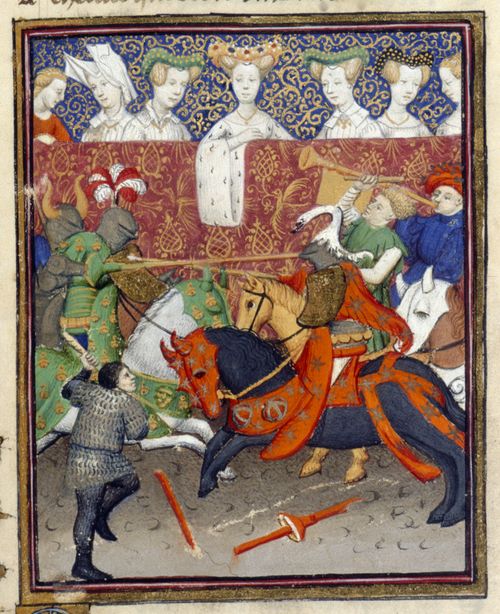 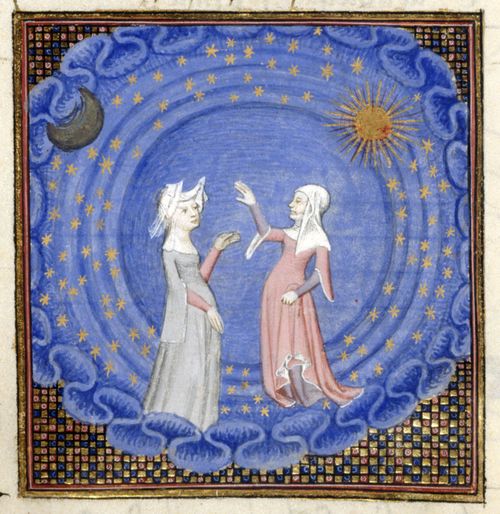 Detail of a miniature of Christine and the Sibyl standing in a sphere of the cosmos, with the moon, sun and stars surrounding them, from 'Le chemin de long estude', Harley MS 4431, f. 189v 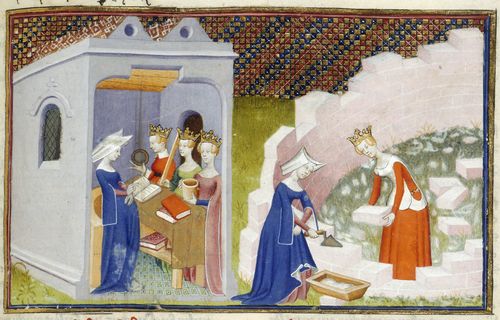 Detail of a miniature of Christine de Pizan before the personifications of Rectitude, Reason, and Justice in her study, and helping another lady to build the 'Cité des dames', Harley MS 4431, f. 290r

For the latest news and updates from the Medieval and Earlier Manuscripts team, be sure to follow us on Twitter @blmedieval.

O be still my heart! I can study these illuminations for weeks... Look at the clothing, the hair, the dogs! Love it x 100! Thank you for posting!

Thank you so much for the links and information. I came to this via an 'In Our Time' piece by Melvin Bragg on Radio 4. I'm fascinated by manuscripts, thank you. From a very interested lay person.