One of the most common types of enquiry we in the Medieval and Earlier Manuscripts department receive is whether or not a particular manuscript has been uploaded to the Digitised Manuscripts site (second only in frequency to the question of how we have gotten to be so fabulous).  This latter mystery has no simple explanation, but hopefully in future it will be easier to answer the 'Is it digitised yet?' question.  We have put together a master list of all of the manuscripts that have been uploaded by our department, including hyperlinks to the digitised versions; you can download an Excel version of the file here:  Download BL Medieval and Earlier Digitised Manuscripts Master List 04.07.13 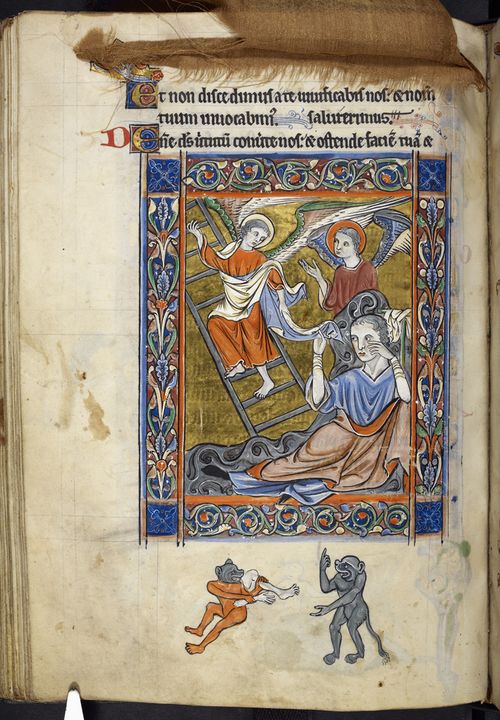 Miniature of Jacob’s dream of the ladder, before Psalm 80, with a curtain above, and a bas-de-page image of cannibalistic grotesques pointing to our spreadsheet, from the Rutland Psalter, Add MS 62925, f. 83v

A few notes - this list covers only material from the Medieval and Earlier Manuscripts collections, mostly items digitised as part of the Greek, Harley Science, Royal, and Medieval Manuscripts projects.  The spreadsheet is currently sorted by shelfmark, although of course you can do what you like with it.  We will be updating this list every three months, and the newest versions will be posted on this blog.

This is exactly what we want to see! Thank you. The format is ideal too; everyone can work with an Excel spreadsheet.

Feel free to add extra columns. Some of us know SQL.

Yesterday I was working with the Greek mss at the Bibliotheque Nationale Francais Gallica site. Looking through 43 of them, for kephalaia, actually, to get some kind of idea of statistical usage. I'd compiled a list from their search, and clicked through.

I need to do the same with your site, so this is very timely.

I think your list works better. I can wander up and down it, looking for relevant items, and be there with one click. The summary of contents is invaluable, by the way, and just the right level.

•B746, "Ecclestiastical history"; you could usefully add the author, "Philostorgius", to that.

By the way, I think your photography is better than theirs; the mss look noticeably clearer on the BL site.

Also your site seems to be faster, which is a blessing. I think their on-screen controls are better than yours, tho.

But somehow is Harley 5.

How does this list relate to the Catalog of Illuminated Manuscripts? Could you update the catalog entries to show that the manuscript has been digitised?