Dress Up for Halloween, Medieval Style

If Halloween has once again caught you unprepared, you may, like many of us, be desperately casting your mind about for a suitable get-up for this evening’s revelries.  Have no fear!  The Medieval and Earlier Manuscripts section would like to offer the following last-minute costume ideas:

A medieval fool:  some rags, a stick, a round loaf of bread, and a vacant expression are all that you will need for this particular get-up; see below. 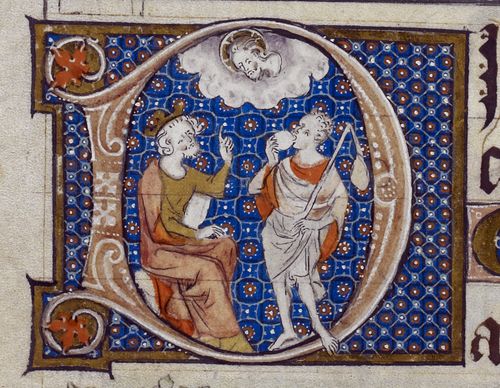 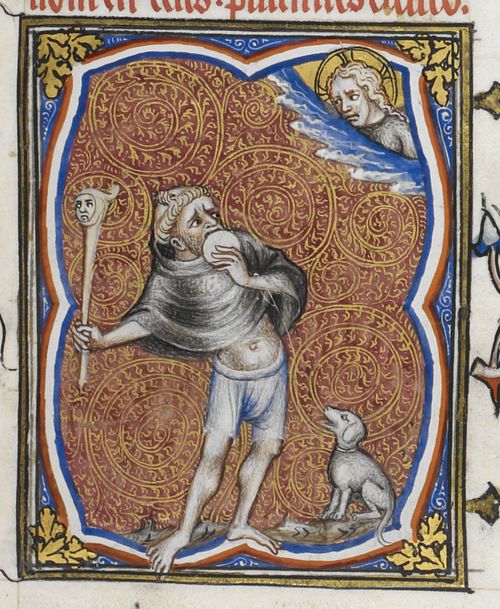 A memento mori:  Nothing could be easier!  Just wear a skeleton costume and carry around a banner reading 'Memento homo quod cinis es et in cinerem reverteris' (Remember, man, that you are dust and to dust you will return) and you will provide an instant moral exemplar for everyone you meet. 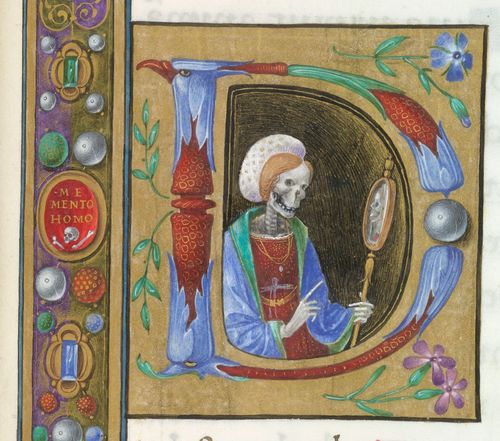 Detail of an historiated initial 'D'(ilexi) with a woman (Duchess Dionora?) with a skull for a face admiring herself in a hand mirror, and a partial scatter border with gems and flowers including the motto ‘Memento homo’, at the beginning of the Office of the Dead, from the Hours of Dionora of Urbino, Italy (Florence or Mantua), c. 1480, Yates Thompson MS 7, f. 174r

Vanno Fucci: This unlovely character is featured in Cantos 24 and 25 of Dante’s Inferno.  He stole treasure from the church of St James in the town of Pistoia, and accused an innocent man of the crime, who was then executed unjustly.  For his sins Vanno was condemned to an eternity of torment by the monster Cacus, who will attack him until the day of judgement.  This costume is a particularly easy one as it requires, well, nothing at all (except an angry monster and a willingness to abandon modesty).  Those seeking a slightly less revealing get-up may consider the damned soul being attacked by a serpent on the right, or perhaps, if you have a companion for the Halloween festivities, you might like to dress up as Dante and Virgil and wander around providing a moral commentary on all you observe. 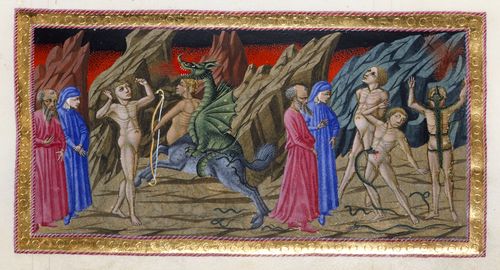 Detail of a miniature of Dante and Virgil witnessing Vanno Fucci, the pillager of a church in Pistoia, being attacked by the monster Cacus, who is half-centaur and half-dragon, and Dante and Virgil speaking to three other souls, tormented by snakes and lizards, in illustration of Canto XXV, from a copy of Dante Alighieri’s Divina Commedia, Italy (Tuscany, possibly Siena), between 1444 and c. 1450, Yates Thompson MS 36, f. 46r

If you are lucky enough to be possessed of a number of fellow Halloween revelers, we have several suggestions for group costumes:

Wodewoses:  you will need a number of hairy suits, some false beards, clubs, and a predilection to dance, but you are guaranteed to be the life of any party (warning: some other guests may attempt to set you on fire, so be wary). 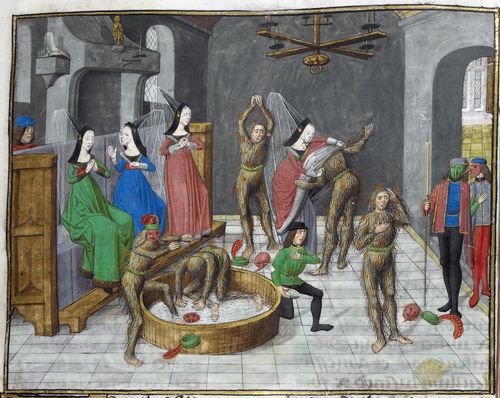 Detail of a miniature of burning costumes of the 'hommes sauvages' during a masked dance in Paris, at the beginning of chapter 32, from  Jean Froissart’s Chroniques, Vol. 4, Netherlands (Bruges), c. 1480, Royal MS 18 E II, f. 206r 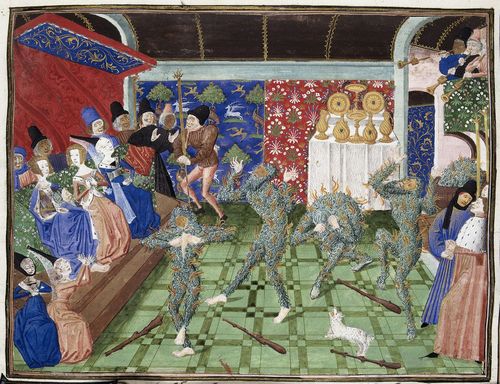 The Four Horsemen of the Apocalypse:  this group costume necessitates some horses (or horse substitutes), and a level of agreement about who will be assigned which persona.  For reference, they are as follows:  White Horse – Conquest (sometimes Pestilence), Red Horse – War, Black Horse – Famine, and finally the Pale Horse – Death. 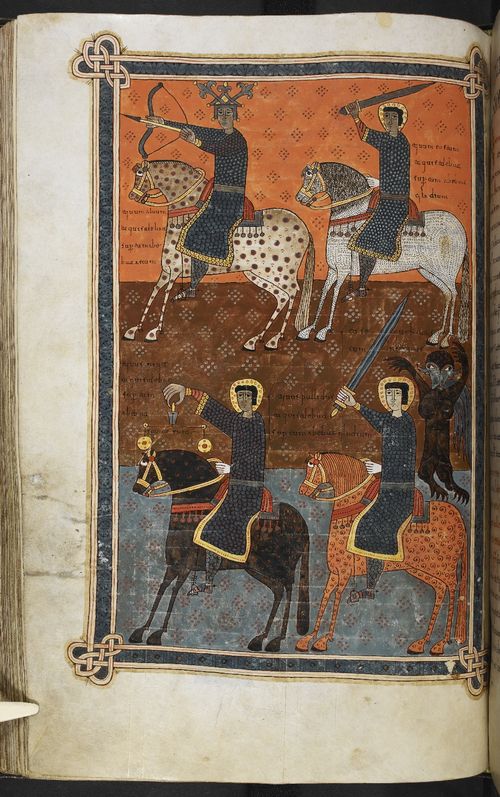 Personifications of the Seven Deadly Sins:  carrying off these get-ups successfully might require a bit more organization, the acquisition of props, and again, suitable mounts, but what could be more fun? 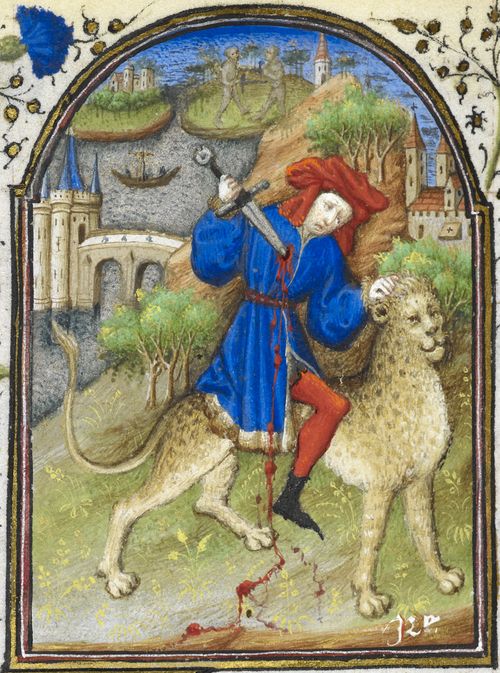 Detail of a miniature of a man riding a leopard and stabbing himself with a sword, as a personification of Anger (Ire), in the Penitential Psalms, from The Dunois Hours, France (Paris), c. 1339 – c. 1450, Yates Thompson MS 3, f. 165v Detail of a miniature of a wealthy man riding a wolf, carrying a sword and a chalice and followed by a servant with flagons of wine, as a personification of Gluttony (Gloutenie), in the Penitential Psalms, from The Dunois Hours, France (Paris), c. 1339 – c. 1450, Yates Thompson MS 3, f. 168v 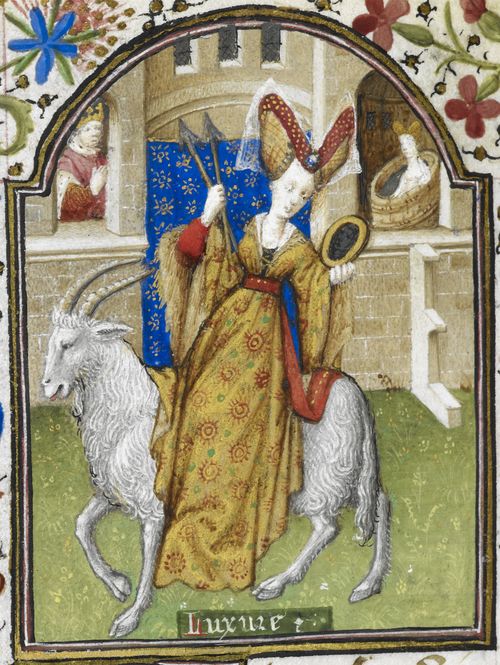 Detail of a miniature of a well-dressed woman riding a white goat, carrying arrows and a mirror, as a personification of Lust (Luxure); behind, David spying upon Bathsheba in her bath, in the Penitential Psalms, from The Dunois Hours, France (Paris), c. 1339 – c. 1450, Yates Thompson MS 3, f. 172v 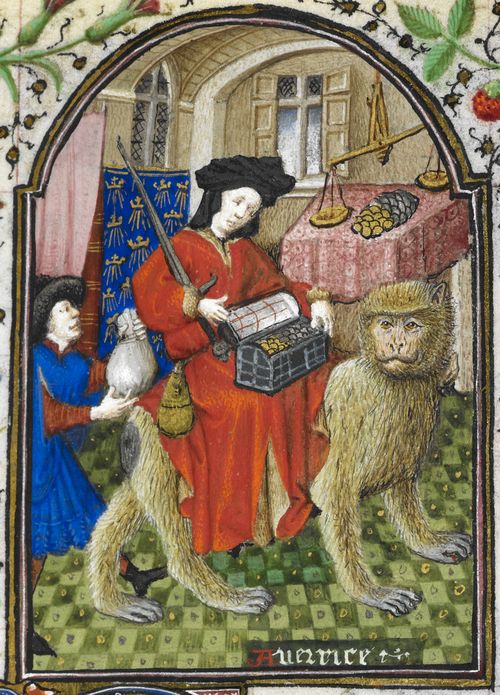 Detail of a miniature of a man riding an ape, carrying a chest full of coins, with scales and money on a table behind him, as a personification of Avarice (Auerrice), in the Penitential Psalms, from The Dunois Hours, France (Paris), c. 1339 – c. 1450, Yates Thompson MS 3, f. 174r

Please do let us know if you have any other suggestions for us; you can leave a comment below or on Twitter @BLMedieval.  And of course, if you proceed with any of these costume ideas, please please send us pictures!  Happy Halloween!