Sex and Death in the Roman de la Rose

Where can one go to witness the pursuit of the opposite sex, music and dancing, violence and beatings, and gratuitous nudity?  No, not a British town centre on a Friday night, but in the Roman de la Rose, obviously!

An exquisite copy of this important medieval verse romance – Harley MS 4425 – has now been digitised and is available for you to browse in its entirety on the BL’s Digitised Manuscripts website.  The Roman de la Rose was written in Old French by Guillaume de Lorris from the late 1220s up until his death in 1278, and completed some forty years later by Jean de Meun.  This manuscript was made for Count Engelbert of Nassau (1451-1504), a wealthy courtier and leader of the Duke of Burgundy’s Privy Council.  The artist to whom the decoration is attributed is known as the Master of the Prayer Books, and he and his studio were active around 1500.  He portrayed the author in one of the column miniatures: he is shown sat at a writing desk with his book before him, in the act of composition (see below for an image which will be familiar to those of you who follow us on Twitter @BLMedieval).  Note how the artist has set out the text in the author’s book in two columns, with spaces left for illustrations, exactly resembling this manuscript in a conceit that emphasises the figure’s status as author. 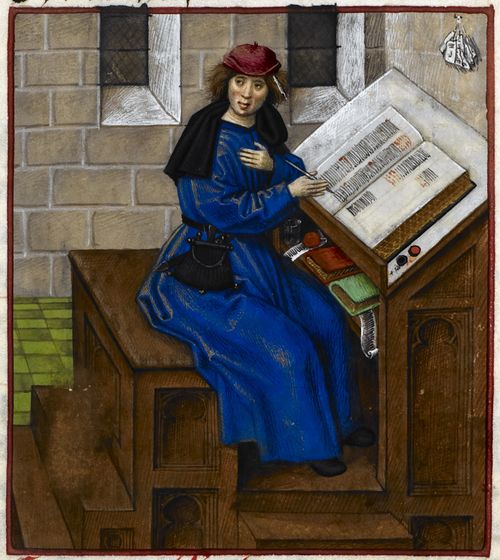 The Roman de la Rose is an allegorical poem about courtship, love and a gentleman’s pursuit of ideal love (represented by the rose), experienced in a dream by the narrator.  However, just in case you thought it was all ‘paddling palms and pinching fingers’, the miniatures that accompany the text reveal some darker elements to the story.

Running alongside all the displays of sophisticated, wealthy, aristocratic life, are rather more violent images, relating to stories and events in the text.  For example, there is quite a lot of fighting in the Roman de la Rose – a virtual panoply of brawls and murders (and it isn’t just the men slugging it out!): 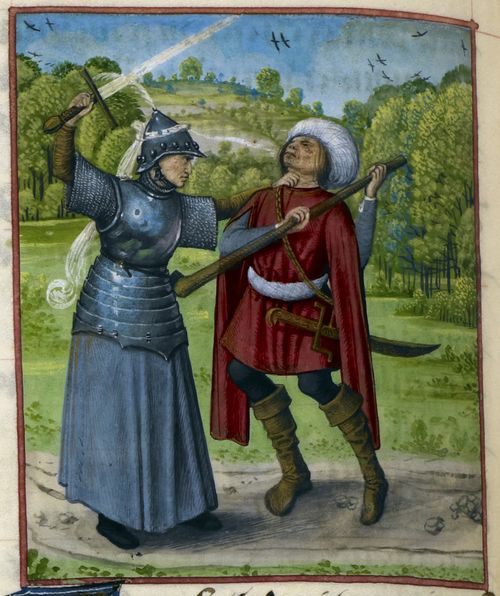 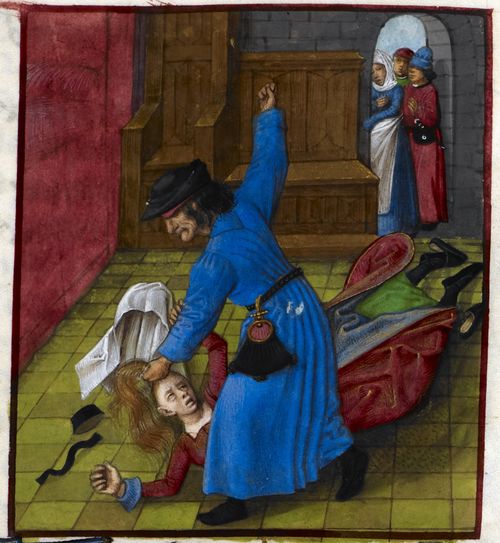 Detail of a miniature of a jealous husband beating his wife, while neighbours look on, Harley MS 4425, f. 85r 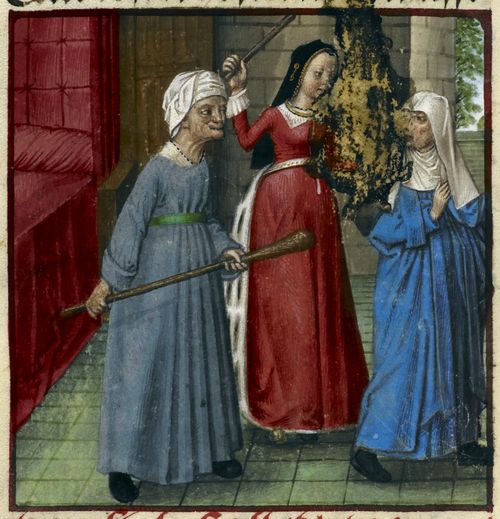 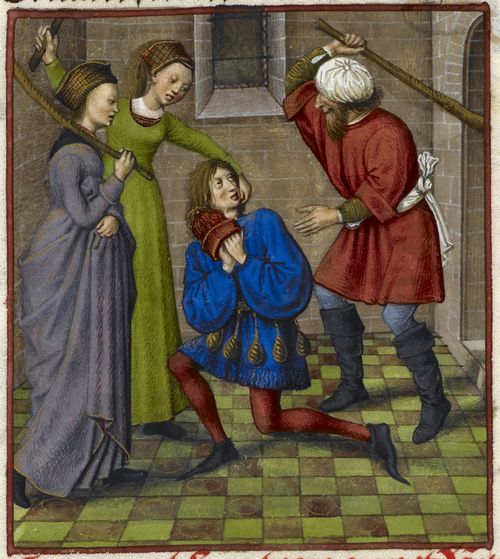 Below we can see two characters, Abstinence Contrainte (‘Forced Abstinence’) and Faux Semblant (‘False Seeming’) travelling in disguise: one as a Beguine nun (medieval cross-dressing!) and the other as a Franciscan friar. 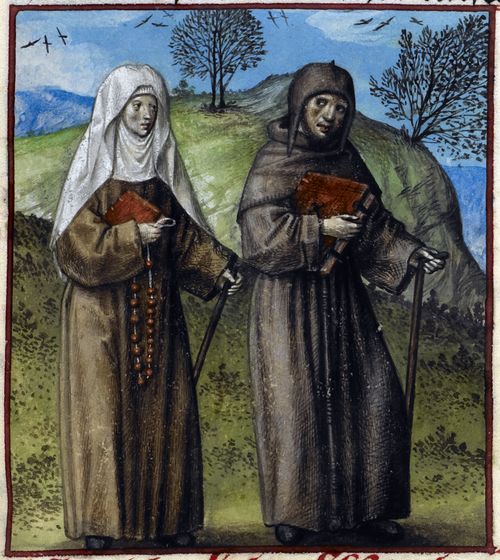 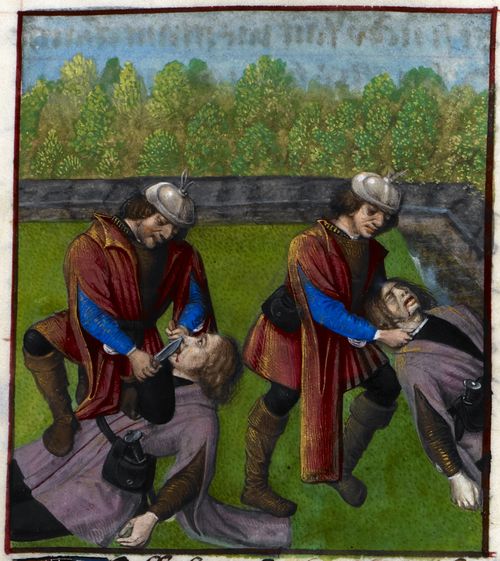 These two are on a mission to kill off Malebouche (‘Evil Tongue’, literally ‘Bad Mouth’) and, appropriately, cutting out his tongue before slitting his throat (above). 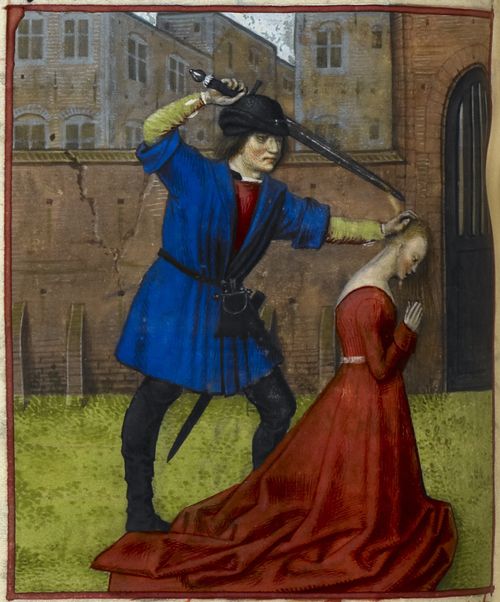 In another scene (above), we see a story relating to Appius Claudius Crassus, a member of the decemviri (a council of ten men established to institute new laws) of the Roman Republic around 451 BC.  In a tale originally related by Livy, Appius lusted after Virginia.  However, since the girl was thoroughly repulsed by his lechery, Appius had one of his men claim that she was his slave, in the very court over which Appius himself presided.  Predictably, Appius upheld the claims (which would allow him to then buy the girl and have his wicked way with her) – but her father, to defend her liberty and protect her from this sorry fate, decided it would be better to kill her, and so chopped off her head without further ado…which all seems a bit rough for poor, young Virginia! 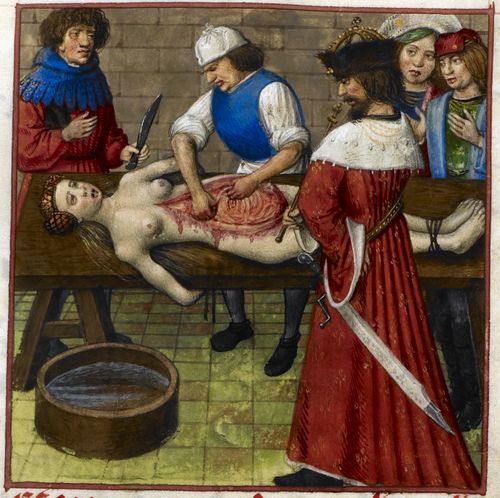 Detail of a miniature of Nero watching while his mother Agrippina is dissected, Harley MS 4425, f. 59r

Elsewhere, we see the grisly fate of Agrippina the Younger.  Having failed to murder his mother by means of a ship deliberately designed to sink, Nero pursued his matricidal ambitions by ordering Anicetus (Nero’s boyhood tutor and commander of the fleet at Misenum) and his men to murder her in person.  According to Tacitus, before she was stabbed to death, and realising her son was responsible, Agrippina cried, ‘Smite my womb!’.  The image here shows Anicetus or one of the others rummaging around in Agrippina’s viscera, while Nero looks on.  Tacitus noted that some accounts related that Nero wished to see the place where he had been conceived, and also looked upon his mother after her death and praised her beauty.  Those Roman emperors didn’t really go in for filial devotion. 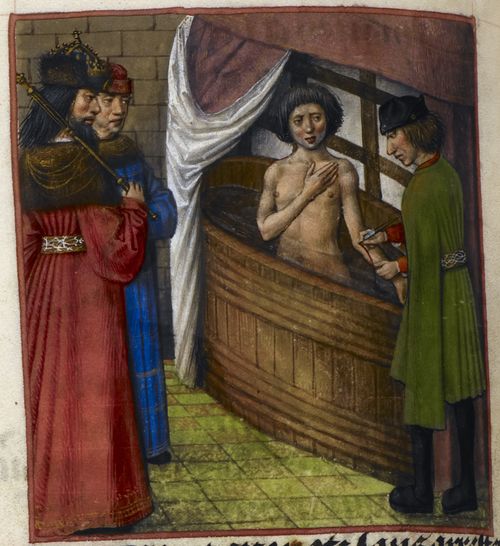 The verso of this folio depicts Seneca’s suicide (above).  Having charged Seneca with involvement in the Pisonian plot to assassinate him, Nero ordered Seneca to kill himself, which he did by opening his veins whilst in a bath.  The inclusion of Nero in the image may be derived from the account of his presence at Seneca’s death in the Golden Legend.

Other suicides – people literally falling on their swords – are shown as well: 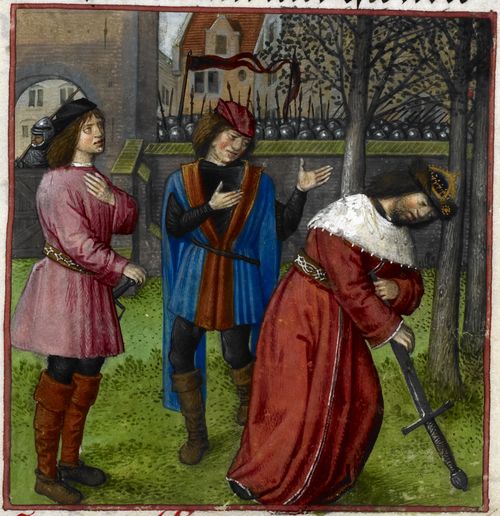 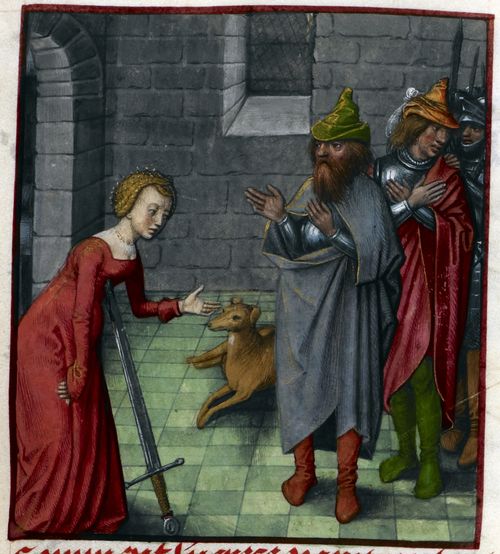 Detail of a miniature of Lucretia committing suicide in front of her family (and an attentive dog), Harley MS 4425, f. 79r 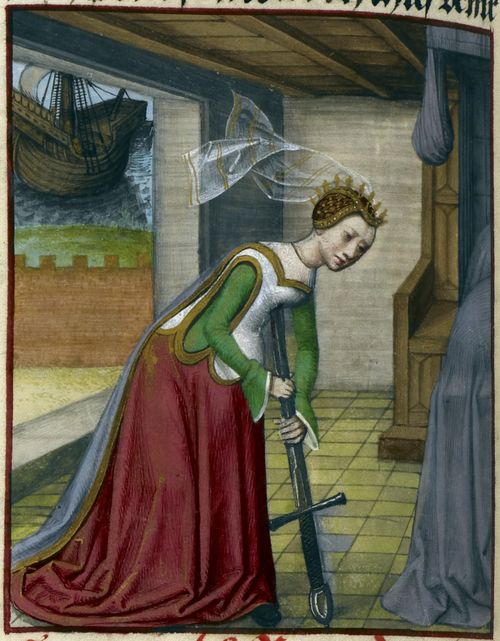 Detail of a miniature of Dido committing suicide as Aeneas sails away, Harley MS 4425, f. 117v

There’s also some nudity thrown in for good measure: 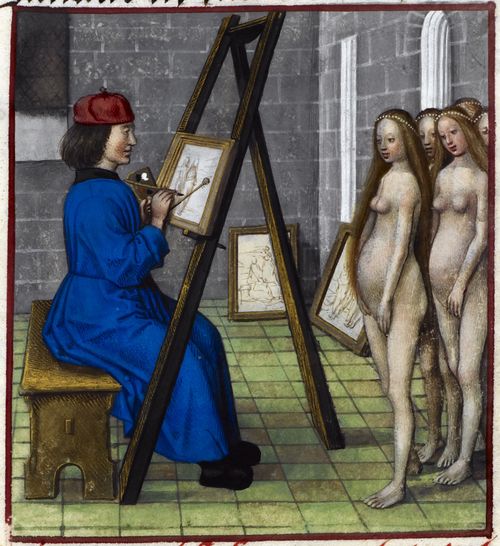 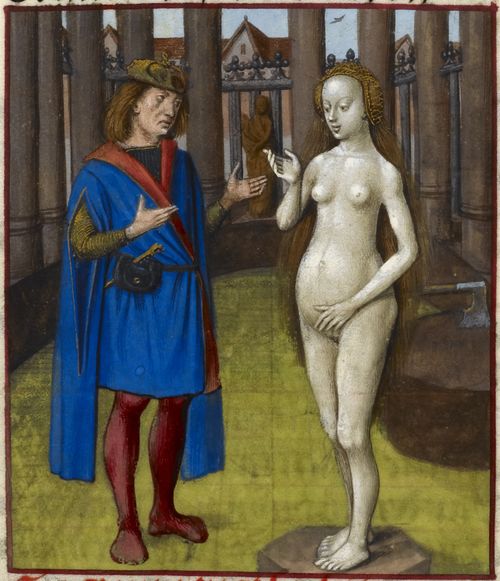 Perhaps after the reading the Roman de la Rose – what with all the courting and wooing, birds and bees, flowers and fruit trees, and the like – you find yourself with a few questions about the procreative act.  Well, the Medieval Manuscripts Blog brings you Sex Education, Medieval-Style.

Q. How are babies made?

A. By Nature, with a hammer, on an anvil. 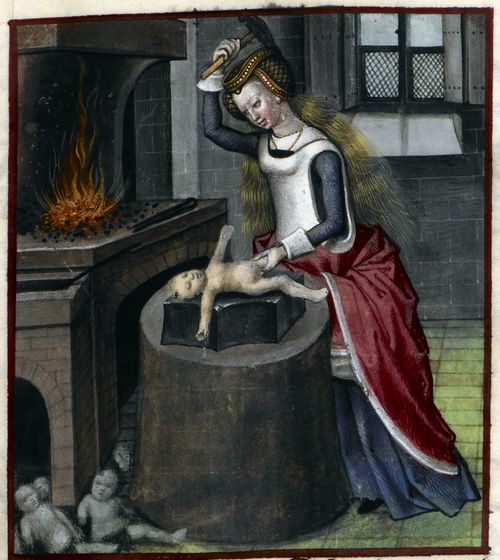 Detail of a miniature of Nature forging a baby, Harley MS 4425, f. 140r [see our post Royal Babies and Celebrated Infants for more on this miniature]

And there’s another depiction of people being created elsewhere in the manuscript…can you find it?

This manuscript also contains a number of extraordinary images of medieval dress and clothing styles, as well as a variety of depictions of the social classes.  Check out the blog next Tuesday for a post on these subjects, and still more from the magnificent Roman de la Rose.

Very interesting - I have become hooked on medieval art: What strikes me is the imagery which conflates a world where extreme brutality is never far away with a yearning for morality. In these times "art" was very powerful and so much more relevant to life than the contemporary and modern art promoted by Saatchi.