No Rest for the Wicked: Dante's Inferno

Dante Alighieri’s Divine Comedy is best-known for its gruesome catalogue of punishments suffered by the damned; and what punishments they are! Dante took great pleasure in devising hideous fates for the multitudes of the damned, and this included, for good measure, many people he knew personally. One can imagine that Dante relished sending to Hell those responsible for exiling him from Florence in 1301, not least because some of those named in the poem were still alive to read about the terrible fates in store for them. You have been warned -- be careful not to get on the wrong side of a poetic genius! 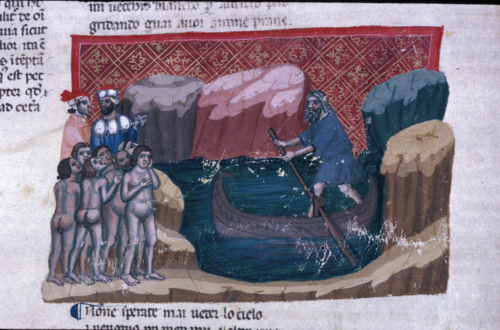 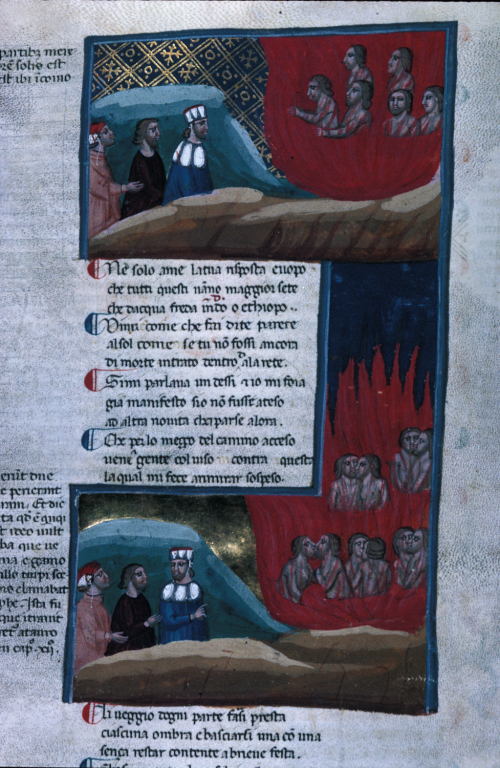 But the poem isn’t called the Divine Comedy for nothing. Latin Commedia at this time simply meant a narrative poem, albeit one with lighter tone and supposedly a happy ending. Inferno, the description of Hell, is the best-known part, probably because we all secretly love the scandal and gore, as well as Dante’s gloriously passive-aggressive sniping at his foes. Yet the Comedy presents a journey through the entire Christian cosmos, continued in Purgatario and Paradiso respectively. 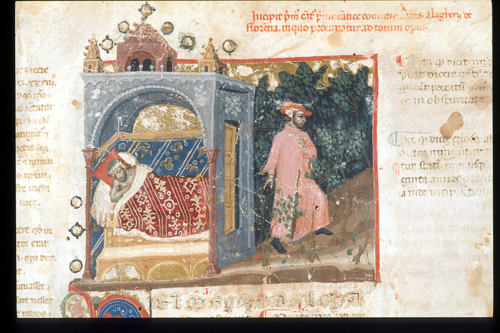 Humour is definitely an aspect of the poem appreciated by the illustrator of Egerton MS 943. This manuscript contains the entire Divine Comedy accompanied by 261 images, and was copied in the 14th century, not long after the work was composed, in the poet's Northern Italian homeland. Perhaps this manuscript's creators shared the same world-view which animates the poem, making it as close as possible to the way Dante would have illustrated it. Dante would certainly have appreciated the rendering of some of his imagined punishments. 145 images are currently online in the British Library Catalogue of Illuminated Manuscripts, and the whole manuscript will soon appear on our Digitised Manuscripts site.

Back to the torments of Hell. Here, for example, are the lustful, tossed around in a cyclone to represent their loss of reason, while Dante and his guide, the Roman poet Virgil, stand by in awe. 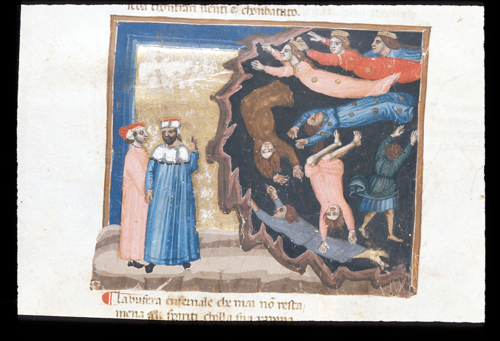 And here the gluttonous are feasted on by the monstrous Cerberus. They include a man called Ciacco ‘hog’ who describes the woeful state of politics in Florence. 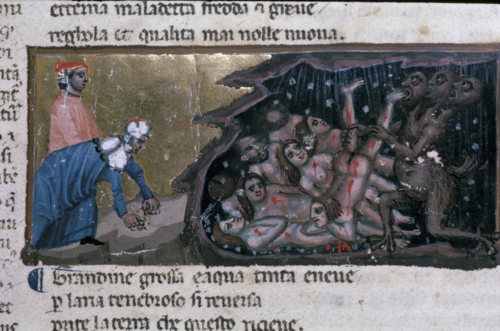 The violent drown in a flaming sea and are shot at by arrows. The poem makes the archers in question centaurs, but interestingly our illustrator neglects to give them horse bodies. 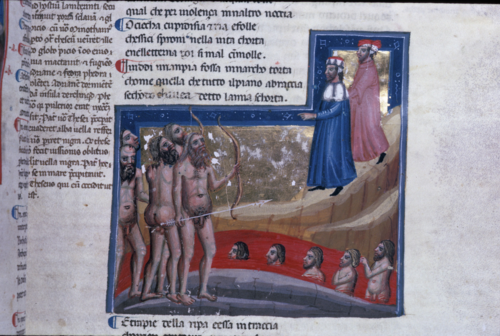 The treacherous are frozen up to their necks in ice. If anyone ever claims that something will happen when Hell freezes over, remind them that this actually happened in Dante's account! For Dante, Hell got colder as you went further down, representing the distance from God which is the true punishment for all the damned. 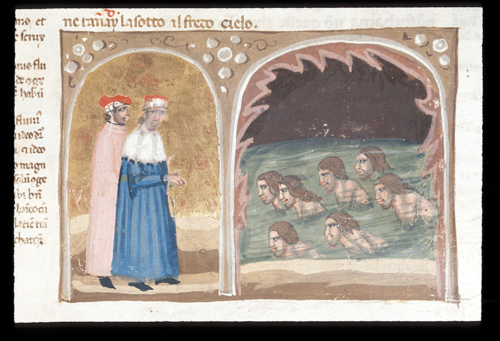 Here, the arch-traitor, the Devil himself, stands at the freezing heart of the Inferno. In contrast to the menacing figure in John Milton’s Paradise Lost, Satan is quite pathetic in the Divine Comedy. A monstrous three-faced entity, he is utterly immobile and cannot even speak as his mouths are occupied chewing on the three greatest traitors of history: Judas Iscariot (all we can see of him here is his lower half poking out of Satan’s mouth) and two of the murderers of Julius Caesar, Brutus and Cassius. It's ever so slightly ridiculous that Dante regarded Caesar's death of Caesar to be the second worst crime in history (after Christ' betrayal). But Dante, like so many of his contemporaries, saw imperial Rome as a lost golden age, and he yearned for the unification of the divided and troubled Italian states. For him, Italy's troubles could be blamed directly on Brutus and Cassius. 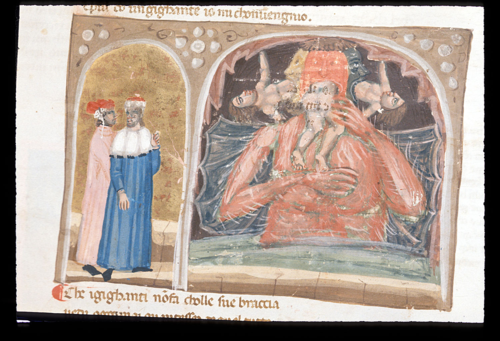 After Satan, our two intrepid wanderers are spat out through the plughole of Hell and onto Mount Purgatory. And then we move from Inferno, to the exciting sequel, Purgatario. Here you can see Virgil warming himself on Satan’s feet which are poking up from the ice! We will devote future blogposts to Dante's Purgatory and Paradise -- keep an eye on this blog!